It is a good day when you get a late evening email reporting an oystercatcher in Newfoundland.  Automatically one thinks Eurasian Oystercatcher, especially in spring when the natural winds are generating an air flow from Iceland.  It was Bruce Bradbury who can be thanked for exposing this record to the world. His sister in law Marilyn Gillingham at Lushes Bight, Long Island on the northeast coast of Newfoundland saw the strange bird and had Bruce B to report it to. According to her Birds of North American book it was an American Oystercatcher. BUT that is the expected ID path when using a North American book.  American Oystercatcher has not been recorded in Newfoundland but there are three previous records for the look-a-like Eurasian Oystercatcher.

I hummed and hawed at the ordeal of the long drive to Lushes Bight for a bird I had already seen twice in Newfoundland and had just seen them by the hundreds in Ireland in  February 2019.  With the Victoria Weekend on our doorstep there was lots of free time available.  I was torn. I wanted to explore the southern Avalon Peninsula for additional vagrants. I knew it had not been well covered during the previous week.  It was the European Golden Plover that I found on Friday morning in a farm field in  the Goulds on the outskirts of St. John's that cemented my mind to stay on the Avalon Pen on Saturday to search for more Icelandic vagrants. 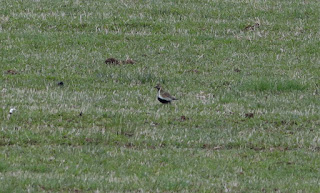 A serious search of the southern Avalon by Ken Knowles and myself on Saturday turned up zip-all. Such is the way when looking for Icelandic vagrants. Like veins of  gold these are hard to find birds. On Sunday I stayed on a short leash by personal choice near St John's.  The strong NW winds produced a small flight of Leach's Storm-Petrels in Conception Bay. Not sure if the winds had anything to do with a build up of small herring in a cove near Holyrood where 100s of gannet and a humpback whale were performing spectacular feeding techniques right next to the car. 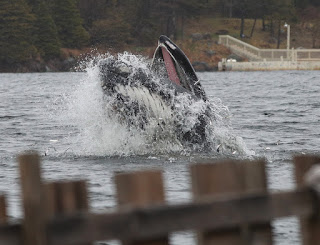 News of local birders going for the oystercatcher and being successful was becoming overwhelming.  On the Monday of the long weekend Ken Knowles and I headed out for Lushes Bight. The GPS said it was 550 km drive.  We arrived one hour before the the 10:30 ferry crossing. While in line  for the ferry two more cars of St John's birders arrived. 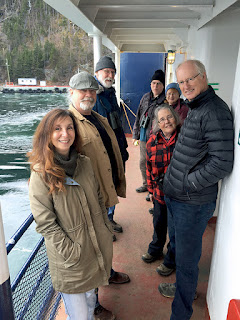 First off the ferry Ken and I drove the five minutes to Lushes Bight in three minutes almost squealing tires around the sharp bends on the hilly road. It was a picturesque community of less than 30 houses. It had a wharf or two. Some crab boats were tied up to the wharf. There was a lady in a black coat standing on the side of the road. She had a set of tiny binoculars around her neck.  We stopped to talk. She asked if we were birders looking for the oystercatcher. We said yes and she pointed "There".  BINGO.  The Oyc was standing in plain sight on a rock wall.  It was Marilyn Gillingham. It doesn't get easier than that. 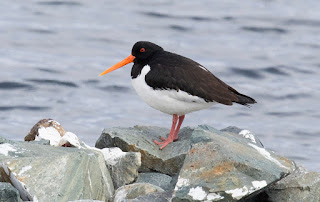 This picture alone is good enough to eliminate American Oystercatcher because it shows the blackish back nearly the same colour as the head. On male Eurasian Oystercatcher the back is nearly as black as the head. This one is thought to be a female based on brownish tinge to back and long bill (fide Anthony McGeehan) 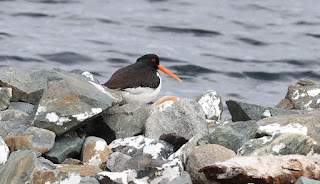 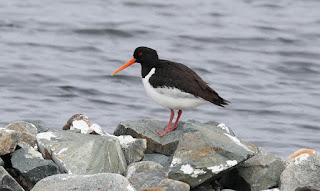 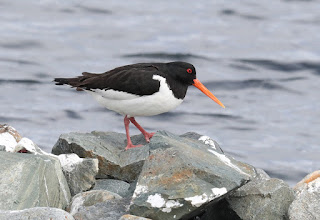 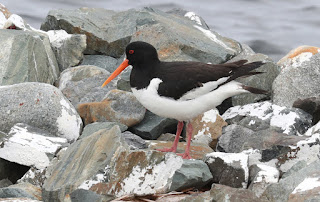 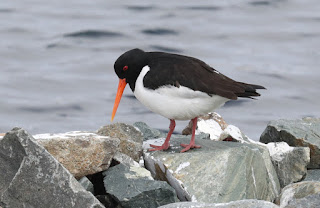 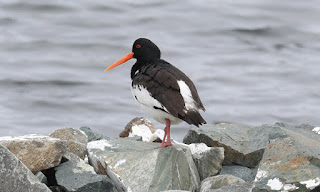 The white wedge up the lower back is very different from the dark back of the American Oystercatcher. 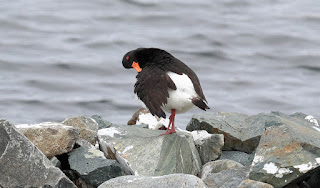 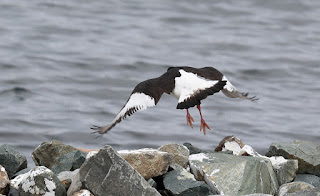 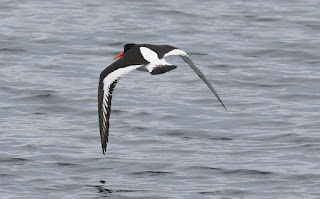 The huge white wing stripe is much stronger in the primaries then it is on American Oystercatcher. 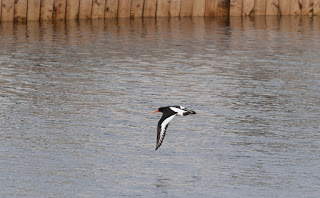 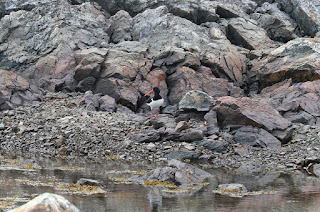 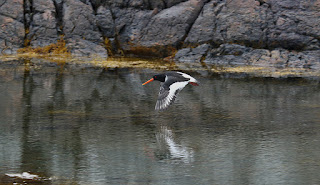 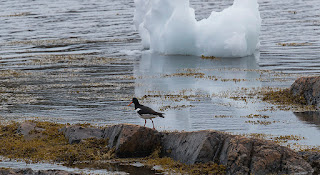 There were still remnants of the winter pack ice in the area plus icebergs as seen from the ferry. 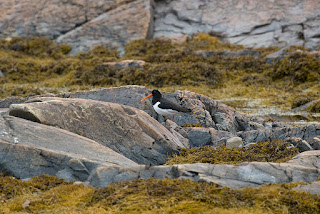 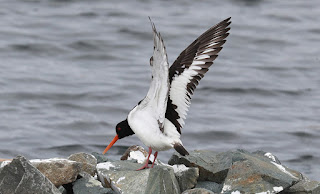 There are three previous records of Eurasian Oystercatcher for Newfoundland and Canada. 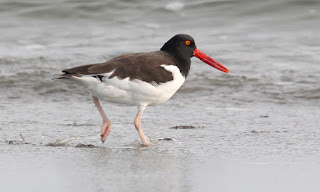 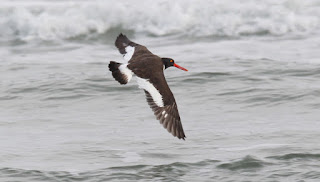 Posted by Bruce Mactavish at 02:50