Friday night into Saturday saw the first SW winds in Newfoundland for the entire spring it seems.  After two weeks of NE winds holding back spring migrants the dam burst in dramatic fashion. The Avalon Peninsula went from zero warblers to lots of Yellow-rumped Warblers, some Palms and a Black-and-white. There were even a few Barn and Tree Swallows. Ok it ain't no Pt Pelee but it was a beautiful morning on Sunday when the temperature soared to double digits (+10C) and bird song at Bidgoods Park in the Goulds was nothing short of walking through heaven. Singing warblers, newly arrived White-throated and Swamp Sparrows augmented the Fox and Song Sparrow's band, an American Bittern pumped away, snipe winnowed.  By night fall a cold front moved over and St. John's was under a freezing rain warning - back to normal. Spring was on Sunday.

A bonus rare bird showed up at the park. Lisa de Leon and Margie MacMillian discovered an EASTERN PHOEBE on Friday afternoon. On Sunday it was singing up a storm. It was advertising to any female phoebe in the area that it found the perfect home with two bridges over a creek to chose from.  However, it is singing in vain since phoebes are less than annual on the Avalon Peninsula. Small numbers probably breed in SW Newfoundland but there is still no confirmed nesting record for the province. The bird was easily found and enjoyed by most St. John's area birders. 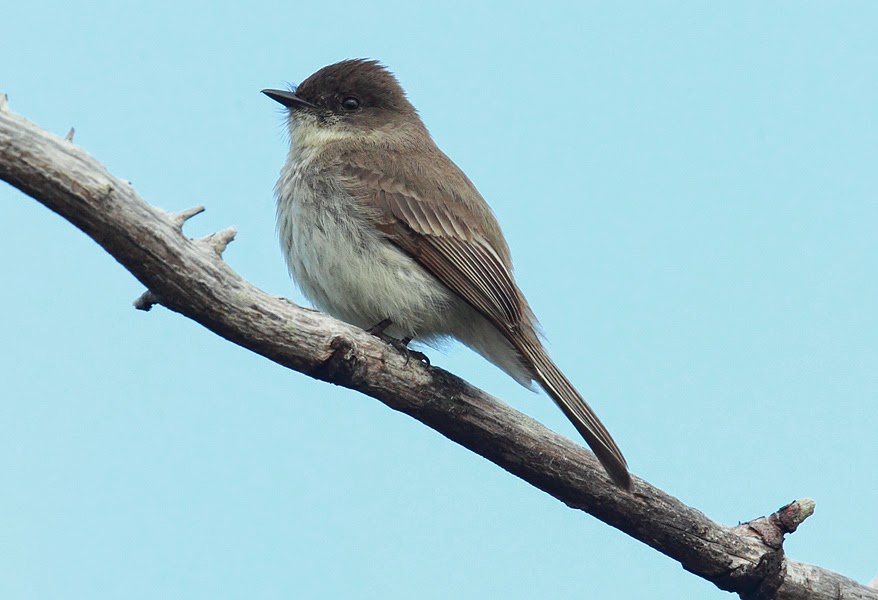 The Eastern Phoebe surveys his newly found domain over the creek at Bidgoods Park. 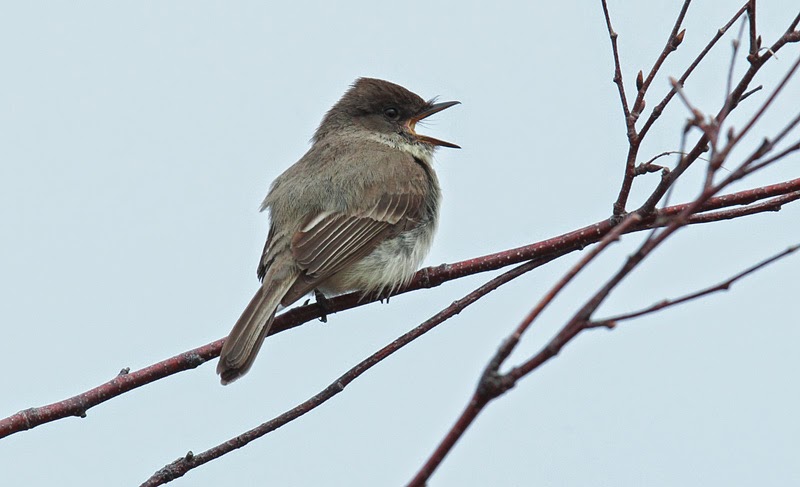 It sang ardently from a couple of favourite perches. 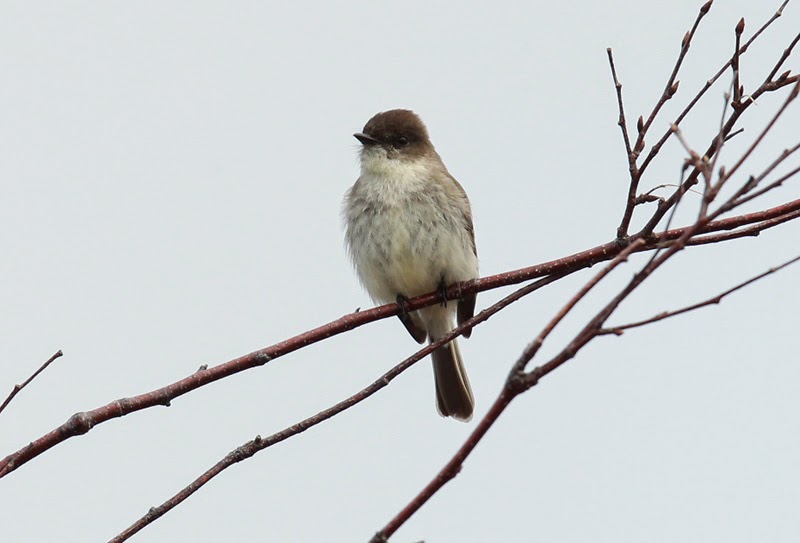 Not much of a looker really, an Eastern Phoebe is all about character. 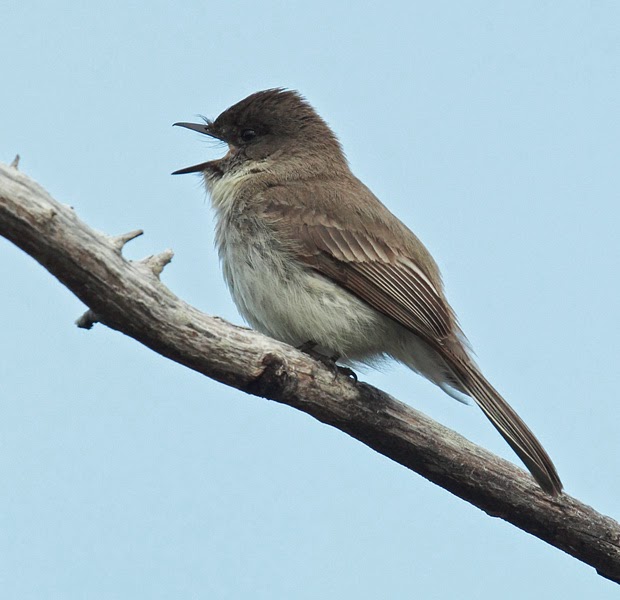 A Rusty Blackbird also dropped in for a couple of minutes before flying on. Rustys are from time to time seen at Bidgoods but so are Common Grackles. There were several grackles in the area on Sunday.  Both Rusty Blackbird and Common Grackle are uncommon birds on the Avalon. Grackle is locally common in eastern St. John's and can occur anywhere on the Avalon, usually in or near a community and often at a feeder. Rusty Blackbirds live in the woods usually farther back in from the roads than birders venture. So Rusty Blackbird is the better bird for year listers.  Because of the light experience Avalon birders have with blackbirds, Common Grackles are sometimes misidentified as Rusty Blackbirds.  Part of the confusion in fuelled by the Sibley Guide which shows the male Rusty Blackbird with a bluish tinge to the head. In the field one very rarely, basically never sees any colour to the head. Whereas, adults grackles show a strong blue iridescence to the head. Highly visible on the ground, not so easy to see in flight. Grackles come in two sizes, the male and female.  Both have long keel shaped tails but it is less evident in the females. The songs and calls of Rustys and grackles are distinct as well but similar if one is not familiar with them.  The bill on the Rusty Blackbird is very slim and short compared to the business like heavy bill of the grackle.

Good luck getting your year tick Rusty Blackbird. Bidgoods Park is not a bad place to see them during migration but I don't think they nest there. They do nest around some ponds farther inland on Powers Road. 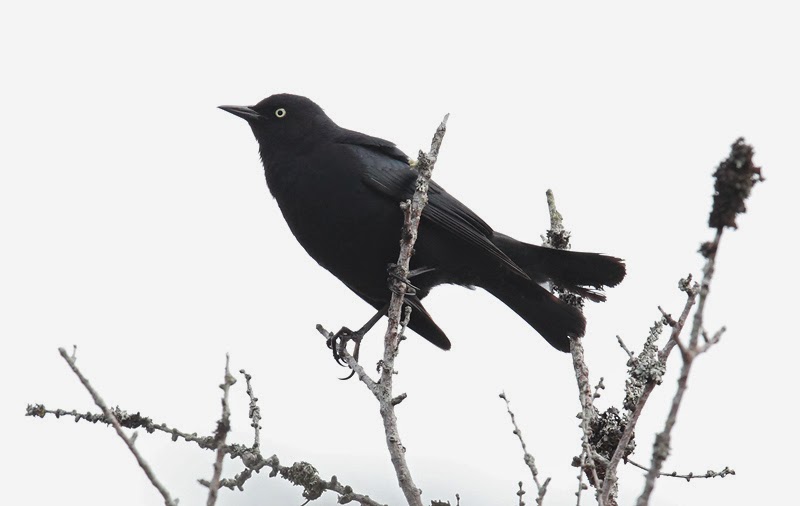 Note the short thin, almost delicate bill of the Rusty Blackbird and subdued iridescence to the bird including the head. 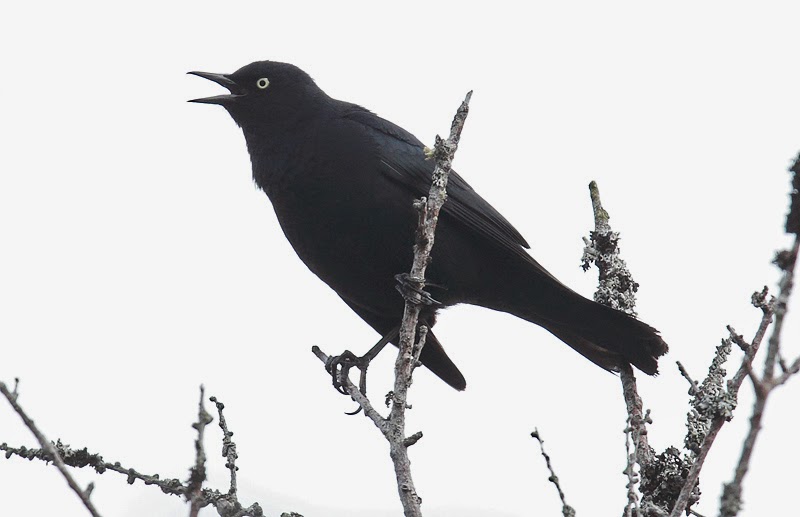 The Rusty Blackbird sang a few times before flying on up Powers Road. 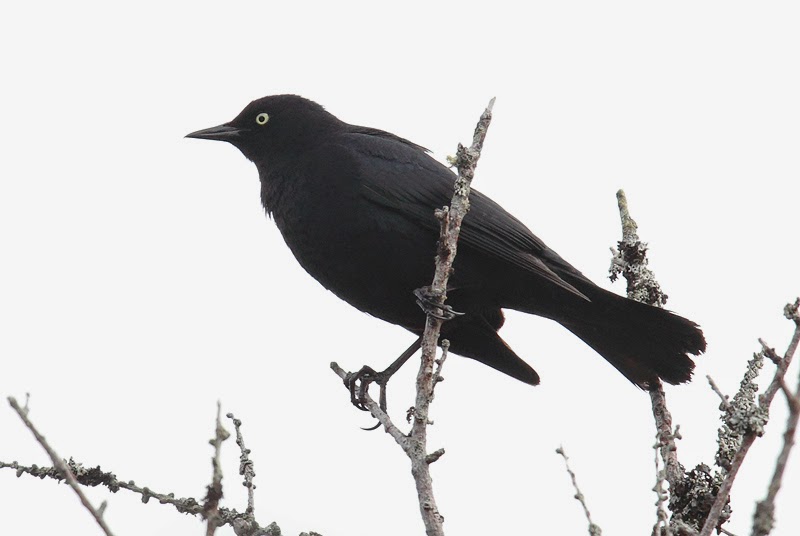 The normal blackbird proportioned tail is evident here.  A Rusty Blackbird is not likely to be mistaken for a grackle.

Posted by Bruce Mactavish at 21:58