The rush of Icelandic Vagrants continues to burn uncontrolled.  No new huge megas but it is intriguing that the the farm fields in the Goulds (outskirts of St. John's) seem to turning into a staging area for the Eurasian Golden Plovers. The feeding is good here. The fields are vast relatively speaking on a Newfoundland scale. Numbers have never dropped over the last week or so, only stayed the same or increased. Today the numbers reached a new high when visiting birder Paul Sykes (Georgia) had 43 in the standard plover field on Cochrane Pond Road and 40 more plus a BLACK-TAILED GODWIT on Cox's Lane. The BTGO was new, #10 (!!!) for the spring in Newfoundland. Totally off the scale of anything in recorded history.

The Cox's Lane site seems to be just a temporary field.  I visited that field before and after PS and saw no shorebirds. I'd like to see that godwit, after all it has been about nine days since I've seen one. You must know the feeling?

The NE air flow continues. It is not strong but the complete lack of head winds and frequent good tail winds to help Icelandic migrants veer toward Newfoundland and Labrador has lasted twelve consecutive days. This is something of a record and the forecast is more of the same.  This party is far from over. The rarity binging continues. Spring 2014 is breaking records left and right with no end in sight.

May 6 dawned with 5 cm of fresh wet snow on the ground  in St. John's! A shock to everyone but the kind of atmosphere Iceland Vagrant Hunters associate with good birding.  I had time to check out some of the fields in the Goulds. The Cochrane Pond Road flock of 43 GPs were in shock too. These shorebirds have probably never seen snow before

I went back to Cochrane Pond Road in the early afternoon with Ontario birder Ross Harris.  At first there were no GPs to be seen but then we heard them. They were flying high over head. For ten minutes we tried to follow them as they flew in wide circles around the fields.  Really seemed like they wanted to leave.  Alvan Buckley saw at least 25 in the field in late afternoon so they probably did not leave yet.  But it will happen eventually.

The flock of 43 European Golden Plovers sleeping off the morning nightmare of 5 cm of snow falling on their field over night. 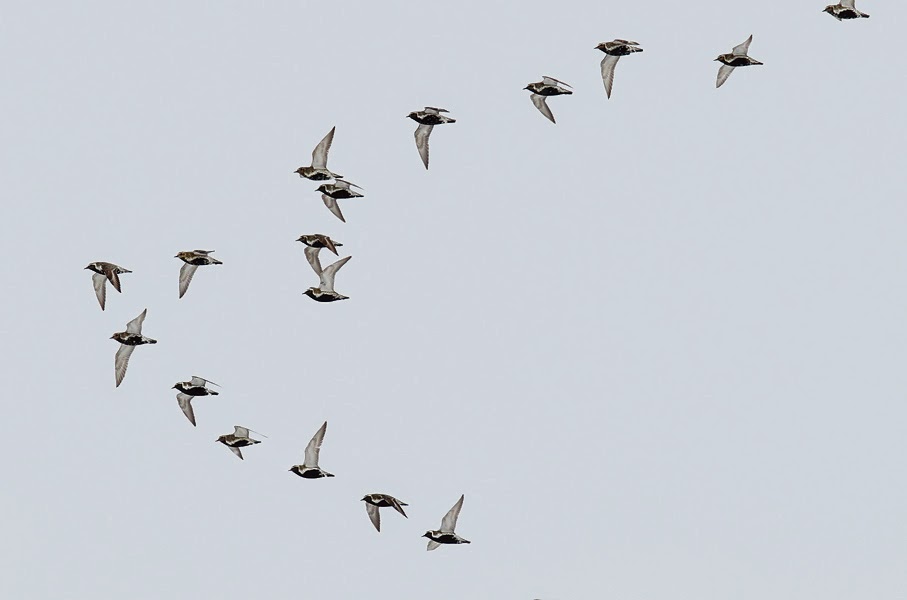 A few hours later the plovers were flying in broad circles over the farm fields. Some of them were singing spring display songs. 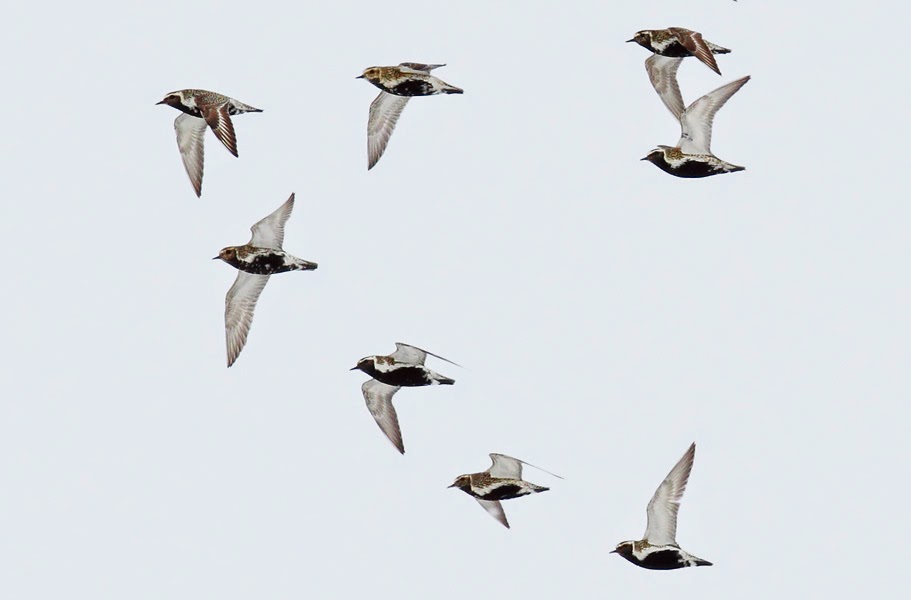 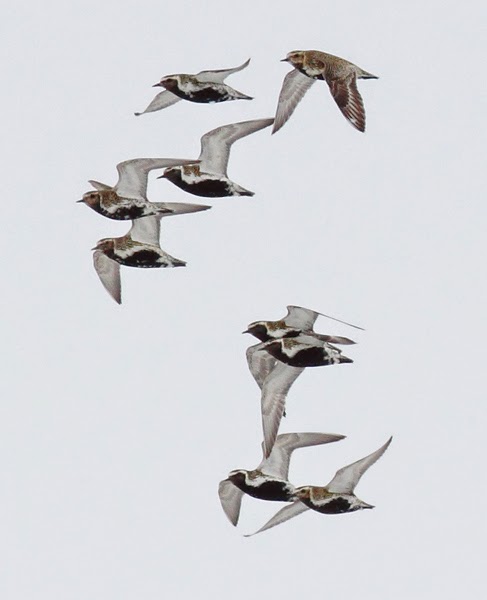 Blow ups of the birds flying over our heads calling.

Northern Wheatears have a leading roll to play in this monumental displacement of Icelandic migrants. I feel short-changed having seen only three so far. Wheatears have the knack of vanishing into thin air. This male and female found by John Wells at Ferrryland on the past weekend make up 66% of the wheatears for me this spring 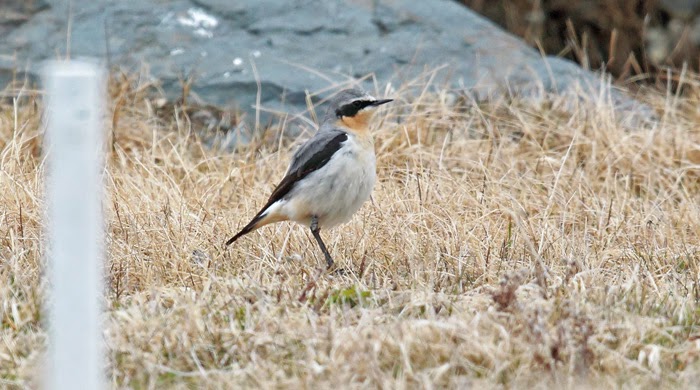 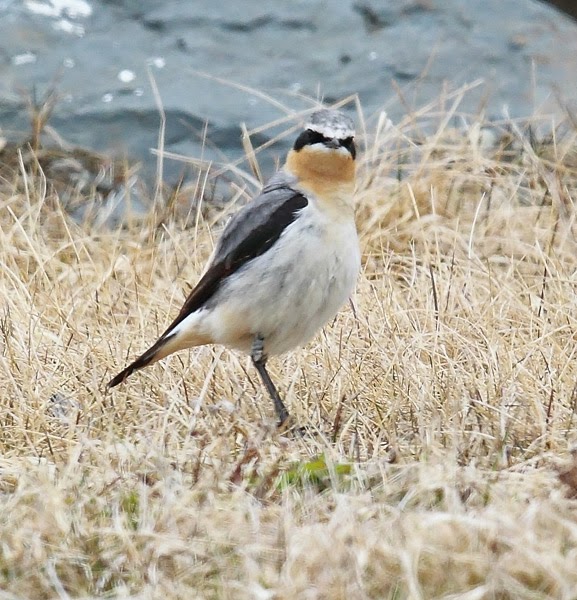 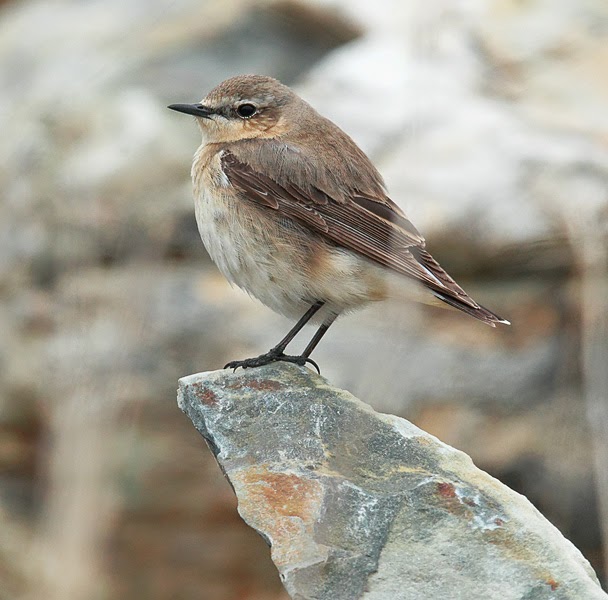