Usually on January 1st birders are rushing around town to cash in on left over rarities from the previous year to pad the start of the list for the New Year.  Often there are some pretty significant rarities to see. For instance on Jan 1st 2012 there was a Pink-footed Goose and Townsend's Warbler for the ticking.  Jan 1st 2014 had basically nothing important to look for. A Red-throated Loon in St. John's harbour is an odd winter location but the species is easy to tick if you go the right places in October.
I started the year at Cape Spear. There was a very meagre seabird flight with 20 Dovekies and small numbers of Common Eiders. A Northern Shrike along the road was interesting because they have been scarce this year.  After checking the harbour then some places for robins (none) there was nothing left to do but hang out at Quidi Vidi Lake. There were a couple of thousand gulls on the ice. They were all sitting down on their legs because the wind was so cold. There was not much change over. 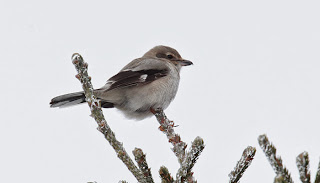 This immature Northern Shrike was chasing Black-capped Chickadees by the Cape Spear road.

The wind was cold enough that even the Iceland Gulls had to sit down to keep warm.

This photo contains one Lesser Black-backed Gull, six Iceland Gulls and two Herring Gulls. The pale Iceland is pretty good example of the 'glaucoides' race. It has been hanging out at the west end of the lake. 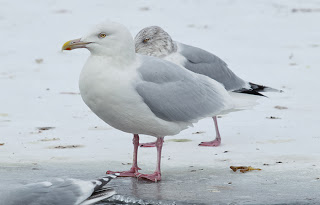 Some adult Glaucous Gulls have nearly no winter head streaking. This one had faint streaking on the forehead between the eyes. Nearly all winter adult Glaucous have a pink base to the bill like this bird. The pink is replaced by yellow for the breeding season.

There were several carcasses of regurgitated Dovekies out on the ice. The larger gulls swallow them whole at sea and later regurgitate the left overs at loafing sites such at Qudi Vidi Lake. Other gulls often pick over the leftovers. 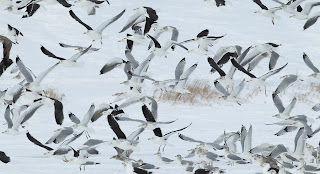 A distant Bald Eagle spooked the flock. This pictures shows a few examples of the wing tip patterns of Newfoundland Herring Gulls. 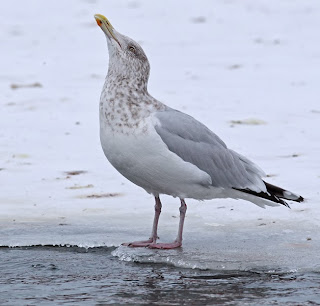 This Herring Gull is praying for a break, even a short break, from this prolonged cold snap. 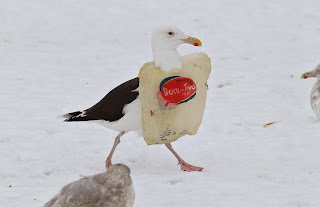 There was a Boxing Day Sale on Great Black-backed Gulls at Quidi Vidi Lake today.