It was a nice October weather weekend. Saturday morning Ken Knowles, John Wells and I started at Cape Race. Lots of seabird feeding action off the Cape including 1000+ Great and Sooty Shearwaters, a few hundred Razorbills, lots of kittiwakes and gannets, 3 adult Pomarine Jaegers but no migrant/vagrant passerines in the grass.  With low hopes of finding passerine vagrants we skipped most of patches of tuckamore we might otherwise check along the road when there is hope of finding something. One place we never pass by is the Hooded Warbler Tuck. It is the best patch of 'woods' on the entire Cape Race road.  We had just two birds here, an Orange-crowned Warbler and a WHITE-EYED VIREO. The vireo was kind of thrill we hope for on the Cape Race road.  The looks were brief but good as this skulker stayed in the thick stuff.
White-eyed Vireo was the star of the weekend.  It seems to be part of a new, albiet light, influx of new birds to the Avalon.  A number of other Orange-crowneds and a couple of Nashvilles and other odds and ends were seen in places that were pretty birdless last weekend. Strong South winds tonight (Sunday) might bring us some more interesting birds. 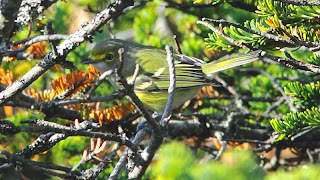 The White-eyed Vireo in The Hooded Warbler Tuck on Cape Race Road on 26 Oct 2013.  It was rarely this much in the open during the 10 minute encounter.  Photo opportunities were very brief and in far from ideal poses.  This shot was major luck.  The next best shot was much worse.  White-eyed Vireo is just less than annual in the province. There are a dozen or so records, mostly during October with a few in November and one in December. 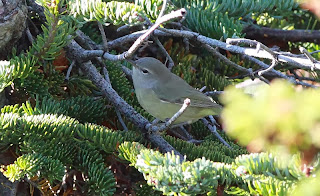 Orange-crowned Warbler in The Hooded Warbler Tuck on Cape Race Road on 26 Oct 2013.  This is a scarce but routine Oct/November bird on the Avalon Peninsula. 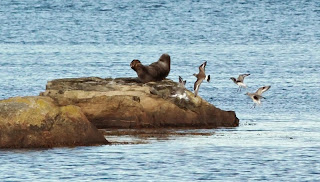 Move over seal!  This Hudsonian Godwit with a threatening long bill and four Black-bellied Plovers had no effect on this resting seal at Renews on 26 Oct 2013. They landed on the adjacent rock. 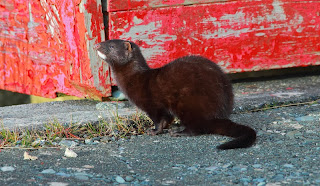 This unusually tame mink at the Cape Race lighthouse turned up its nose at Ken's offering of chicken from his sandwich. 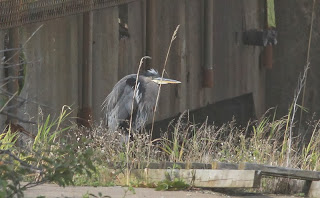 A sad looking, out of habitat, Great Blue Heron by the dry dock in St. John's harbour on 27 Oct 2013 was a low excitment vagrant but fits in with the sense that there has been a small influx of new birds to the Avalon because of recent SW winds.

Posted by Bruce Mactavish at 15:36