I was fortunate to have a seat on a plane surveying for marine mammals in Eclipse Sound, Baffin Island in mid October. We are talking about the northern end of Baffin at 73 N.  Pond Inlet was our base.  Birding opportunities were all happenstance.  Around the community of Pond Inlet Common Raven was the only common species.  It would have been the only species except that Eclipse Sound was still open so there were patrolling Glaucous Gulls.  The other species seen at the town site were three Black Guillemots, one white Gyrfalcon on a quick fly by and a female-type Hoary Redpoll.  While birding opportunities were restricted to making the best of the survey situation, the scenery was the 8th wonder if not the unrecognized #1 wonder of the world.  It was like a pizza topped with everything = Rocky Mountains, glaciers, icebergs, Arctic seas and moody skies. 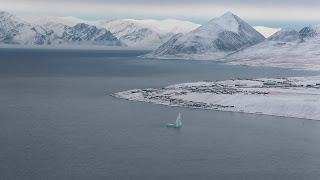 The northern-most community on Baffin Island.   Pond Inlet has a panoramic view of Eclipse Sound. Photo from a plane looking east. 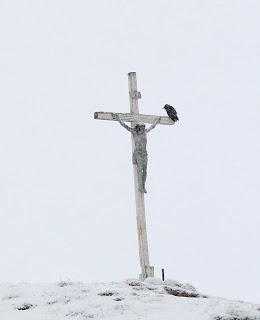 Raven has long been considered sacred by people of the Arctic. As a result the species is much tamer in most of the Arctic than anywhere in southern Canada.  Here one rests on a symbolic sacrificial cross during a light snow fall. 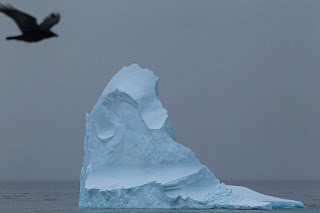 Spot the raven on the iceberg.  This is the same iceberg present in the first photo but here taken from the town site. 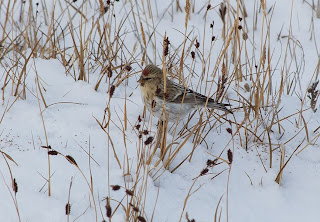 A small passerine at the latitude of Pond Inlet (73N) on the verge of intense winter and total darkness seemed like a vagrant. But the high Arctic race of Hoary Redpoll (hornemanni) was the perfect candidate for the last passerine to head south. It was a large and heavy redpoll with a long, deeply notched tail.  Unfortunately I had only my 28-135 mm lens since I was about to get on the survey plane. It was only 3 metres away. 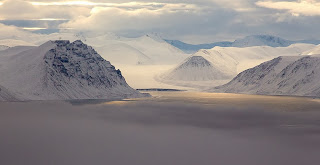 You feel like the origin of the planet earth is staring you in the face when flying around northern Baffin Island.  Only an IMAX camera could hope to capture the full scene. 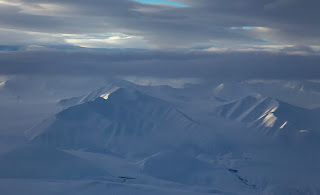 The northeastern extremity of Baffin Island in mid October. It is unlikely man has ever or will ever step on the land within this snap. Raw Planet Earth.

Posted by Bruce Mactavish at 20:41