On 10 Oct 2013 I was showing Rolph Davis from Ontario some local St. John's area birds. It was a classic beautiful sunny October morning. We went to Torbay to see if the amazing worm-eating Yellow-crowned Night Heron was still patrolling the lawns.  Piece of cake, it was, and it extended the latest date for the species in Newfoundland. Knowing we were in the midst of a Northern Wheatear event we decided to head for Cape Spear for a look for one. Taking the shore road out of Torbay to avoid morning rush hour we turned off on Marine Drive. Not even a minute down the road and this bird came flying up the road at us -cuckoo?, what? yellow belly and dark undertail - WESTERN KINGBIRD!! It flew over the car and we turned suddenly on to a dirt lane.
Bottom line. For the next hour we searched for the bird but couldn't find it. It was excellent kingbird habitat among a scrub field.  There was lots of bird action and in a gravel parking lot we did find a NORTHERN WHEATEAR. Bonus Bird. Spent some time enjoying great views of this bird.  It even landed on my car. 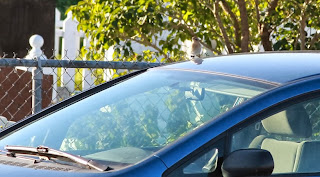 Northern Wheatear on roof of car.
We continued birding on to Cape Spear and area without any more unexpected birds. Back in the office for the afternoon.  Postings on the nf.birds site indicated people were seeing the Northern Wheatear and Lancy Cheng had refound the Western Kingbird on Seaview Place, pretty well exactly where we'd seen it first.  An hour later the cell phone rang. A bumbling Dave Brown was on the line saying something absurd like "do you want to see a Scissor-tailed Flycatcher?" He and Ken Knowles had gone to see the Western Kingbird.  They taking pictures of it on a wire in bad light when Dave noticed there was something funny about this kingbird!! The rest is history.
I managed 90 km all the way down Kenmount Road where you are lucky to reach the 50 km speed limit most of the time because of heavy traffic. Got green lights all the way home. Well they looked green.  Adrenalin does that to ya. Had to go home first to get my big lens.  City traffic is so so slow when your body is racing at warp speed.
The rest of the afternoon was spent with the bird. It was often invisible in thick foliage. It was never real close. But everyone who came saw it, at least 20 people, mammoth twitch Newfoundland style. It was a short tailed bird, an adult in heavy moult.  At times the yellowish wash appeared to spread across the belly. While I was kicking myself severely for having messed up on a great discovery, I could see how it was very Western Kingbird like at time. Thank God Lancy refound it. Which set off Ken and Dave after the bird which ultimately lead to the correct identification and a lot of happy faces. All is well that ends well. This was only the second for Newfoundland but the first was seen only by a canoeist in central Newfoundland years and years ago. We've been waiting a long time for this bird. 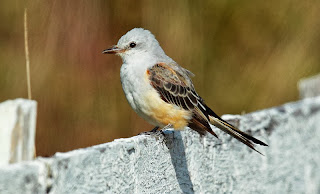 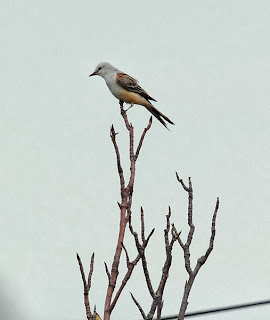 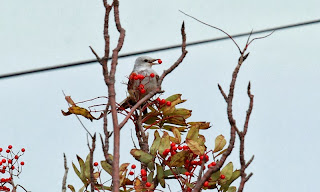 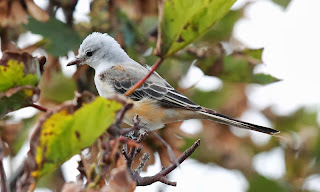 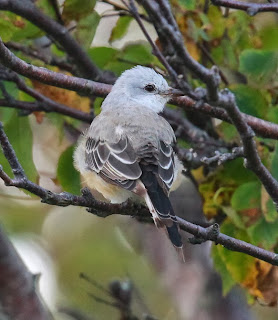 Note old faded and fresh dark feathers in the wing and tail - two generations of feathers indicating it is an adult.  A juvenile would have a uniform set of these same feathers. 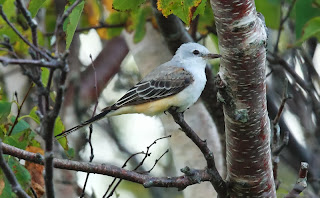