Abnormally tame birds are often injured or sick birds. Fighting their physical problem may compromise smart thinking and natural defenses. This Black Guillemot feeding by a walkway in Kelligrews today is an example of such a sick bird. There was no obvious sign of injury but the disheveled plumage and location are strong indications there is something not right with this bird. Such birds do not make prime photography models but it is difficult to resist taking a few snaps of the usually wary and difficult to photograph Black Guillemot in winter plumage. It was interesting to watch it feeding under water. It was poking its head into rocky crevices apparently looking for fish. It came up with two small, long skinny fish (blennies?) during the 10 minutes that I watched. 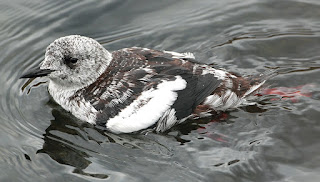 Posted by Bruce Mactavish at 11:16