It was the third day of NE winds with periods of rain, drizzle, fog and even sun. Today it was RDF. John Wells and I started at Cape St. Francis hoping to see a concentration of seabird leaving the confines of Conception Bay. We arrived at 8 am and faced thick fog. We could barely see the surf breaking on the rocks. There were however flocks of Dovekies flying over the surf and out around the tip the Cape. Over the next hour and fifteen minutes we waited. The fog started to lift a couple of times only to come back. Vis was up to 300 m for minutes at a time. We saw hundreds Dovekie, about 100 Great and Sooty Shearwaters and plenty of kittiwake, some gannets and murres. Also a loose group seven jaeger, probably all Pomarine, some still had the spoons.

We moved to Kelligrews. No fog but the seabirds were way offshore. Good numbers of shearwaters and some jaegers but too far away to enjoy. We gave up on that and birded around St. John's. Lots of gulls at Bally Hally and Quidi Vidi Lake but still no sign of a Yellow-legged Gull yet this fall. We did however come across the first Common Gull of the season. It was in the gravel parking area near Pier 17.
.

Not seen in flight but aged as a 2nd winter bird based on the dull bill and legs plus small white tips to primaries, though there appears to be a very large mirror on P10. 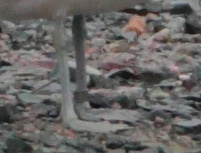 A closer inspection of the photo revealed the bird is BANDED. Hopefully it will stay around long enough to read the band. Previous banded Common Gulls and for that matter Black-headed Gulls in St. John's have been banded in Iceland.
Shortly after dropping JW off at home he phoned saying he'd just seen a NORTHERN LAPWING fly overhead while walking to grocery store.  Searched until dark but no sign.  Perhaps a hint of what is to come from the winds currently blowing westward across the Atlantic.
﻿
Posted by Bruce Mactavish at 14:50