Dovekies are Back in Force


Took advantage of a day off work and drove the Southern Avalon Loop (counter-clockwise). I escaped the rain in St. Mary's Bay and St Shotts but the wind was still very strong. Not a great day to find birds. No vagrants seen.  Of all things, Dovekies saved the day. There were a few flying east past Pt LaHaye in the WNW gale. I checked out Kielly's Cove wharf at Gaskiers thinking these Dovekies and other birds might be hugging the coast on their way out of the bay. Well just a few Dovekies were flying by that shoreline but around the derelict concert wharf were 15 or so Dovekies feeding away madly just like a day in January.  I parked the car on the wharf and pulled out the camera for a good hour of entertainment.

The dark skies and rough water bouncing the birds around like corks meant using at least ISO 1000. Now after reviewing the pictures at home I should have gone higher.  A few OK photos came out of the effort.  It was nice to see them up close again.  They paid no attention to the car parked on the wharf. I could see them flying under water along the floor of the ocean by the wharf.  The air was filled with their chirps.  Yes it felt like winter! 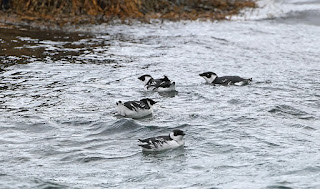 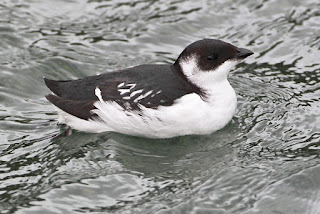 After a period of feeding the Dovekies stayed on the surface just long enough for half a breath before diving again.