Another Pacific Eider in Newfoundland - 12 April 2020

The Pacific Eider (Somateria mollissima v-nigrum) is the race of Common Eider breeding in the western Canadian Arctic, Alaska and eastern Russia.  They winter in Alaska and eastern Russia. It's near mythical occurrence in the North Atlantic has change considerable in the last five years or so. It has now become just about annual in winter where eiders are scrutinized on the Avalon Peninsula, Newfoundland. There have been one or two highly suspected or confirmed records of Pacific Eider in each of the last five years.  The commonly accepted speculation is that they are making it through the central Arctic island because of less ice during the summer in recent years.  Some are reaching the Atlantic side and coming south to Newfoundland to winter. This could be just the tip of the iceberg as there are many thousands of Common Eiders wintering north of the Avalon Peninsula off the coast of Labrador and even Baffin Island. Who knows what percentage of those might be Pacific Eiders?  I posted much better photos of a Pacific Eider at Cape Spear, Avalon Peninsula, NF in March 2018 blog.  https://brucemactavish1.blogspot.com/2018/03/carrot-billed-eider-at-cape-spear.html

It is still important to document the occurrences of Pacific Eider in the Atlantic. On 12 April 2020 I came across one on the Cape Race road, about 1 km east of Portugal Cove South, Avalon Peninsula.  In the bright early morning sunlight its orange bill stood out like a beacon among a group of ten borealis Common Eiders feeding 150 m off shore or 225 m from the car. For the next hour I tried to get as many pictures as I could to document the record.  It wasn't close and a shimmer in the air over the cold water was increasing as the sun rose higher preventing tact sharp pictures. All these pictures are 100% crops. 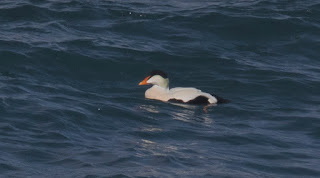 The orange bill glows like a neon carrot in the sunlight. Note the curved black cap (straight on borealis, our regular wintering eider). Black border of bill starts out broad at the top and comes to a point. It is more uniformly narrow on borealis. Pacific Eiders show a diffusion of green along the border of the cap. It was hard to see on this bird. It was mostly blown out in the bright sunny whites in the photos, but was there. It could be seen through the scope and appears in some of the following photos. There is also a more pronounced forehead bump. 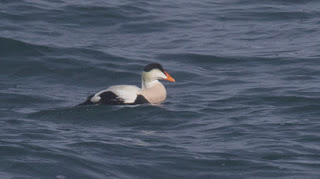 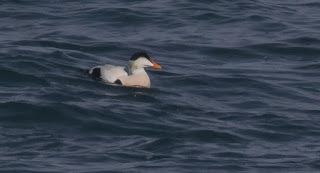 Compared to borealis, the black of the crown comes down further over the forehead, while the frontal lobes are shorter and even more sharply pointed. 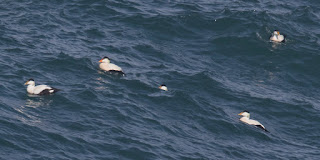 Pacific Eider is a bigger bird than borealis. Note the obvious difference in the shape of the lower edge of the black cap being strongly concave on the Pacific and quite straight on borealis. And that bill colour! 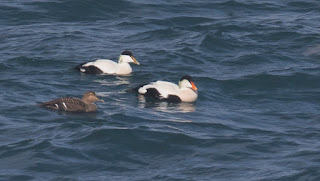 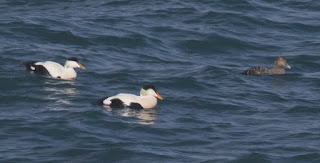 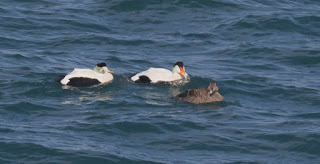 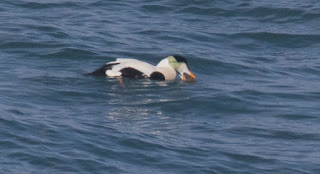 The famous black V on the underside of chin is typically impossible to see unless the eider rears up and flaps its wings which eiders frequently do during the day.  And as I discovered when mouthing large sea urchins trying break off the spines. It typically went for the big urchins and struggled getting them down. The other eiders were eating smaller urchins and had little trouble downing them shortly after reaching the surface. Very rarely borealis have this black V but the suite of other features will separate an adult drake Pacific Eider when seen well. Yet it is still the finally detail we like to see when confirming a Pacific Eider. , 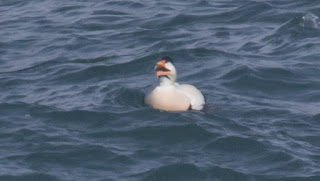 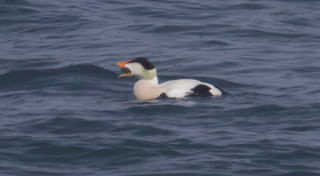 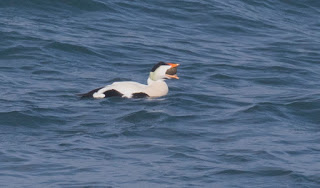 Posted by Bruce Mactavish at 08:20