March 18, 2018 was a good day for eider watching at Cape Spear, Avalon Peninsula, Newfoundland. March is  usually the best month for eider numbers on the Avalon as the pack ice covers much their feeding areas on the northeast coast.  After a good morning flight of eiders close by the rocks and trying for flight shots in the heavy snow squalls with poor results, I went back in the afternoon when the snow was supposed to let up.  The eiders were no longer flying but a flock of 120 was feeding by the rocks and the light was getting good as the sun broke out in the western sky. In the mornings we are looking east into the rising sun at Cape Spear. Not good.

I got down on the rocks and manged to get unusually close to the eiders by keeping out of sight. The photo opts were the best. There was one female King and a male dresseri among the standard borealis  but it was the superb opportunity to get excellent photos of our always wary common borealis eider that I was happiest with. Then strings of eiders started arriving from the south and without hesitation joined the flock until there were 1500 eiders. They all started swimming toward my hiding place in the rocks.  The sun had gone out and the snow squalls were starting up again but I was not going to miss this. Amazingly the eiders did not notice my head and camera peering around my rock as they started diving. I was firing off the camera at full tilt not even looking at what eiders might be in the shots. I was wanting as many good examples of borealis  as I could get. There were a few adult drake Kings in this flock also.

Then down the long lens in the flurry of mad snapping I caught the sight of a bright orange bill on a Common Eider. It was the Carrot Bill sign we are always on alert for. It could mean the so called Pacific Eider, also known as v-nigrum, from the western Arctic.  I kept the camera pointed on this bird with the finger down on the hammer just in case this was the real thing. I didn't risk trying to find it in the scope or even binoculars for fear of loosing it in the mass of ducks.  At any moment they were likely to stop feeding and swim off shore like they do to work on crushing the sea urchins in their gizzards to make room for some more.

It looked surprisingly good in the camera being larger than the other eiders and the orange of that bill needed no imagination. Then it started preening. I fired rapidly hoping to get even the slightest angle on the under side of the throat and hopefully capturing the patented black 'V' branded under the chin of v-nigrum. I just finished praying for it to rear up and flap its wings when it did just that. The next 12 shots captured a prominent black 'V burned into the white throat.   Elation! As I looked at my booty on the back of the camera the whole flock did move offshore as predicted. But I had got what I wanted.   V-NIGRUM was NAILED

This was the third confirmed record of Pacific Eider for Newfoundland. BUT in the last three winters there has been a little wave of highly suspect Pacific Eiders accidentally photographed by people after King Eider shots among big flocks of Common Eider.  It is not the surprise it once was.  The Pacific Eider could be sneaking through the central Arctic more often for now as warmer summers create more open water passages from the Pacific to Atlantic.

Here are the photos. 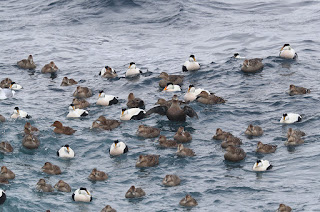 The very first photo. The look of a freshly peeled carrot stands out in a flock of Newfoundland winter eiders which are 99% borealis race with light yellow to rich yellow bills. 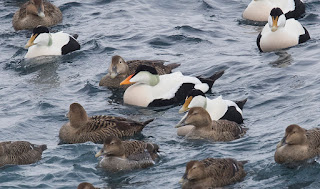 A cropped photo shows some of the patented marks of a v-nigrum. The green wash spreads under the black cap unlike borealis, but similar to dresseri from the Maritimes which were also in this flock of birds. 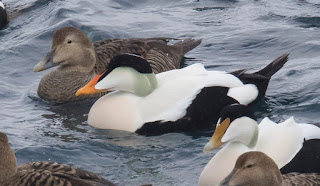 Depending somewhat on the posture of the bird the forehead bulges and creates and less horizontal edge to the black cap. Compare with the borealis 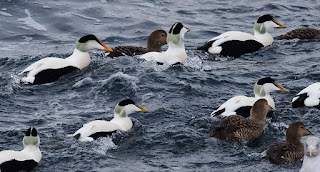 The v-nigrum is a big bird. The extra long sloping bill helps give this bird a more muscular feel. 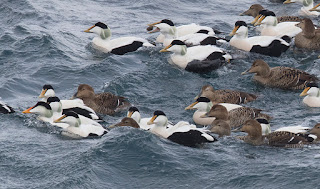 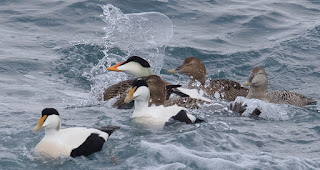 There is the patented black 'V' on the under side of the chin. It is near impossible to see this feature unless it does something like this bird is doing. Apparently some v-nigrum  lack this mark and some borealis  can have it. 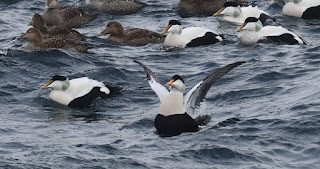 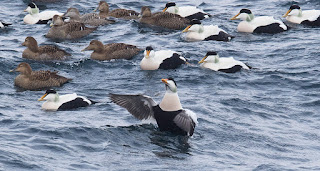 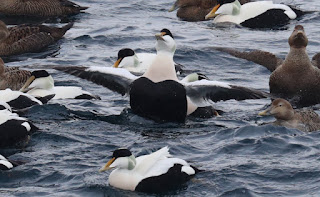 Here is a borealis  Common Eider showing the virgin white under side to the chin. 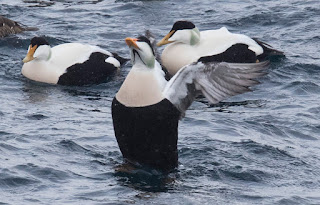 The v-nigrum  made no mistake it was going to be counted practically standing on the water to show off the 'V'. 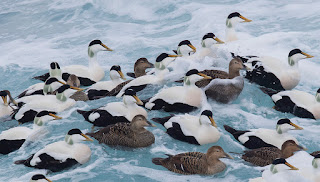 In a little while I hope to have another eider blog posting showing the variations in the borealis  Common Eider, males and females.