Point Pelee Visitation: 4-10 May - Part I, The Common Species

Point Pelee is one of the most famous birding locations in North America.  It is noted for its spring migration of warblers and other bright birds.  Sometimes large concentrations of migrants find a momentary refuge at Pelee before continuing their journey farther north.

I have been there maybe a dozen or 15 times over the decades. The allure of Pelee never goes away in a birder. The Pelee longing is always in the back of the birder's mind in May.  There is hardly a better place in Canada to spend a week during first half of May.  When brother Andrew who lives in Hamilton, Ontario with his new found interest in bird watching and bird photography wanted to plan a birding trip together at Pelee in May I was game.

I knew the birding would be nice. A bird starved Newfoundlander does not need much to make him happy. Even on the poor days at Pelee a Newfoundland birder like the Lammergeier can find subsistence in a worked over dry bone.  As it turned out Andrew and I lucked in an amazing bird packed week. There were two big events.  On 7 May there was big arrival of birds followed by an unprecedented northward diurnal movement of birds north and out of the park. As the birds moved north they concentrated in the narrow strip of trees between Lake Erie and the Pelee marsh. It was exhilarating to see the birds moving swiftly through the trees but frustrating being able to identify only a fraction of it.  When the movement died down the remaining birds settled to feed in the sheltered bushes along the beach. The calm air was swarming with flies. The shrubs were lavishly decorated with candy and the candy was all warblers.

On 9 May one of biggest reverse migrations of all time happened at the tip of Pt Pelee. Andrew and I parked ourselves in the woods a few tress back from the tip.  Birds were coming through at knee level and tree top level and everywhere in between. We kept an eye on the large tree above us that was constantly changing hands between departing and arriving flocks of orioles, tanagers and warblers.  It was more than anyone could keep up with. Two of us standing next to each other were usually looking at different birds but there was no use in trying to point out each others finds. The river of birds was flowing too fast. I figured that in the peak two hours in that tree above us we saw 150 Scarlet Tanagers, 200 Rose-breasted Grosbeaks and 500++ Baltimore Orioles and many many warblers. When we broke out of the trees to the path on the west side of the tip there were hundreds of people all looking up in awe.  But also down around their feet at pretty warbler gems.  Some of the warbler totals I made up for the 06:30 to 10:30 were 100+ Black-throated Blues, 200++ Black-throated Greens, 100+ Chestnut-sideds, 45 Bay-Breasted, 50 Blackburnians, 100+ Nashvilles... 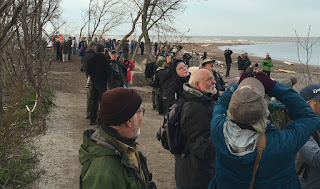 Birders at the tip of Pelee witnessing the spectacular reverse migration of 9 May 2019.

Everyday in between was good too. Lots of warblers were present everyday.  In the cool weather they were mostly feeding in the greenery on the forest floor and in undergrowth shrubs. There was a lot of insect life here especially compared to the canopy of the Carolinian forest which is late to leaf out.  Photography opportunities were through the roof all the time. It was so overwhelmingly good that I actually took relatively few pictures. You have to be there to experience the reasoning that I find hard to understand now that I am back here in bird impoverished Newfoundland again. The exceptions were the quality southern warblers like Kentucky and Prothonotary. Then things went the other way with  the camera taking 100s of snaps.

Here are some of pictures.  All birders should go to Pelee every May. But the park is brimming to the point of over flow in May so it is a good thing all birders do not go there. I want to again next year.....

Here are a sample of Pelee Pics. A second posting will follow with the "Southern" Warblers 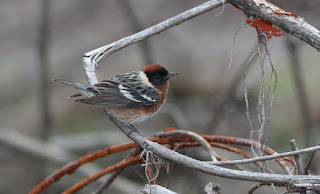 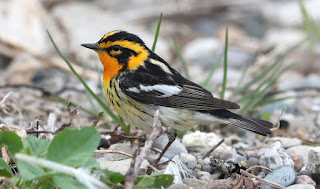 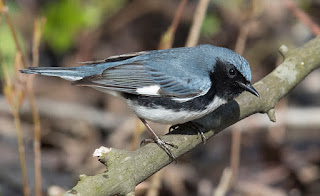 It was total saturation of male Black-throated Blue Warblers. Saw a few 100 over the trip with many point blank encounters. 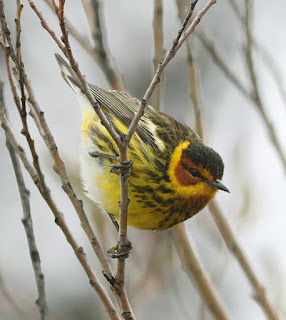 Good numbers of these beauts but fewer than Bay Breasts. 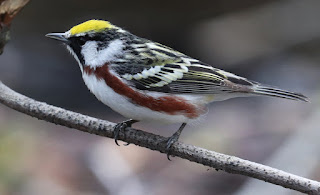 So common I almost forgot to take a picture of the Chestnut-sided Warbler. 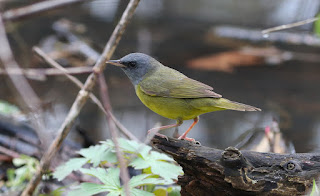 Mourning Warblers get more attention from Pelee watchers than it does in Newfoundland. 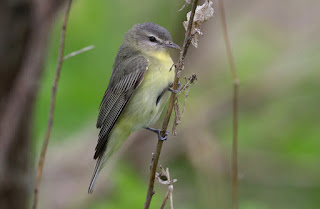 Philadelphia Vireos were pleasantly numerous with up to ten in one day. Its cousin the Warbling Vireo was much more common but it was one of the species I forgot to take a picture of. 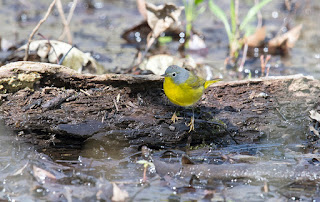 Nashville Warblers are one of the dirt common Pelee birds that Newfoundlanders enjoy. 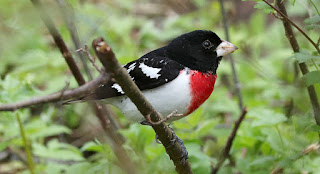 Rose-breasted Grosbeaks are very numerous and often do not mind posing for pictures. 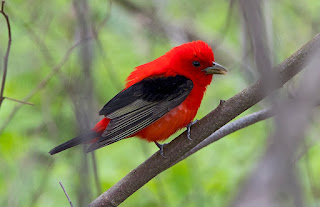 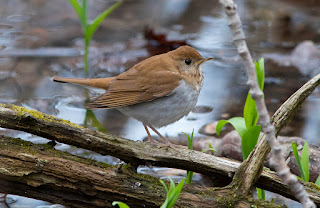 Veerys and the Wood Thrush (below) are among those birds Newfoundlanders enjoy far more than the Ontarian birders. 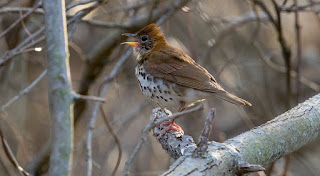 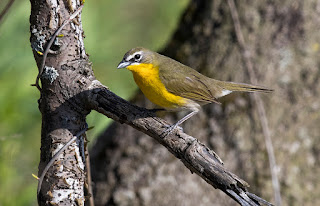 Yellow-breasted Chats look better in the shade. Here in the bright afternoon sun the deep mossy greens of the back and brilliant lemon yellows of the underparts are lost. 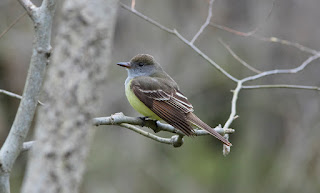 Great-crested Flycatchers are never abundant but suitably common in migration at Pelee. 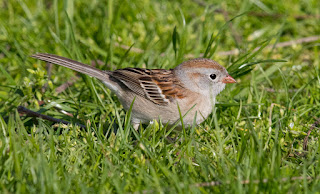 No one at Pelee enjoys a good look at a Field Sparrow more than a Newfoundland birder.

Posted by Bruce Mactavish at 18:20