It is not like skipping work for birds has never been done before.  Trying to space out my precious allotted holidays was an overnight decision. There were 2 Sabine's Gulls and three species of jaeger to see and photograph at Pt La Haye, St. Mary's Bay. We found the activity there late Saturday when time had run out for the day.  Went back on Sunday but torrential rains and fog made birding impossible. Monday was a work day and there was a forecast of fog. Tuesday's weather forecast hinted at a break in the fog though it was difficult to be sure from the wording of the forecast.  Overnight the possibility of no fog and a chance for some excellent seabirding won out. I was on the road by 05:30 for the 1 hr & 20 minute drive to Pt La Haye. The weather was near perfect with no fog, nearly no wind and high overcast. The birds were good but not as near perfect as I would have like.

There were jaegers to see with the scope from Pt. La Haye fa-aar out to sea. They were dillydallying about but identification could only be guessed at. On the beach there were a fair number of kittiwakes, terns and gulls.  The two Sabine's Gulls were present !  They were in the freshwater on the inside of the beach with the flock of bathing kittiwakes  The scope looks at the two different looking 1st summer birds were good.  They flew out to sea.  I followed one. It caught a capelin on the surface of the water. It had trouble choking the fish down. It flew back into the fresh water with the fish's tail still protruding from beak. This was my best photo opt but still very far.  Better than nothing. Just watching the bird was exciting. for July.

A duo of 1st summer jaegers started harassing the birds in the pond.  They were very aggressive and persistent in their harassment.  I was thinking Parasitic because of their aerobatic activities but photos later revealed they were both Long-tailed Jaegers.  Jaegers rarely read the Rules of Jaegerdom that we follow.    There was a 1st summer Laughing Gull among the beach gulls.

On to St. Vincents Beach. From the lookout at the west end of the beach the place looked vacant at first. Then half way along the beach I saw the mass of white Northern Gannets and dark Sooty Shearwater. They were right in next to the beach.  It took some time to reach the spot by car then walk along the loose gravel beach. By then the feeding swarm was somewhat dispersed but still good. The gannets would find out where the capelin were present along the beach and start a diving frenzy . The shearwaters would see the actions and swarm in to get their share of the booty.  There were many many thousands of shearwaters stretching from the beach off to the horizon. Only 5% were Great Shearwaters. No jaegers and no rare terns.

On to St. Shotts. The water was very active with shearwaters feeding right into the rocks. Thousands to look through. Nothing different as is usually the case. Spectacular all the same.

Trepassey. Nice flock of 38 Common and 2 Arctic Terns on Rare Tern Rock, but no Roseate.  Not many terns on the rocks at the nesting island.

The End.  Was it worth using up a valuable vacation day for? Yes.  It was good to get out there and check the places when there was no fog. Good to see the swarms of feeding shearwaters, great to see the two rare Sabine's but did poor on the photos. Jaeger action could have been closer as well.  It was a good 12 hours birding.  Infinitely better than 8 hours in an office. There are just two more days until the weekend for another dose of capelin birding action.  These are the good ole days of summer birding.

The Sabine's flying with a kittiwake of the same age. 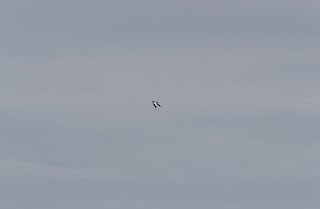 This is how far away the Sabine's was when it came back into land with a just caught capelin.  The two pictures below are blow ups of the bird flying back into land. Note the tail of a capelin protruding from mouth. 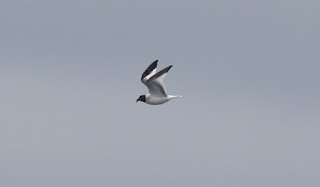 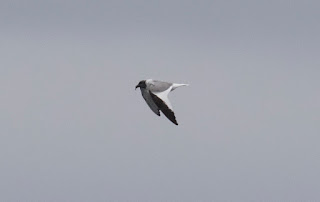 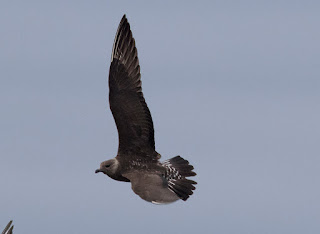 This 1st summer jaeger identified from the photos as a Long-tailed with outside help.  The strongly barred upper tail coverts, sharply spotted and barred underside of wing and body, over all cold brown colours, just two white primary shafts were among the reason making this a Long-tailed.  Feature easier to see in a photograph then in life! 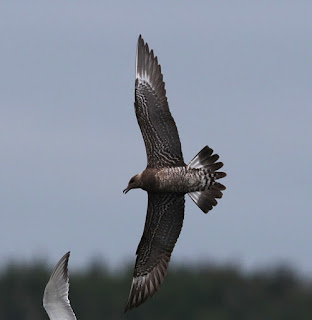 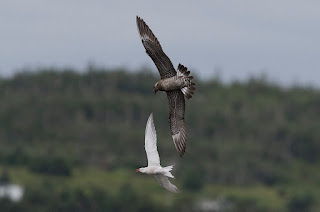 Northern Gannets get out of the water after a mass dive on a capelin school at St. Vincents beach..

Shearwaters flying just off the beach chasing the gannets diving on the capelin schools. 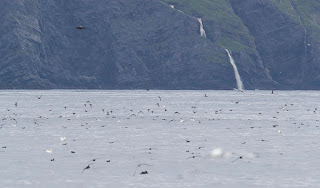 Some of the scenery we have to put up with at St. Vincents Beach when you can see that far with no fog. 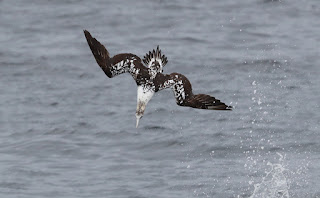 A second summer Northern Gannet makes the plunge for a capelin meal. 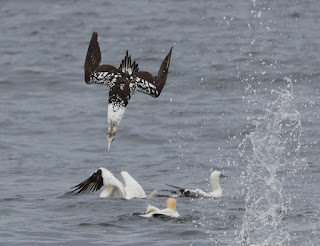 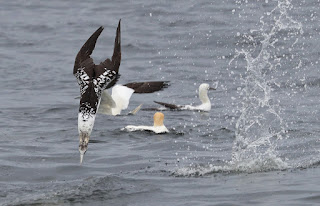 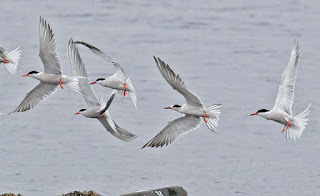 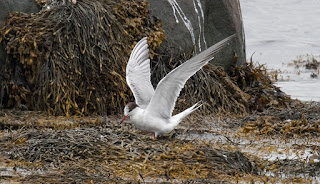 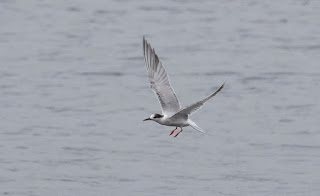 Posted by Bruce Mactavish at 10:25