Roseate Tern is somewhat of a legend in Newfoundland. It is a bird some of us are always on the outlook for when looking at the ubiquitous Common and Arctic Terns of summer around the coast.  It potentially could be breeding in Newfoundland undetected on the south coast or southwest coast of NF or even Burin Peninsula.  Small number nest on the Magdelan Islands, Quebec which is roughly the same latitude a southern Newfoundland. It used to nest and I believe is still occurring on Sable Island - the most eastern part of Nova Scotia.  It is easily overlooked for those not aware and looking.

The only records we have of Roseate Tern are:
1) Trepassey, Avalon Peninsula on 11 June 2006. Found by Mike Parmenter and seen by many and well photographed.
2) Renews, Avalon Peninsula 7 July 2008. Reported by Tom Hince and his tour group. There were no photos and no more details on identification other than a few obvious details typical for Roseate Tern including black bill.
3) Bear Cove near Cappahayden, Avalon Peninsula 9 July 2018 photographed by Dave Hawkins and John Williams.  It was not found the following day but what is believed to be the same individual was found by visiting Pennsylvania birder at Trepassey on 17 July because it had bands on both legs and a completely black bill like the Bear Cove bird 8 days earlier.

A small army of birders descended on Trepassey to look for the Roseate Tern. It was found after a frustrating time in the dense fog.  It was frequenting the tern colony in the inner part of Trepassey bay off Daniels Point. It was not among the nesting Arctic and Common Terns but resting on the bare rocks off to the side of the island with the other terns.  Fog and distance made viewing and photography challenging. But through the scopes everyone got their jollies. The scope views were pretty good.

It was a learning experience or at least a refresher course for all.  1) The shallow rapid wing beat. 2)The black outer three primaries contrasting sharply with rest of bird, unlike the black wash on upper wing of the Common Tern that starts appearing in middle of primaries and works its way to outer most. 3) The amazing whiteness of the bird made it always easy to pick out and follow among the Common and Arctics when there was a mass flush. 4) strong, square shoulders, long head of the Roseate recalling a miniature Sandwich Tern more than a Common or Arctic.  Didn't hear it call. Hope this encounter continues into the weekend and fog? is there any chance it won't be foggy down there??? Probably not until August. 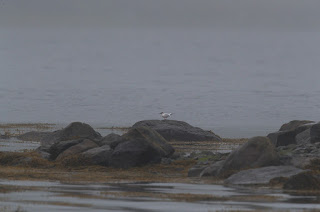 This how far away the bird was with a 840 mm lens. Uncropped photo, just resized. 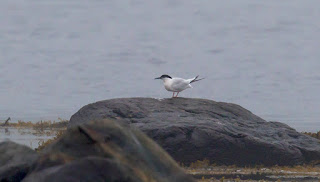 Same picture cropped and fixed to reduce cloudiness of fog.

Coming in for a landing showing off whiteness and on this individual three black primaries contrasting with rest of wing. The number of dark primaries varies on summer Roseate but it starts from the outers and works toward inners. 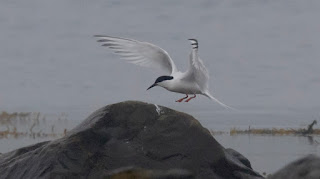 Massive crop. Bands couldn't be read.  A large percentage of nesting Roseate Terns are banded during annual studies at the core of their breeding range in coastal New York and Massachusetts and also at the small colonies in western Nova Scotia. 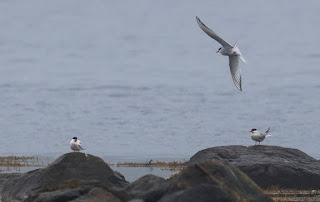 Three species of tern. Arctic in flight. The Roseate is the one with the whitest breast. 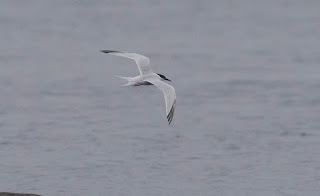 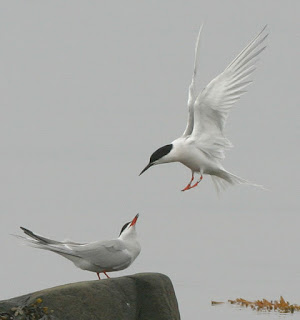 The 2006 11 June Roseate Tern at Trepassey. Note it was also banded but the numbers were not read.