The 18 March 2018 I had an opportunity to take many photos of a flock of 1500 Common Eiders feeding at Cape Spear, Newfoundland. Borealis is the common wintering subspecies of Common Eider wintering in Newfoundland. It was only in recent years that I realized borealis was on the rare side in Nova Scotia, New Brunswick and the New England States. The more southern subspecies dresseri makes up the eider populations in these parts. The segregation of these two populations over time has resulted in two recognizable forms.  Dresseri nests in the Gulf of St. Lawrence, Quebec, New Brunswick, Nova Scotia and Maine. Borealis is the Common Eider nesting in the eastern Arctic.  Common Eiders breeding along the coast of Labrador need more careful study. The break, and merging of features is thought to occur mid way along the length of the coast of Labrador. It is possible that Canadian Wildlife Service personal who have banded eiders on nesting islands along the coast of Labrador have insight on the zone of dresseri vs borealis. The reality is we do not really know.

On the Avalon Peninsula, Newfoundland large numbers of borealis over winter.  Up to 1% of the adult drakes can be identified as dresseri. There are others that seem to be in betweeners and may represent birds from the merging zone on the Labrador coast.

This blog posting is intended to show run of the mill borealis eiders, males and females plus some dresseri. 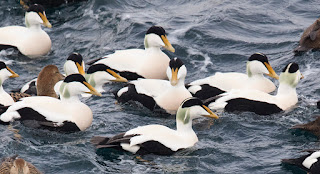 Borealis Common Eider drakes are relatively easy to differentiate from dresseri. As you look through these photos note 1) the nearly banana-yellow bill, 2) the short and pointed frontal lobe projections of the bill into the forehead 3) the complete lack of any green wash below the black cap. 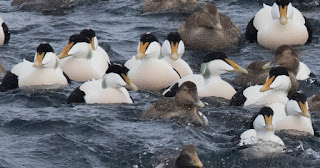 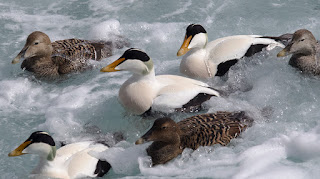 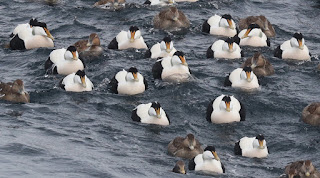 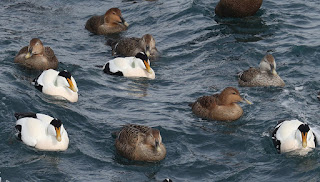 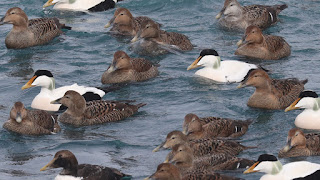 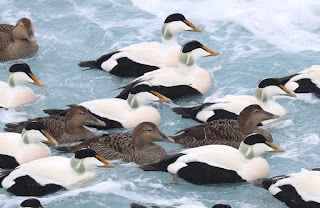 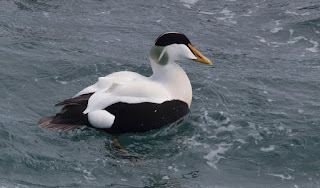 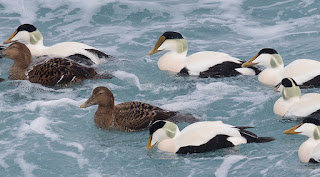 Classic dresseri stick out like sore thumbs among the borealis. There is a serious business going on in that 'nose'.  The frontal lobe broadens out to a rounded dull green intrusion far up into the forehead. Equally distinct for this subspecies when you look a little closer is the green wash along the bottom border of the black cap. Check with the borealis photos and see this area is always white with them. 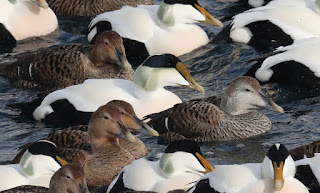 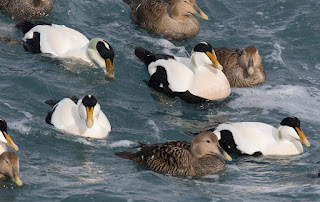 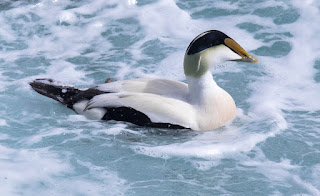 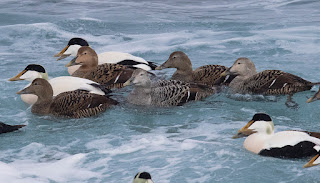 The separation of female Common Eiders down to subspecies levels is a new world.  All I know is that borealis come in a range of colours from ashy-gray (<2%) to a rich reddish-brown.  I am unaware of what use if any the shape of the frontal lobes of of females will be.  Photo sharing among those from the  Maritimes and Newfoundland could help smooth out the way to the answer . 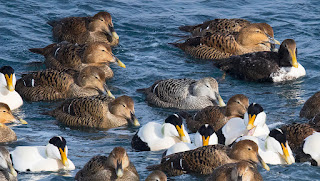 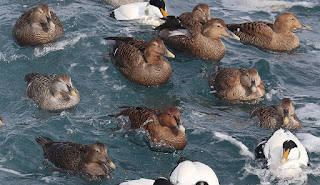 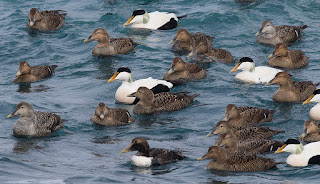 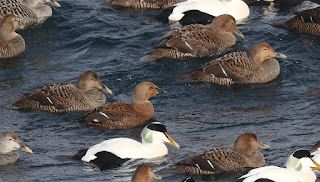 Note the gray bill and different head shape and the richness of plumage of the classy adult female King Eider in this picture.

Posted by Bruce Mactavish at 16:07