On 18 February 2016 Lancy Cheng found an adult Yellow-legged Gull at Quidi Vidi Lake St. John's.  This was a bit of a surprise since the gulls at the lake were being checked regularly and there had been no Yellow-legged Gull since the one present from late August to late November 2015.  Naturally the birders were out trying to see this bird and it was seen briefly on each following day including yesterday Sunday 21 Feb when it plopped down on the water to bath in front of about ten birders standing around chatting. This was a good chance for the cameras though the glare was a bit tricky and the bird was very actively bathing, almost continuously, before flying out on to the ice into obscurity among other loafing gulls to preen.

Attached are photos taken during the bathing on 21 February 2016 at Quidi Vidi Lake, St. John's, Newfoundland. 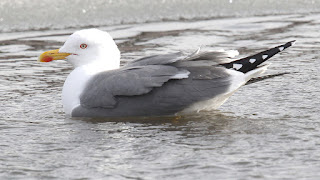 The bright and smart look to a Newfoundland Yellow-legged Gull impresses observers.  There is something about a satiny texture to the white head and a smartness to the unique shade of gray upper parts along with the brightly coloured bill that give the Newfoundland Yellow-legged Gull (thought to be of Azores Island origin) a smart-dressed-gull look in breeding plumage. 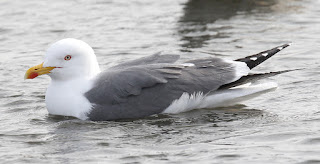 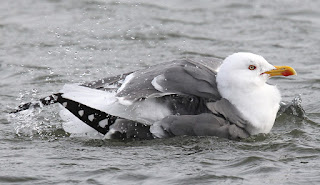 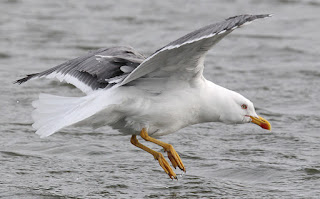 The legs including joints and soles of the feet are deep yellow. 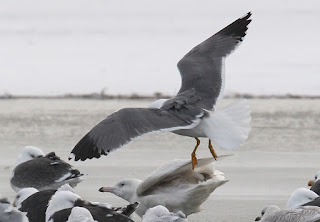 The full hand of the black wing tip is revealed as it lands on the ice. 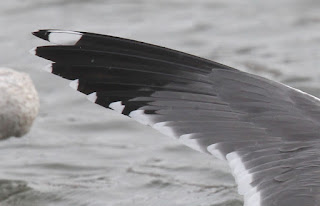 The dark mark on outer web of P4 found on75% of Azorean YLGUs. There is a dark almost continuous line on leading edge of mirror on P10.

It is difficult to put a finger on all the differences between LBBG and Azorean YLGU but it is not usually a debate when you see them in the field especially in breeding plumage or after finished moulting primaries in November. The upper parts colour is a little paler shade of gray than the pale end graesllsii.  One feature difficult to explain but is significant in the field is the facial expression of the bird.  LBBGs have a meek and mild look and the YLGUs have a slightly meaner, colder expression yet while not being significantly larger.  The YLGU seems to have a relatively shorter thicker bill with a more sudden steeply curving culmen.  The red gony spot is large and bright red often washing over in to the adjacent parts of the upper mandible. The YLGU may also have a stronger gap mark running back from the bill.  There is something about the placement of the eye on head, It appears more forward perhaps an impression given by the steeper forehead YLGU (most obvious when in relaxed mode).

I will not go into all the differences in LBBG vs YLGU but below are comparisons shots trying to show head details.The first two photos are an adult LBBG in full breeding plumage taken on 31 May 2009 in St. John's.  Then two head shots of the YLGU. 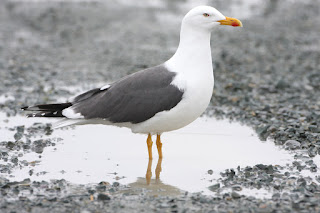 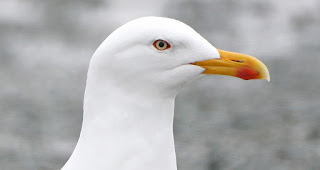 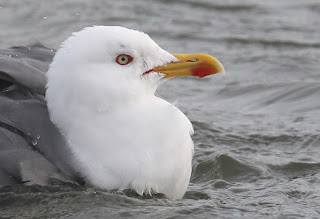 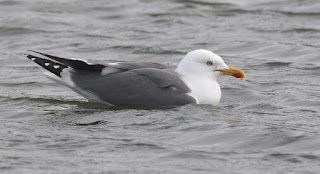