Trace Stagg noticed a different bird out the window of her house in Lumsden while she was talking on the phone. She knew it was different and managed to get a photo of it without losing phone contact. It was a FIELDFARE.  News hit the street by 2:30 pm Saturday.

Ken Knowles, John Wells and I were on the road an hour later. We knew there was not enough time to get there before dark but we could guarantee an early assault on Lumsden driving 75% of the distance (4 hours). We stayed at a great cabin outfit in Gambo called Freshwater Inn.

After a Five Star breakfast, one star for each strip of bacon nestled under the eggs, hash browns, thick slices of homemade bread, orange juice and a jug of coffee specially made up for us at 6 am since we were the only guests, we drove north. Arrived on site at Forest Road in Lumsden at 07:45. It was a perfect morning being clear, calm and cool (-14C). A coating of freezing rain on the trees from the previous storm sparkled in the dawn light.  The place was alive with birds. Felt like a fallout of birds at Pt Pelee, ON  or High Island, TX  except it was mainly Pine Grosbeaks.  There were also a few hundred Bohemians and a couple dozen Cedar Waxwings and all the finches on the NF list except for Evening Grosbeak and Hoary Redpoll. Robins were present by the dozen but no more.

There were fewer than 50 robins.  It took 40 minutes (only) to locate the FIELDFARE for two people, and a further painful 30 minutes for the last person (moi) to see it. We spent the next three hours following the Fieldfare around Lumsden but generally around Forest Road area. We found and lost the bird at least 15 times. We never had a long leisurely view. It was incredibly wary. The call was key in keeping track of the bird. We often knew it was near when we couldn't see it.  It was great to see the bird. The first in more than 20 years for the three of us who have logged a combined total of 120 years of Newfoundland birding!!

While similar to a robin in actions it is its own bird. The long wings and tail and long neck give the bird a different look. It is bigger than a robin by ?10%. ?15%.  It flies with a more languid sure flight. It looks like a long distant traveler capable of crossing that Atlantic Ocean.

Attached are some greatly cropped shots of the bird. It was the real thing! 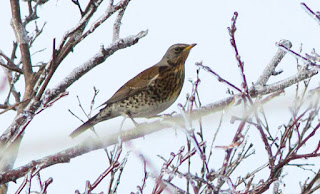 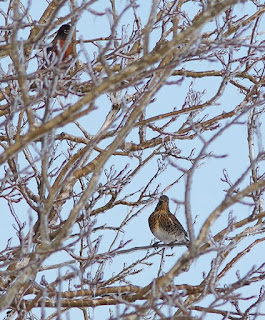 The Fieldfare was never harassed by the robins for hanging out with them despite being different.  It was too big to bully. 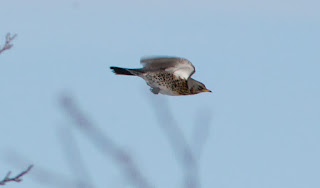 The satin white under wings were the best way to follow the bird when in flight among robins and pine grosbeaks. 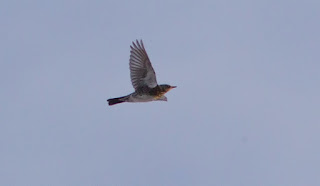 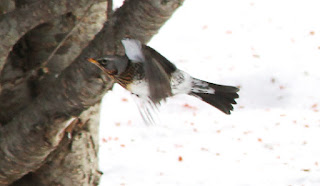 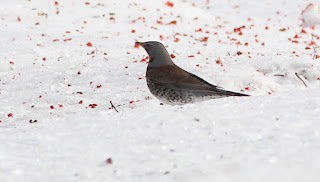 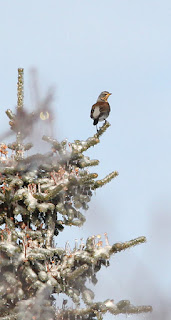 The pale gray rump contrasted with black tail and reddish back in flight. the head was darker gray than rump. 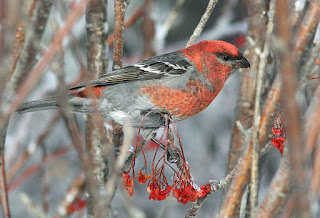 If only the Fieldfare was a tame as the endless Pine Grosbeaks.