The November 28 & 29 weekend is still prime November Warblering in St John's if there has been no periods of cold weather. But a cold front to pass over St. John's with rain just after dawn on Saturday was a threat to warblering.  I was expecting it was going to be a gull watching Saturday morning but thought I'd take a chance before it rained and walked five minutes down Waterford Bridge road to the graveyard and try to see the Blue-headed Vireo found by John Williams and Dave Hawkins early in the week and seen at least once afterward. I'd seen only one later Blue-headed Vireo in Newfoundland.


Blue-headed Vireo was the first bird I saw and one of the few birds present. Nice views of this attractive species. It seemed to be getting insect life to eat. An Orange-crowned Warbler joined it in a rhododendron bush.  The dark sky was threatening but thought maybe I could get in a quick pish at St. Mary's school.  Got lucky with a Northern Parula at the top of the hill. A scarce bird at anytime in eastern Newfoundland there have been only a handful of November sightings. Went to check out the make shift feeder that someone has put up near the old folks home. Suddenly I was looking a THREE Orange-crowned Warblers in one little green bush growing out of a chain link fence. Then a/the Parula flew in and joined them. Then to the right there was a late Ruby-crowned Kinglet and a Black-and-white Warbler.  Things were happening so fast I had to be careful not miss anything. No pishing required. There were lots of chickadees, juncos and goldfinches present as well.   I tried to follow the nucleus of the flock. Warblers petered out. The rain started. I had to be satisfied with that even though the stink of mega was thick in the air. 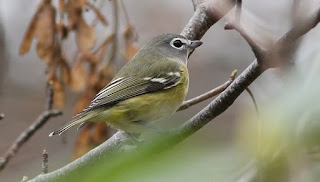 The Blue-headed Vireo in the Waterford Bridge Rd graveyard. 28 Nov 2015 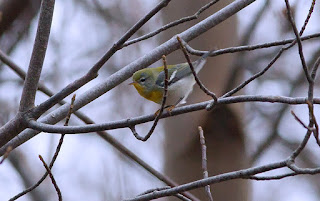 The flashy and flighty little Northern Parula at the top of the trail by St. Mary's School. 28 Nov 2015 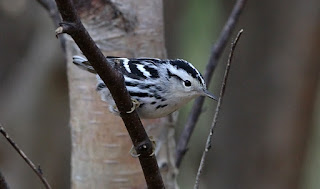 One of the most routine warblers during November in St. John's but just try to find one outside the tall Norway maples of the city anywhere else on the Avalon in November. It never happens. 28 Nov 2015

The rest of Saturday was rained out. Went to bed that night planning a full on assault of the Waterford Valley for Sunday. Sometime in the middle of the night there was a change.  Began thinking about the non-warbler megas that could be lurking down the Southern Shore not being seen. Flycatchers, sparrows etc. I ran with that instead. Got to Cape Broyle at dawn on Sunday.  It was eerily dark and very very still. For the first couple or three hours it was magical getting the birds out. They wanted to see you. So many sparrows, juncos by the swarm, Golden-crowned Kinglets were vermin. You could cut the rarity stink with a knife. Finally a sign. Two bright Baltimore orioles with a large junco flock behind the church in Calvert.  And then the most intense yellow ever on a yellow-breasted chat in the wet alders appeared. The beautiful mossy green back and the snow white spectacles framing the surprised bright black eyes. No chat ever looked better but it it a relatively 'common' rarity. 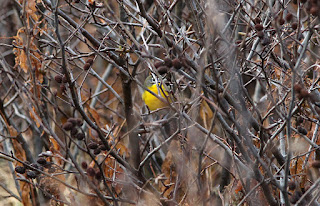 This photo does no justice to the views through binoculars of this Yellow-breasted Chat at Calvert.  29 Nov 2015


By 11 am the sun started breaking through the clouds as the air cooled off even more. The magic feeling for finding birds was over. The birds were still there but harder to dig out. Never did find the mega I was hoping for. A  Grasshopper Sparrow near the end of the day at Cappahayden was at least the first one of the year in the province. The only other warbler was an Orange-crowned Warbler. Meanwhile I had been in texting contact with John Wells who found three new warblers in east St. John's a Yellow-throated, Prairie and Wilson's.  It made me wonder what I would have found if I'd spent the day in the Waterford Valley. I was still happy to have put in the effort down the Southern Shore where for certain there are some extremely rare birds just waiting to be found. Oh why are there five long days between weekends! 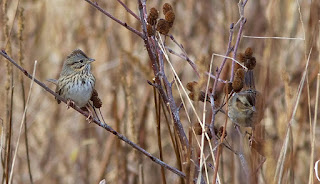 It was a big day for finding sparrows with late November high  totals of three Lincoln's and eight Swamp Sparrows. This Lincoln's Sparrow at Cappahayden was watchful of the three bullying Swamp Sparrows it was associating with. 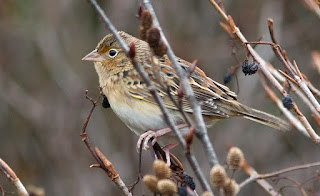 Bird of the day was this Grasshopper Sparrow on Murphys Lane.  Sometimes it pays to be lazy and pish from the car. I doubt this shy bird would have exposed itself if it could have seen all of me. As it was it present only briefly. 29 Nov 2015 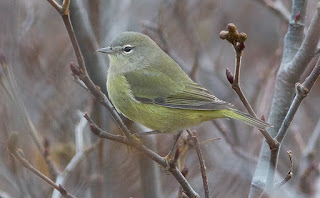 Only my second warbler of the day but the 5th Orange-crowned Warbler of the weekend.  It ended a pretty good weekend of birding. 29 Nov 2015 at Renews.