Let's see if I can remember the list Townsend's and Pine were both new for the province that day. The other bird in that yard was a Prairie Warbler only the 2nd provincial record. A Hooded Warbler seen but found the week before was a provincial first. There were multiple Wilson's and Cape May Warblers. There were some Black-and-whites, one Common Yellowthroat,  a Yellow or two, Yellow-rumped, 2 Yellow-throateds, probably Palm, Nashville I think, and certainly Orange-crowned.

Thus began a the phenomena of November Warblering in St. John's. That was over three decades ago. There have have been changes over those three decades.  There seems to be fewer individual November warblers.  Even when allowing for the less pointed effort by November Warblering Booldhounds there definitely seems to be fewer individual warblers happening in November. Part of this could be fewer vagrant warblers to start with. Maybe smaller numbers of warblers during fall migration overall. Maybe fewer of those mysterious November aphids on the abundant Norway maples of St. John's that might entice warblers to linger in the city.

Modern day birders hardly know the reasoning behind pounding the sidewalks and listening for Black-capped Chickadees between the houses. It isn't fun birding as you know people are in the houses staring out at you on the sidewalk with a finger ready to dial 911. But the rewards can be huge as the die-hards know striving to drive another shot of warbler-rarity into their veins.  But those die-hards are now getting old and losing momentum. Most of the people present at the 1983 Warbler Tree are now sitting on the birding shelf collecting dust or have fallen off the shelf. The newer birders never really understood what it was all about.  The act of November Warblering in St. John's is but a lost art.

Two of the twisted nails from the 1983 Warbler Tree were out warblering today.  John Wells (The  1983 Warbler Tree discoverer) and moi among the first on the scene in 1983, were out on this exceptionally beautiful sunny November day.  JW found a Pine Warbler and Wilson's Warbler around Long Pond. He birded all the way down the Rennies River and Kelly's Brook without another warbler score.  Yours truly spent four hours in the Waterford Valley in the morning. The only warbler was a Pine Warbler just outside the chain link fence bordering the vast yard containing the 1983 Warbler Tree. I think I could recognize the tops of the famous tree.  Later in the afternoon I added a nice looking Nashville Warbler and an Orange-crowned Warbler to the list in the Waterford Valley graveyard..

You know things are different when the bog standard Black-and-white Warbler which was the bog standard boring warbler to find at all the best warbler hunting areas are now getting hard to find.  It was some sort of relief today that five warblers of four species were found but I fear the bottom has fallen out of the effort.  The passion of November Warblering in St. John's is all but dust the wind.

A dull immature Pine Warbler behind St. Mary's School on Waterford Bridge Road. It was about 5 seconds flight from the famous Warbler Tree of 1983 where the first Pine Warbler for Newfoundland was found by John Wells in 1983. We've learned so much since then.  Pine Warbler is now found annually. 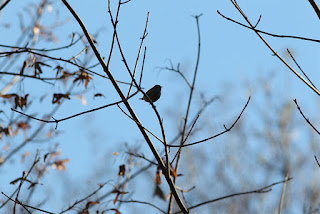 It is always exciting to pish in a warbler with the chickadees and juncos in November for the odds of it being a true mega rarity are high.  There is always a little disappointment when you identify it as a relatively regular November warbler such as this Orange-crowned even though it is an interesting looking bird 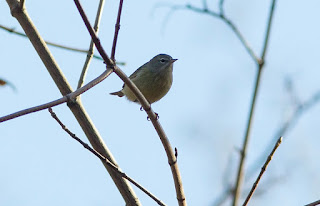 Looks are often quick with photo confirmation never a guarantee.  Thanks to modern day capabilities of digital photography the picture above can be turned into the picture below. 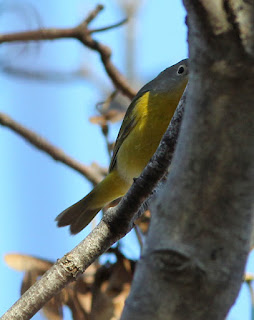 A Nashville Warbler is a medium quality November Warbler because it is a fairly rare breeding species with no stake out locations to find it at any season.  It is one of the more regular November Warblers in St. John's. 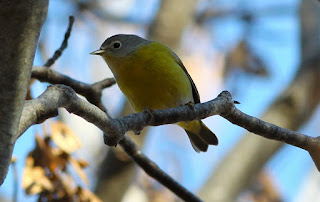 An enlarged crop of the bird on the same branch as below. 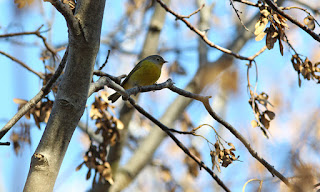 Nashville Warbler is an OK warbler to see in November but there are bigger rewards out there RIGHT NOW !!!!!