Mid Nov Meandering in the Rain

Sunday 15 Nov 2015 was wet and cold but not to waste free time I went car birding around the bay - Conception Bay and Trinity Bay. A few photos happened along the way, nearly all from shelter of car. 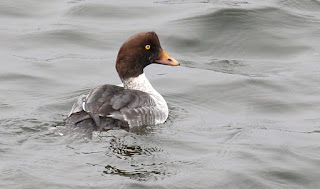 What! A female Barrow's Goldeneye so close? Not so quick. The bill is yellow and the forehead steep. But things are not right. The bill is too big and the wrong shape, It lacks the shaggy crest look. Below you can see the bird in more relaxed mode with a typical rounded head of a Common Goldeneye. The bird with it also had a brownish bill unlike the gray bills with yellow tips in winter plumage. Need some research but I wondering if these are first year males. They have rather white necks and breasts. Beware of the yellow bill, go for bill and head shape.  photos from Bay Roberts. 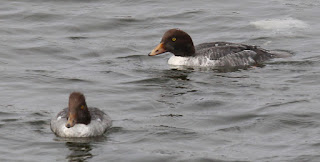 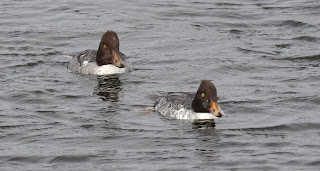 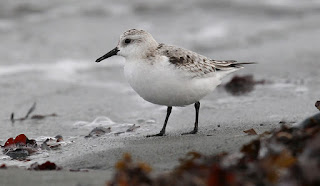 A Sanderling on the beach beside the road at high tide in Spaniard's Bay.

The three hybrid American Wigeon x Mallards are back at Harbour Grace for the 4th? 5th? winter. This is a long distance crop of two of them.  No real need of it since they are tame and will come for bread but I had no bread and it was too wet to get out of the car. You can barely see the yellow leg of the bird on the right. 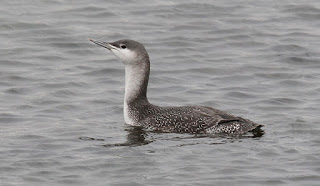 During a 20 minute break in the rain at Bellevue Beach I got out of the car to get as close as I could to some gulls across a channel and surprised a Red-throated Loon resting in a quiet cove out of the northerly gale.  I was partially conceal behind a rose bush while the loon checked me out with its head held up high to sniff the air. 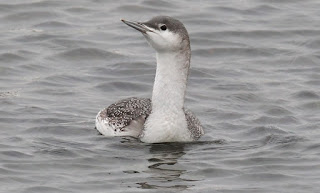 ----------------------------------------------
The targeted highlight of the trip was the 1st winter LITTLE GULL at Bellevue Beach.  Ed Hayden had found it here on 11 Nov.  Little Gull is rare enough in Newfoundland with an average of less than one per year and nearly all them being 1st summer rat heaps June to Aug. A fresh fall 1st winter Little Gull was treat.  I was not going to be able to walk out the beach so was relying on picking it out with the scope across the channel from the town site.  I had misjudged the tides as per usual for Bellevue. While the mud flats were never exposed while I was there, a tide rip developed in the channel and the small gulls were feeding on small fish (sand lance). This included the Little Gull, 10 Bonaparte's and 5 Black-headed Gulls.  Of course they hugged the far shoreline but I got as close as I could by the graveyard and had some nice scope views and managed some record shots in the failing late afternoon light between rain storms. 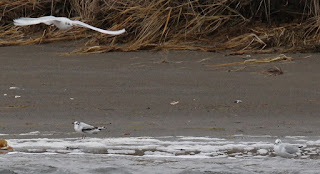 Little  and Bonaparte's on the the beach with a Black-headed Gull over head. 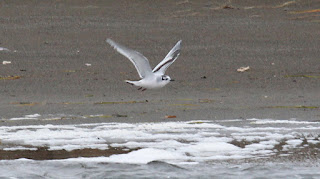 The black pattern on upper wing is similar to kittiwake. 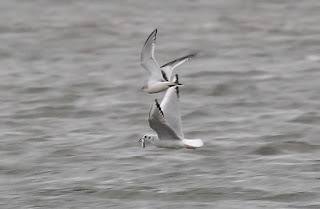 The Little Gull was feisty and often participated in chasing gulls that had caught a sand lance. Here harassing a Bonaparte's.

Posted by Bruce Mactavish at 23:04