Yesterday (5 Jan 2015) Alvan Buckley posted photos of a hybrid aythya at Burtons Pond, St. John's,  Upon seeing the photos I realized I had seen this bird a couple of times since Xmas but assumed it was a drake Ring-necked Duck on the way to reaching breeding plumage. When you stop to take a second look and see the faint vermiculation in the back then it suddenly becomes obvious this is not your ordinary solid Ring-necked Duck. Now the funny head shape and very faint pale spur on the side add up to a hybrid and not a temporary look due to the state of moult. Alvan's conclusion that this was a hybrid Ring-necked Duck x Scaup make perfect sense.

This morning by chance I stopped at Quidi Vidi Lake on the way to work. There were some 75 aythya present in the constricted open water.  Exactly fifty of those were Tufted Ducks. Not sure when I noticed the Alvan hybrid but when I did I knew it was the same bird he'd seen at Burton's Pond 3 km away. I immediately started taking pictures with the 300 f4 lens with 1.4x converter but was wishing I had my 600 mm with me.

Conditions were harsh with west winds gusting to 90 k/hr and -7 C temp. No doubt this bird will be with us for the entire winter and there will be endless opportunities for microscopic views & photos. Below are photos taken during the excitement of getting to know this bird. 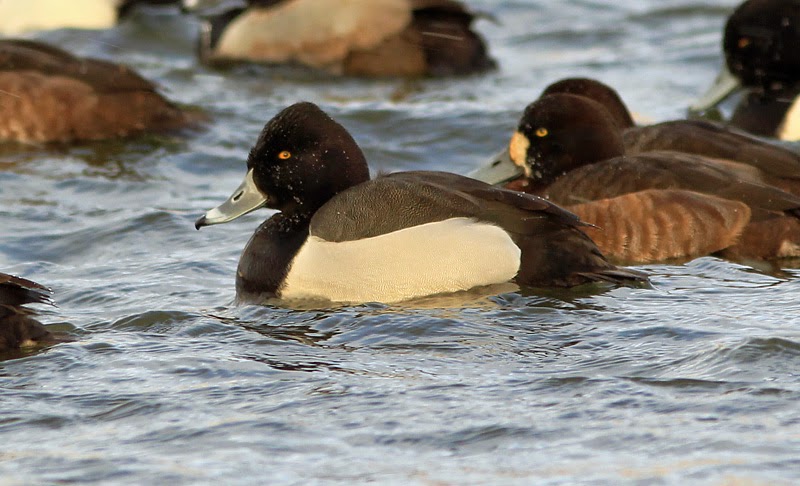 When served up on a silver platter this hybrid Ring-necked Duck x Scaup appears rather obvious. 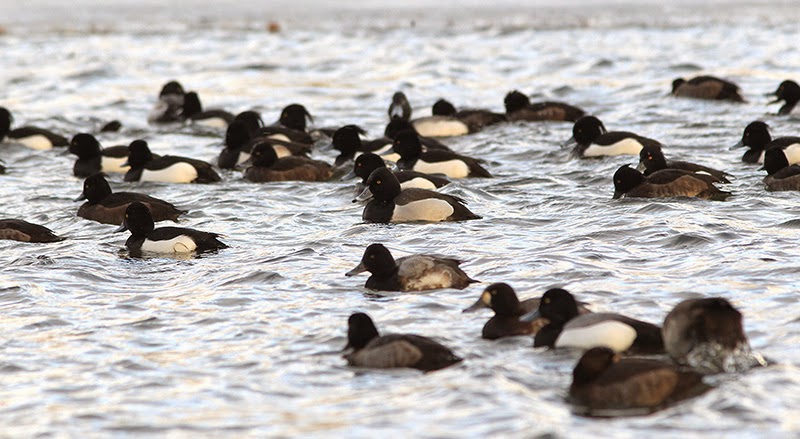 But when merged with a mixed flock of Tufted Ducks, Ring-necked Ducks and Greater & Lesser Scaups in various states of moult all within a week or two of reaching full breeding plumage, it can easily be overlooked. I know you can pick out the hybrid duck. It is in the middle of the frame. 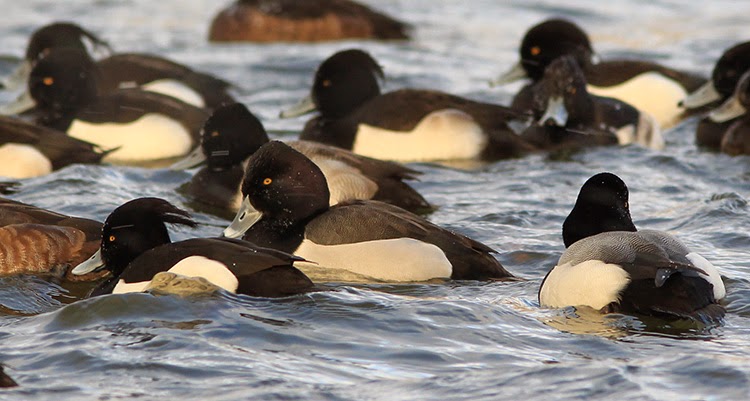 Here the hybrid duck is between a drake Tufted on the left and a drake Greater Scaup on the right. You can see how the blend of the solid black back of a RNDU and the vermiculated back of a Scaup back might look. 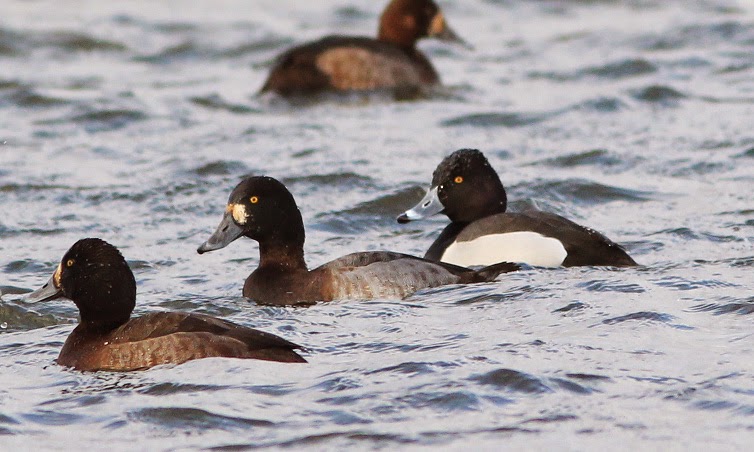 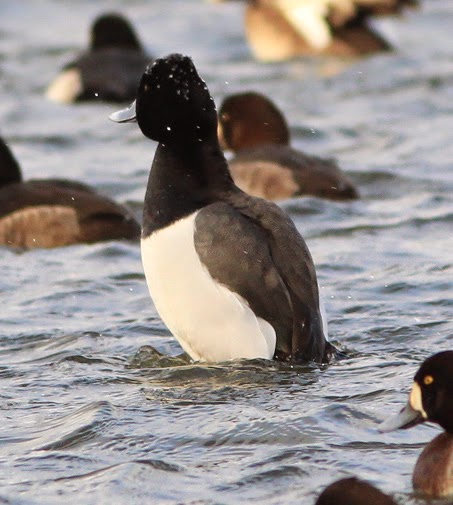 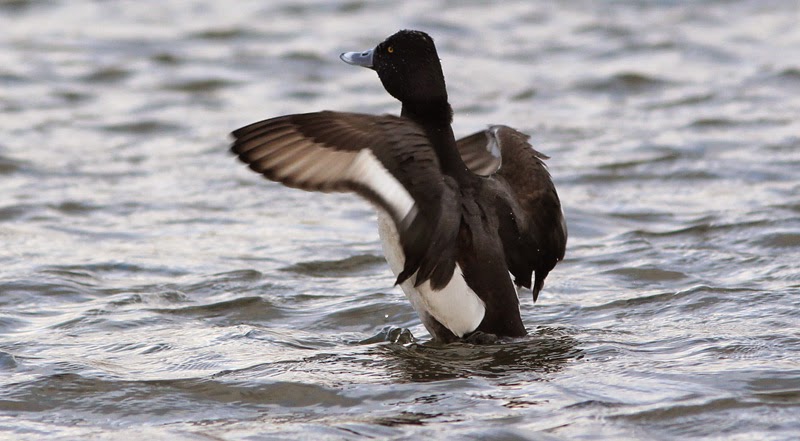 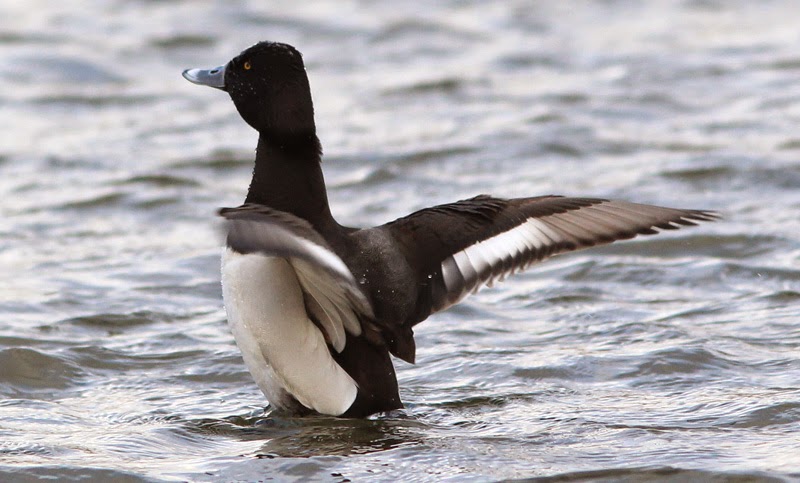 The bright white wing stripe stopping abruptly where the secondaries end and the primaries begin is a signature of the Lesser Scaup.  Odds are strongly in favour of this being a Ring-necked Duck x Lesser Scaup hybrid. 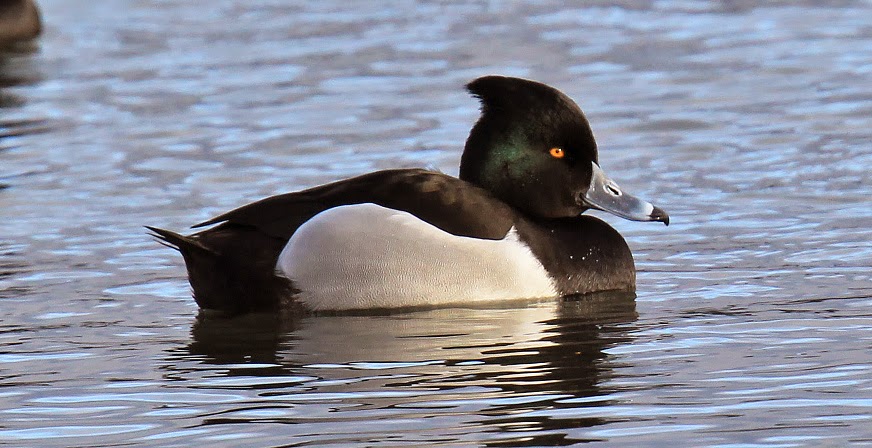 Another hybrid aythya.  This is a Tufted X Ring-necked Duck.  It has been present each winter at Clarenville, Newfoundland every winter for at least five years.  This picture was taken during Xmas holidays 2014.