The set up for a storm-petrel event at Holyrood on 26 June was good.  Poor vis in rain, drizzle and fog with moderate NE winds overnight.  Such winds usually blow Leach's Storm-Petrels into the bottom of Conception Bay, Avalon Peninsula, Newfoundland. They are easily swayed by wind direction when they can't see where they are going in the fog.  Holyrood is the cul de sac of Conception Bay. At the mouth of Conception Bay is the largest nesting colony of Leach's Storm-Petrels in the world with about 2 million nesting pairs.

I arrived at Holyrood about 7 am 26 June  The wind was too light and there was too much east in that NE wind. Holyrood harbour was almost calm being sheltered by the hills. There were no storm-petrels in the inner part of the cove but plenty (few hundreds) in the outer part of the bay. After an hour the wind started picking up and turned more proper NE but still relatively light at 30-40 km/hr but it was enough to get some storm-petrels to come right into the harbour and feeding off the beach. The birds were not at all stressed by the weather but were feeding heavily.  As often happens small critters on and near the surface of the water also get bottled up in the Holyrood cul de sac.  The Leach's seemed to be finding plenty to eat.  A concentration of 150 or were feeding by a breakwater at the marina. It was now raining but the birds were TOO CLOSE not to try for photos. I wrapped the camera and lens in water proofs and stood there at point blank range snapping away madly in the rain. As always the conditions are the worst for light and wetness when seabird events happen in Holyrood. Miraculously for 30 minutes the overcast sky turned from blackish gray to whitish gray and the rain more less stopped.  It was the second most amazing photo opt for Leach's storm-petrels I had experienced. The other being at exactly the same breakwater in early August more than five years ago.

Then a wave of increased winds and heavy precipitation and poor visibility drove me back into the car. 45 minutes later when it lessened I saw Holyrood  harbour was now FULL of Leach's Storm-Petrels. And a  Manx Shearwater even.  I had to leave then because I was already 3 hours late for work.

The weather continued miserable all afternoon with winds not that strong 40-50 km/hr but constant rain drizzle and fog. Dave Brown visited Holyrood noon to 2 pm and figured 5000 storm-petrels in the harbour and bay. I was back in Holyrood at 5:30 pm. It was an incredible scene. The cove was full and the bay was full as far as could be seen 300-400 m from various vantage ponits.  It was impossible to estimate numbers but it was in the tens of thousands.  While most of the birds were feeding they were also getting blown around a bit and some were going inland. Probably many never came back out once they lost sight of the water in the heavy drizzle and fog. Surprisingly only two dead ones on the road. The weather was too inclement for picture taking.

Next morning I was there at 05:20.  The storm had ended sometime after midnight. I was expecting to see many dead ones on the road and especially under the wires that run along the road paralleling the beach.  It was a miracle. The scene had completely changed.  It was completely over. The storm-petrels were completely gone! I found only six dead storm-petrels. There have been much worse causality totals during Sept/Oct storm. 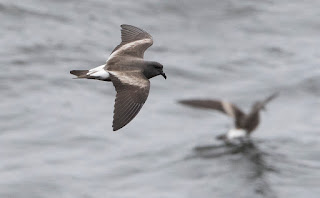 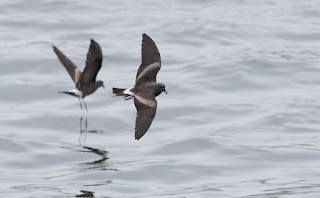 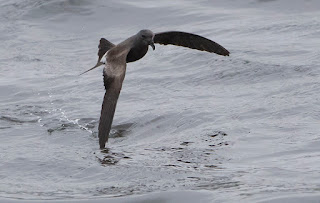 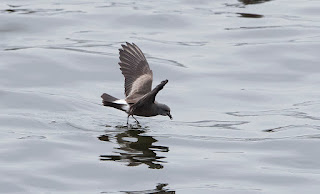 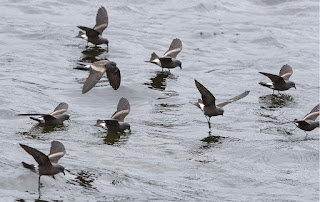 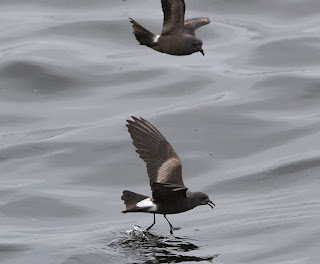 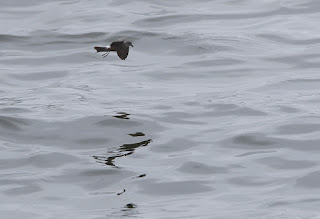 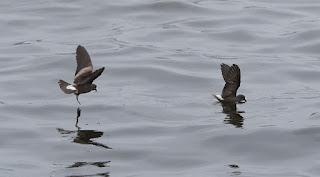 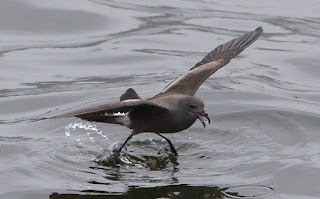 The tiny piece of gelatinous zooplankton in this bill seemed to be the main food item. Even gulls were swimming in the water picking at these nearly invisible food items. 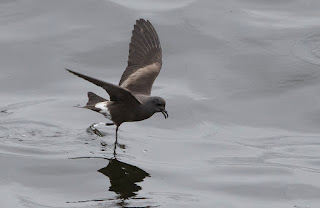 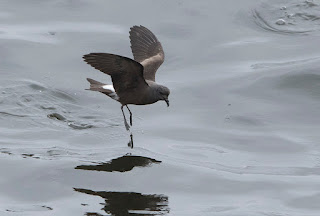 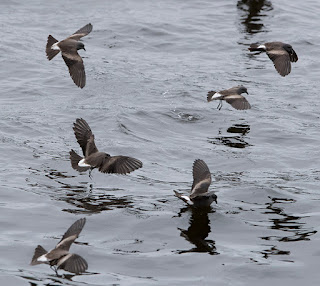 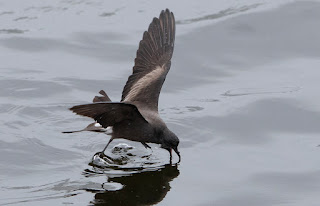 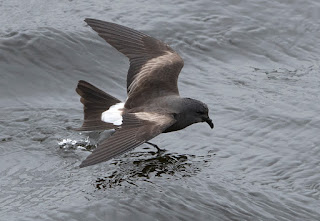 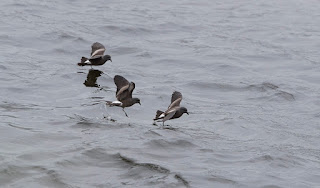 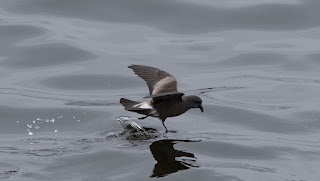 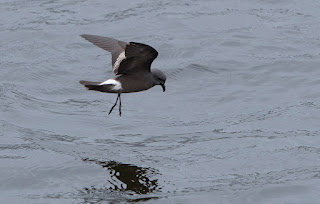 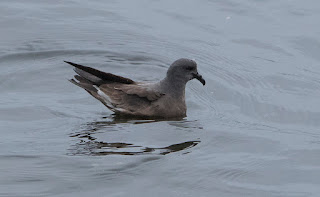 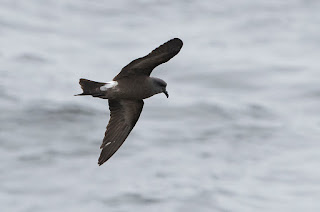 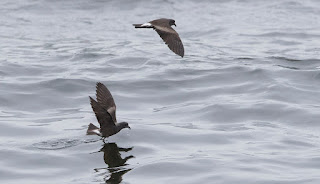 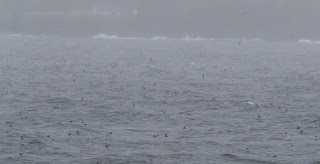 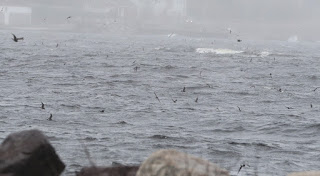 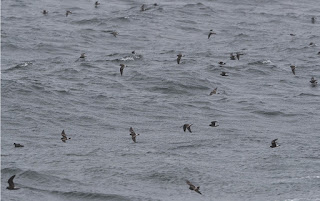 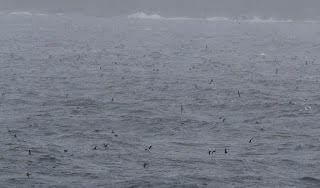 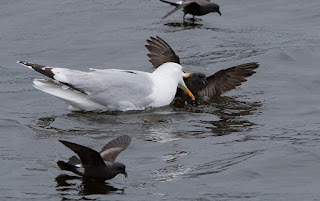 Herring and Great Black-backed Gulls were catching some Leach's Storm-Petrels but it wasn't the  massacre that it could have been,  The gulls were only mildly interested in catching them. They were easy enough to catch if they wanted to. The Storm-Petrels hardly recognized the gulls as a danger but would flick out of the way at the last microsecond when a gull would make a pass.  The storm-petrels showed no reaction to their brothers being killed by gulls next to them. 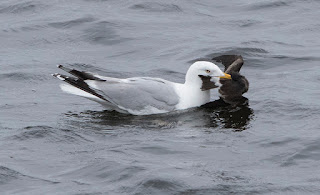 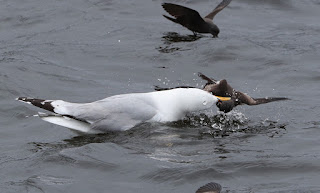 The bird above actually made an escape (see below) after being mouthed by the Herring Gull for about 45 seconds. 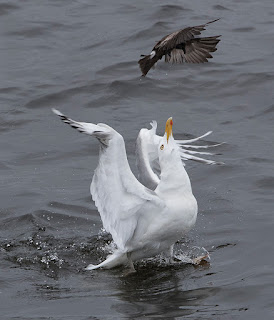 The Morning After. There was almost no hint of the 10s of thousands of  Leach's Storm-Petrels trapped in Holyrood just 10 hours earlier.

Posted by Bruce Mactavish at 18:33