About February birders in St. John's start asking around who is going to the Codroy this spring.  It is a spring heaven at the end of a long winter and painful spring.  Birds regular include some of those species who's nesting range sort of stops at Cape Breton Island, Nova Scotia.  A few individuals of some of these as we call them "Nova Scotia birds" are trying to make inroads into the Newfoundland breeding market. There is so much real estate available. Maybe too much for two rare warblers of opposite sex to hook up. Bottom line is that a nice selection of NS type birds are easier in the Codroy Valley at the SW tip of Newfoundland than elsewhere in the province.

The very end of spring migration and the start of breeding season is considered best bang-for-your-buck season.  This means early June.  Besides all the birds the place is beautiful.  The lush Codroy Valley with a backdrop of the Long Range Mountains is scenery you can't buy.

Birders gravitate to the Codroy Cottage Country Cabins. These are not the only cabins to stay at in the valley but they are more or less perfect for birders. Claudelle, the owner is turning into a birder and photographer and is very birder friendly to say the least.

SPRING 2018 was one for the record books. It was a spring where legends and stories germinate. It was a combination of big surge of warm weather and migrants in NB and NS and a sudden and prolonged cold front.  A really cold front. I arrived on the evening of 2 June as the cold front hit hard. On 3rd June the temperature never rose about +3C. And it didn't get much warmer for the next four days. Yellow-bellied Flycatchers and Swainson's Thrush were everywhere !!! We were seeing 100-200+ of each every day on the ground. Warblers were hopping on the ground. Desperation City.  In the first four days I saw several hundred of both YBFL and SWTH before I heard one sing. They were in survival mode.  YBFL were being hit by cars since they were so low to the ground and frequently flew low across roads. It was even colder in the rest of Newfoundland.  How can we tell what effects this extra cold first two weeks of June 2018 had on breeding birds of Newfoundland?

The birding and birder atmosphere was still good. We enjoyed the birds  The following are some pictures from my time in the Codroy Valley 2-8 June. 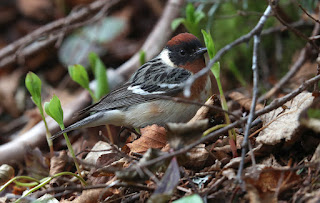 Bay-breasted Warbler is one of those warblers not widespread in Newfoundland but does have a secure foothold as a breeder in the southwestern chunk of Newfoundland.  I watched this one for an embarrassingly long time - 2+ hours - feeding on the ground at Cheeseman Prov Park. A stonking encounter with one of the most amazingly coloured warblers. 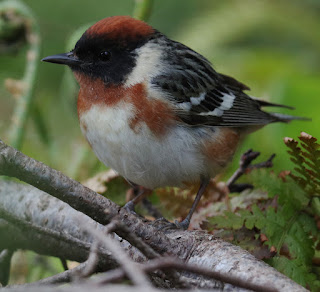 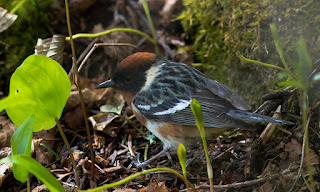 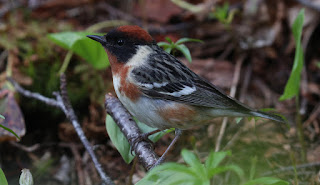 Blackburnian Warbler is an established breeder in the extreme SW corner of NF but goes no further.  This one found by Todd Boland was walking on the ground in a random location. Incredible views of a ridiculously coloured warbler hopping about in the grass. We had to go around stomping out grass fires it was starting when its throat accidently ignited the grass. It seemed to be getting lots to eat but normally would be higher in the trees. 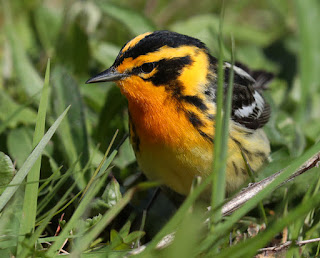 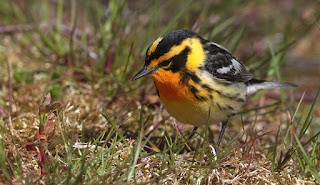 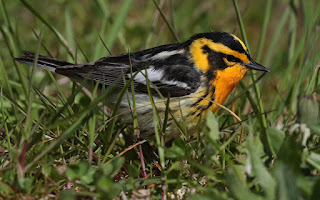 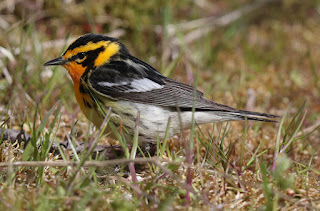 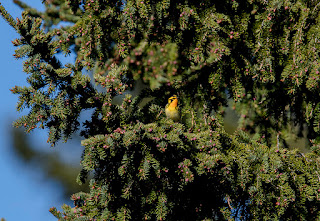 A Blackburnian Warbler in a more natural habitat on a day when the weather warmed up a little on Brooms Brook. 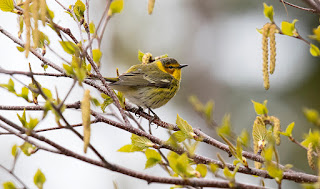 Cape May Warbler can be a  SOB to see in the tops of the white spruce forests that they prefer yet they are not that rare. During the cold this one descended to near ground levels for a photograph.  This one at our go-to-spot at Brooms Brook for Cape May, Bay-breasted and Blackburnian. 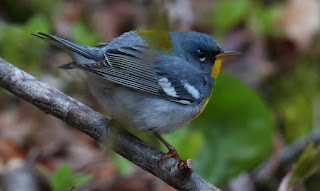 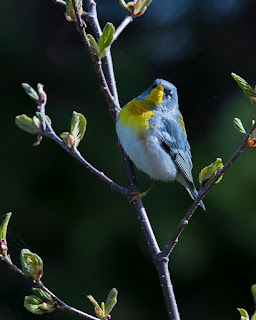 Northern Parula is certainly breeding in the SW corner of the province but it has yet to be confirmed. It is easier than Cape May or Bay breasted to find. Two different birds photographed. 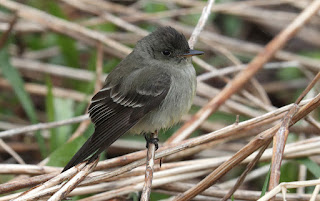 This Eastern Wood Pewee at Cape Ray was suffering from the cold while desperately looking for insect life on 3 June. This is an overshoot species that is not suspected of breeding NF but it could and perhaps has. 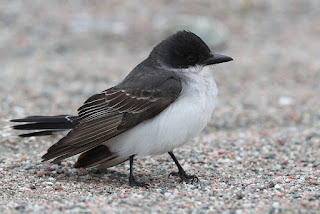 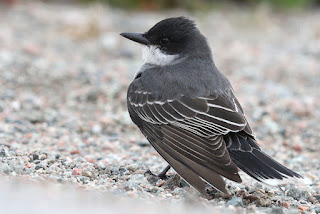 Seven Eastern Kingbirds on the ground at Cape Ray on 3 June really showed the grounding effects of the wickedly cold weather. Insects were not easy to find. I hope they made it. Eastern Kingbird is an overshoot from Nova Scotia. It has nested at least once in NF but is generally considered a routine late spring over shoot. 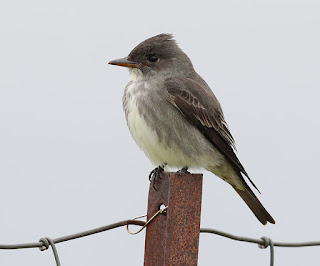 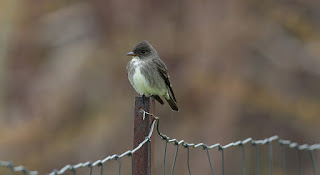 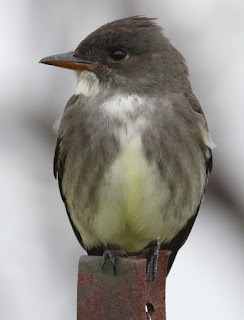 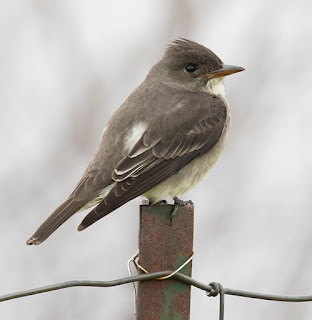 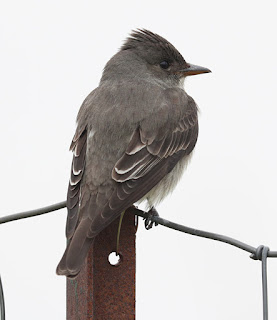 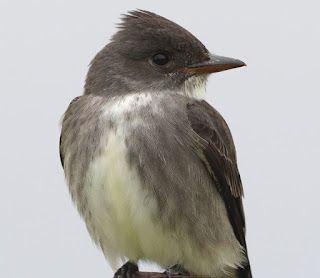 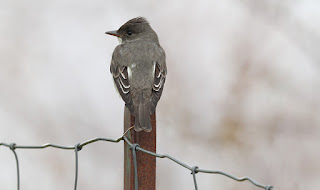 Ok this is a over kill on the Olive-sided Flycatcher feeding along the fence line by our Cottage Country Cabin. It was catching sluggish bees that I was disturbing while walking on the lawn. It followed me as much as I was following it. 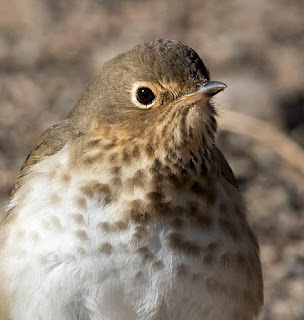 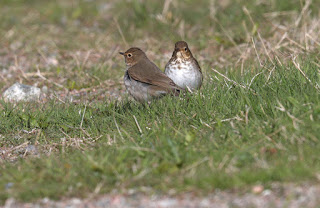 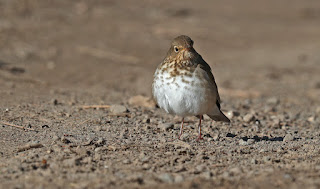 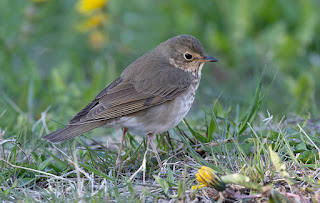 Swanson's Thrush was my second most looked at species during my week in the Codroy.  I learned a lot.. 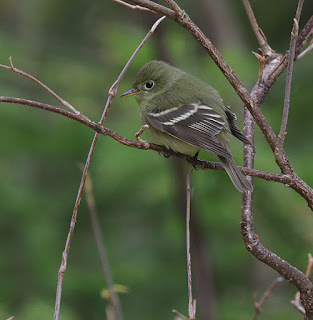 Yellow-bellied Flycatcher was bird of the trip because of the pure abundance and numbers of sightings per unit of time.  After a couple days of the very cold late spring weather they became fearless. They were more focused on finding food than being aware of  dangers in seemed. Twice a  YBFL landed on my car while I was inside of it.