Shooting Loons in a Barrel

There were many interesting byproducts of the 9 days of gale to storm force north and northeast winds that hit eastern Newfoundland from 27 March to 4 April 2017.  Most significant was the pack ice that traveled south at break neck speed to come into land along the entire northward facing coasts and east coast of the Avalon Peninsula. The ice carried with it large numbers of harp seals and most noteworthy large numbers of young hooded seals.  A few lucky people got to be where a polar bear came to land.  Unfortunately one bear 'had to be shot' for lingering too long around houses even after many deterrents were tried while the others were tranquilized and flown north into the ice far from land.

The ice caused some huge concentration of Common Eiders and one lucky observer photographed an immature Ivory Gull. Eventually the main pack of ice actually went south of the Avalon carried by the unrelenting north winds.  Finally the winds broke but then there was a strong Low pressure area generating gale force south winds.  The ice came right back! This time flooding the south shore of the Avalon Peninsula rarely touched by ice even in previous decades when Avalon pack ice was annual in winter.

Birds not used to dealing with the ice got trapped by the sudden appearance of the ice on the southward facing shorelines of the Avalon. Common Loons were most affected. During the heavy rain and wind of 8 April Ian Jones and Jeannine Winkel discovered large numbers of birds in the open water of Trepassey Bay. The ice had jammed in the narrows leaving the large bay unaffected by ice. Most noteworthy was a staggering total of 589 Common Loons.  In a normal winter day a good day total of loons would be 60 or 70.

The next day dawn foggy but without a wind.  A number of birders went toward Trepassey. The sights were quite interesting.  The Trepassey scene was lower than during the teeth of the gale the day before but as the fog lifted there were still there were 325 Common Loons, 2 Red-throated Loon, 35 Red-necked Grebes, 2 Horned Grebes, 300 Thick-billed Murres, 40 Common Murres, Razorbills, 1 puffin and various ducks.  Also along the shore between Trepassey and Cape Race were at least four pockets of 10-12 loons trapped in tiny patches of water against the shoreline.  So trapped they had no room for a runway to get airborne.  As I write we do not know the fate of these birds. The wind has not done much to move the ice back offshore.

In a more open space behind the wharf at Portugal Cove South a group of 11 Common Loons.found their refuge.  Potentially they could still get away from this confined water space but on the first day of the siege they were content to sit there in a group and wait to see what happened. One thing that did happen was locals drove down on the wharf to look at the odd flock of loons so close. For a photographer it was like shooting loons in a barrel. They had no where to go and they knew it, so remained peaceful so it seemed. 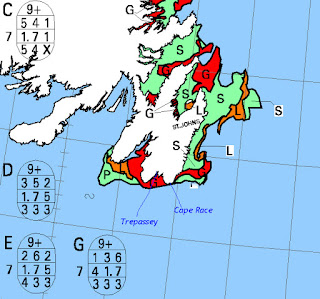 The ice chart for 9 April 2017 showing the limited amount of ice by how is huge the coasts.  The Red colour indicating heavy 100% ice cover. 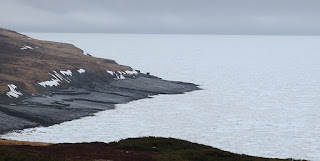 A picture of The Drook on the Cape Race road showing the extensive ice on 8 April 2017. A rare scene for this location.

Part of a group of 350 adult harp seal 2 km offshore from The Drook. 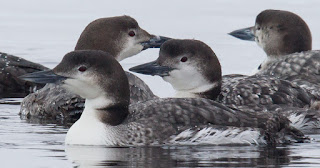 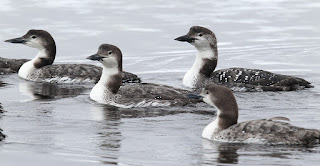 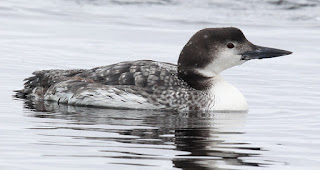 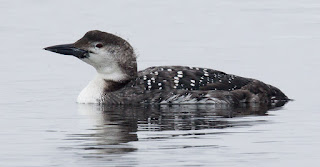 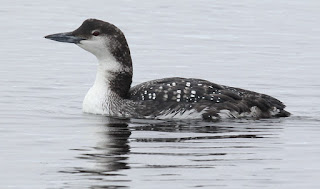 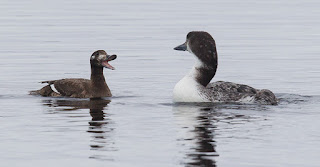 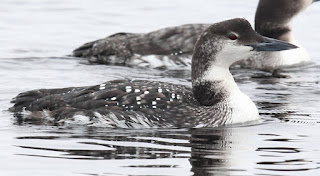 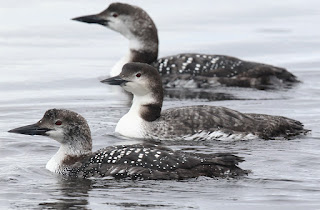 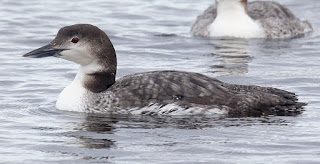 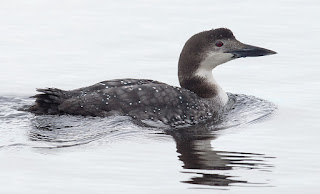 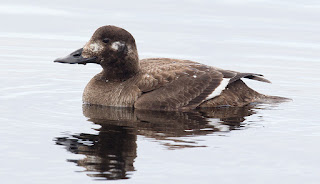 More Thick-billed Murre flying in Trepassey Bay. Most of them left and flew out over the ice when the sun came out and breeze picked up. 8 April 2017 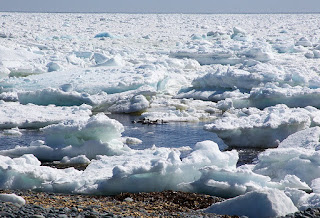 A group of Common Loons trapped by ice at Long Beach, near Cape Race - 8 April 2017 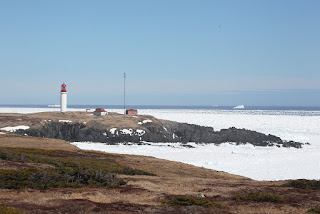 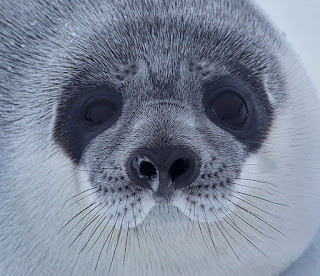 A close encounter with a young Hooded Seal at Cape Spear on 4 April 2017. Saw more Hooded Seals in two weeks than the previous 40 years in Newfoundland.

Posted by Bruce Mactavish at 07:18