KELP GULL for Christmas in Newfoundland

No one could sleep Christmas Eve knowing there was a Kelp Gull in St. John's after belated news of a Kelp Gull photographed on 23 Dec reached the birding community on Christmas Eve. It was Shawn Fitzpatrick with his fresh eyes for odd gulls that noticed it and luckily snapped it on 23 December.

After going through the Christmas morning family rituals with a calm front but boiling inside I was granted freedom at 08:30. I  texted Lancy Cheng who was waiting to hear for the OK. Picked him up and we went to Quidi Vidi lake. It was blocked with gulls.  Lots of interesting birds at the Rennies River inflow, most of them becoming familiar.  We went down to Virginia River mouth the site of the actual sighting on 23 Dec.  Took shelter from winds behind thick pine trees. Lots to look at. We could see Alvan Buckley up on an excellent perch with shelter by the 'blue building' from wind 150 m away. There was a flush caused by a rather aggressive goshawk. Shortly after the cell phone rang. It was Alvan who said - "I have a candidate for The Bird.".

Lancy and I got there in no time flat. Looked through Alvan's scope locked on the bird. After memorizing Shawn's photos I knew without a doubt this was definitely THE GULL. We watched it from about 200 m for 15 minutes. It was standing then sat down.  Scope replaced by camera on the tripod for terribly long distant photos. And waiting for the next mass flush which are all too frequent at the lake from passing Bald Eagles and now this new bully goshawk, It happened. I was ready but The Gull did not fly into the wind as expected but angled left leaving little opportunity for nice flight shots.

We spent the rest of the morning trying to relocate the bird but no luck. About eight other birder cars appeared shortly thereafter breaking away from Xmas morning duties  It was not relocated. But it will be, Eventually we will nail this bird into the ground with photos and views. It is a keeper. It is a KELP GULL. This is Newfoundland. 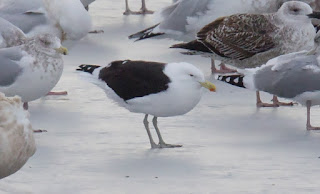 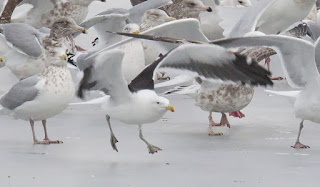 Note P10 still a long way from fully grown but showing the only white mirror on the wing.

WHY THIS IS A KELP GULL

This is not an obviously different gull among the flock. It is as dark above as the abundant Great Black-backed Gulls. Easily overlooked among them.

This why it is a KELP GULL in no particular order of importance, plus some other features worth noting.

a) The legs are greenish. Not pink, gray or yellowish.  Presumably would be yellower in breeding plumage.
a a) the only white mirror in the outer primaries is the one on P10 not fully grown in this bird. GBBG have such a unchanging P10 P9 pattern with a huge clean white tip to P10 and significant white mirror on P9
b) size is a little smaller than the average Herring Gull.
c) head is pure white. Blocky shape, long, low flat crown. Many GBBGs also with pure white heads in winter.
d) upper parts every bit as dark or even darker than a GBBG.
e) tertial crescent wider than GBBG and LBBG though not as wide as Slaty-backed Gull.
f) white tips of folded primaries small. Smaller than GBBG and our Herring Gulls in adult plumage.
g) bill stout, rather parallel from face to gonys. Significant gonydeal angle. Base of bill through scope slight greenish yellow.

As it would happen when you are looking for something better, the elusive but always around Yellow-legged Gull present was getting in the way all day. It just sat there saying "take my picture". 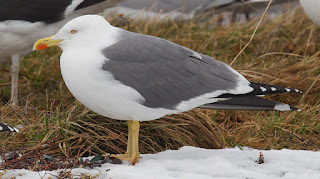 Yellow-legged Gull.  Note  the 'rare' shade of gray somewhere between a Herring Gull and but closer to a Lesser Black-backed Gull. Who knows how this shade of gray will appear on your monitor.  A peculiar feature consistent feature with ALL Yellow-legged Gulls seen in Newfoundland but I can not find in any pictures of Yellow-legged Gull from Europe, even from the Azores is the wide spacing between P8 and P7. Maybe it is only these longer winged birds that can make it all the way between the Azores and Newfoundland.  The legs always seem a bit thick and completely yellow even around the joints.

POSTSCIPT
Time predawn 27 Dec 2016. There were no sightings of Kelp Gull on 26 Dec during a very cold and windy local CBC day.  Paul Jones of  Ottawa sent a photo of a Kelp Gull taken in November 2016 in Chile.  Note the pale green leg colour of this bird is a match for the St. John's bird. Also note 1) the broad white 'skirt', the white tips of folded secondaries, 2) tiny white tips to primaries, 3) white mirror on underside of P10 isolated from a black tip, 4) darkish eye is like St. John's bird as well.

GOOD LUCK OUT THERE. This bird must and will be found again. 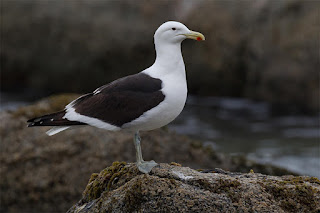