On 21 March 2015 Ken Knowles, John Wells and I were finishing up an Avalon Loop trip with a last stop of the day in Ferryland.  There were four snipe in an open wet place among the deep snow pack. There had been several snipe as per usual wintering in Ferryland but they were not usually at this particular spot.  We stopped to look at them from the car. Immediately we noticed one was a little yellower than the other three.  Yellowish snipe have been our first clue to check further for Common Snipe field marks.  It also had thin even barring in the tertials, the second feature we look for when trying to identify a possible Common Snipe.  Both these featured looked excellent in our perspective on Common Snipe. But the next step required to nail the identification was seeing, usually meaning photographing the underwing.  A largely white underwing with the white bars wider than the black bars and even some areas of unmarked white was in our mind was the absolute clincher. 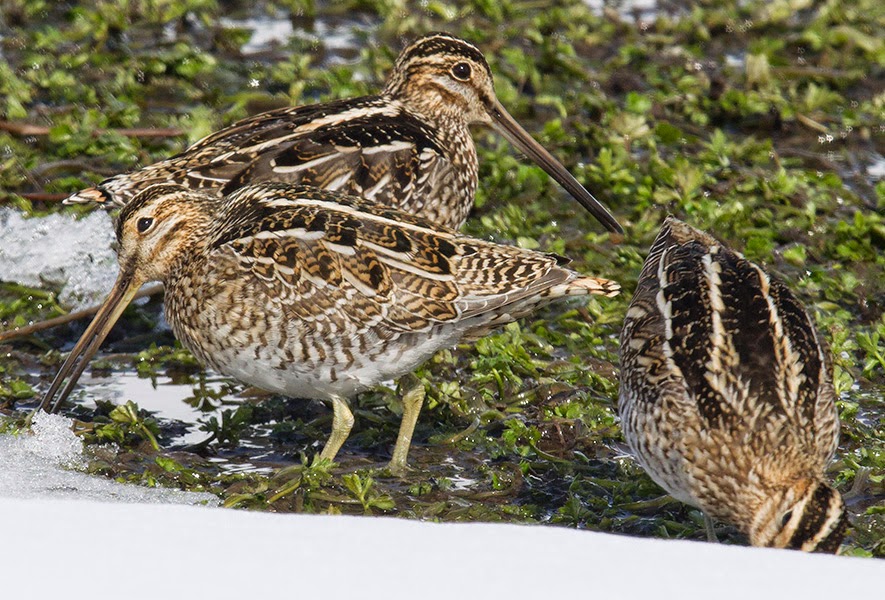 The suspect Common Snipe is facing left. In the bright light the paleness of the bird less apparent than in overcast light.  21 March 2015 Ferryland.

We didn't have a lot of time so left the bird unidentified.  The next day information surfaced that Andrea Dicks had photographed that snipe with the others in late January. In the dull light the suspect Common Snipe looked particularly yellow. This inspired Alvan Buckley to visit Ferryland on 24 March.  His shots included one blurry shot of the underwing of the suspect snipe that showed much promise for Common Snipe. 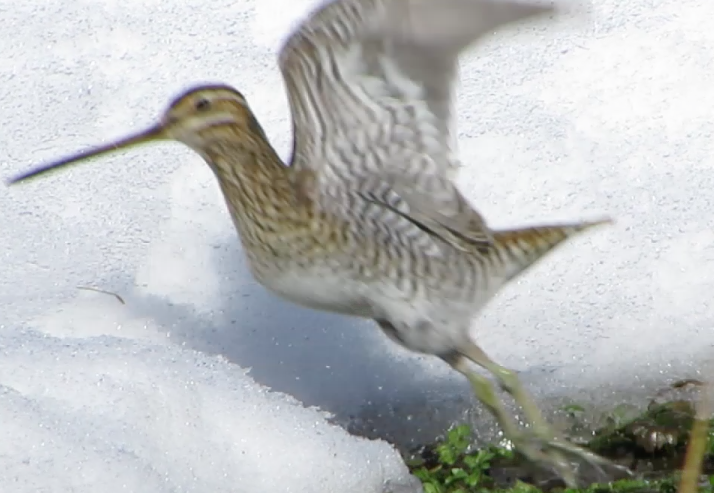 On 25 March I took the morning off work and spent 3 1/2 hours with the camera trained on the snipe hoping for that one excellent shot of the underwing. It never happened. But I got shots showing some details of the tail and a sneak peek of a partial underwing. 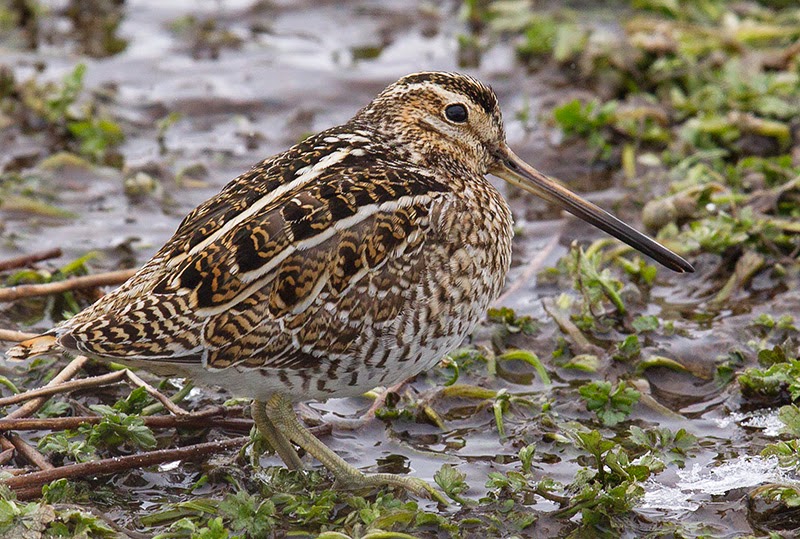 This and all the snipe shots below taken on 25 March 2015 at Ferryland. 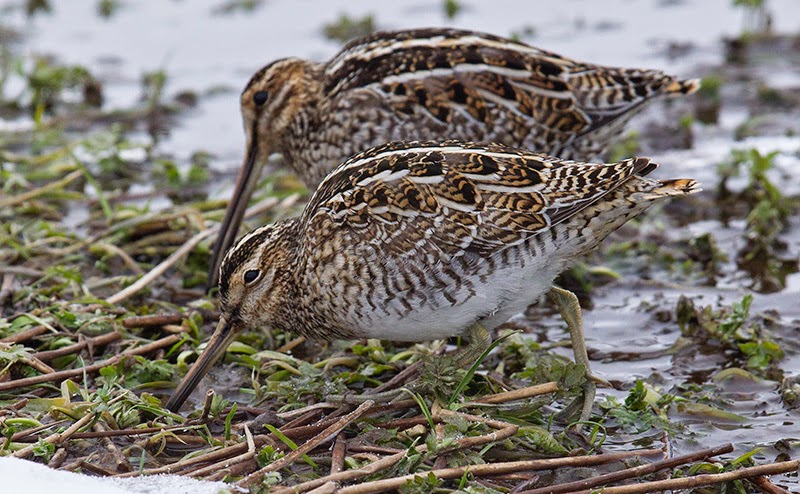 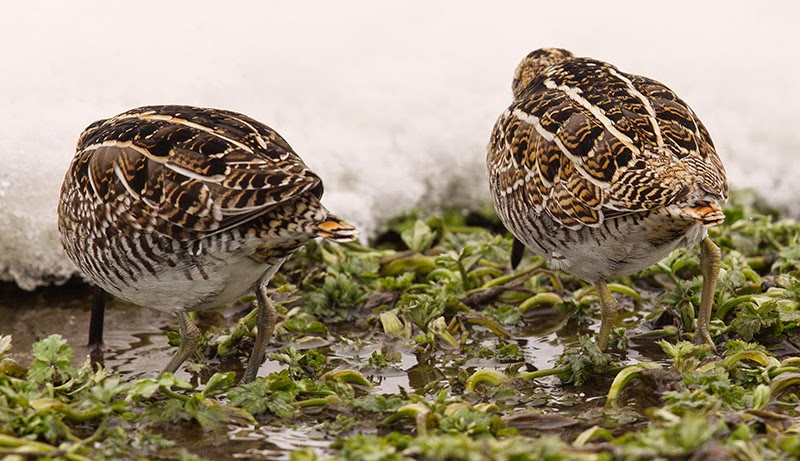 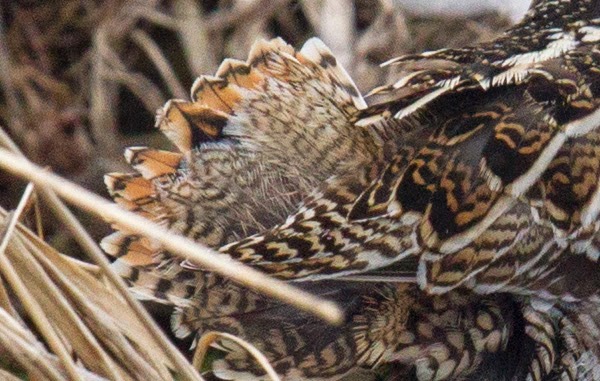 A long distance crop revealing some details of the tail. 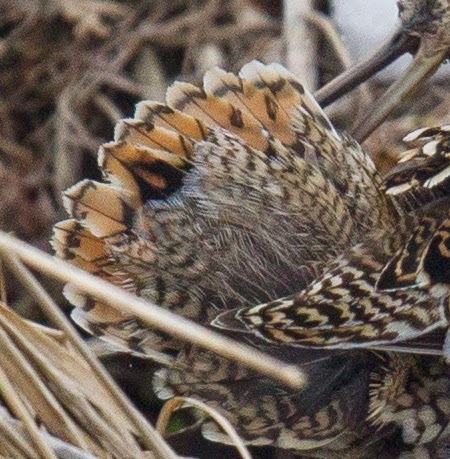 How many tail feathers?  Wilson's Snipe usually have 16 while Common Snipe usually 14.  In several similar tail shots I get 12-14.  Hard to know if some feathers are hidden from view. 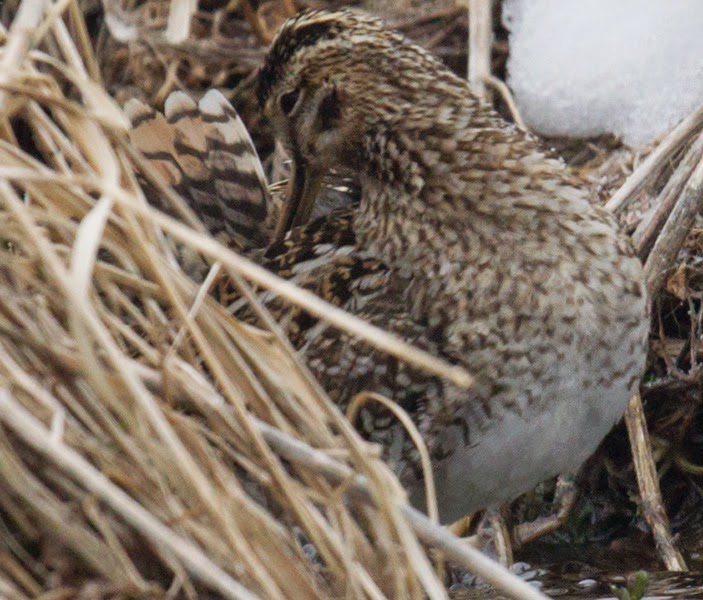 A vital shot.  This showing underside of outer most tail feather on right side. Is this too much barring for a Common Snipe? Two North American references show widely spaced barring in this feather for Common Snipe but European references show a more diffuse irregular pattern of internal markings.  Could it be North Americans are using east Asian Common Snipe, the source of Alaskan  Common Snipe, for illustrations while the Europeans are using snipe in their backyards???  On Common Snipe this feather is wider thus producing a lower drumming sound during spring display. 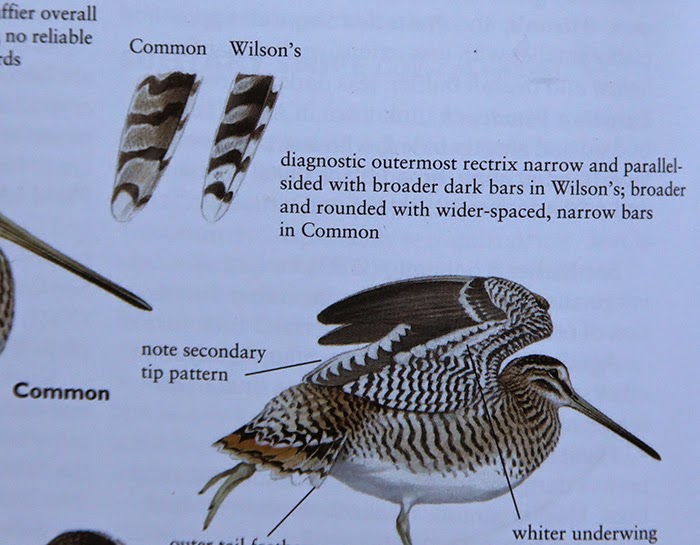 Stolen from the excellent book, Rare Birds of North America (Howell et al. 2014). Shows their depiction of the outer most tail feather of Common vs Wilson's Snipe. 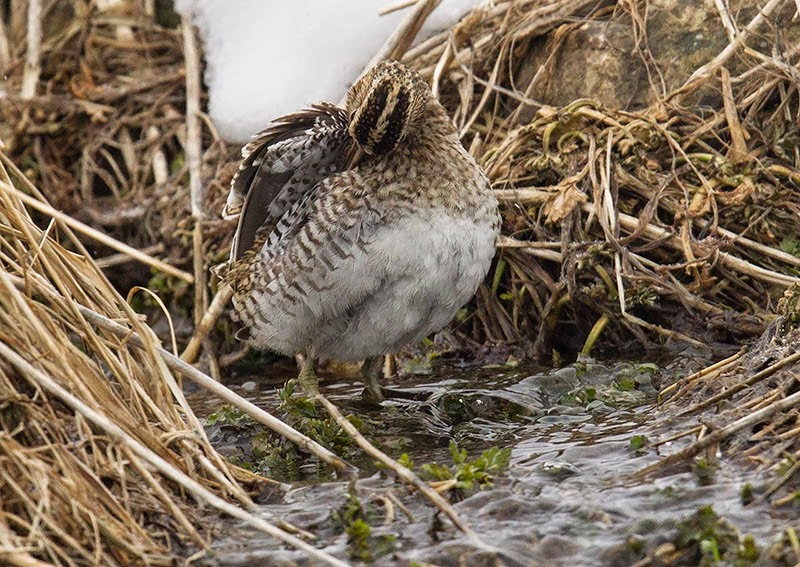 Sneak peek at underwing coverts. They look quite white with small black markings.  Seeing this much leads one to assume the rest of underwing coverts would look like this and thus be a certain Common Snipe according to Newfoundland rules. 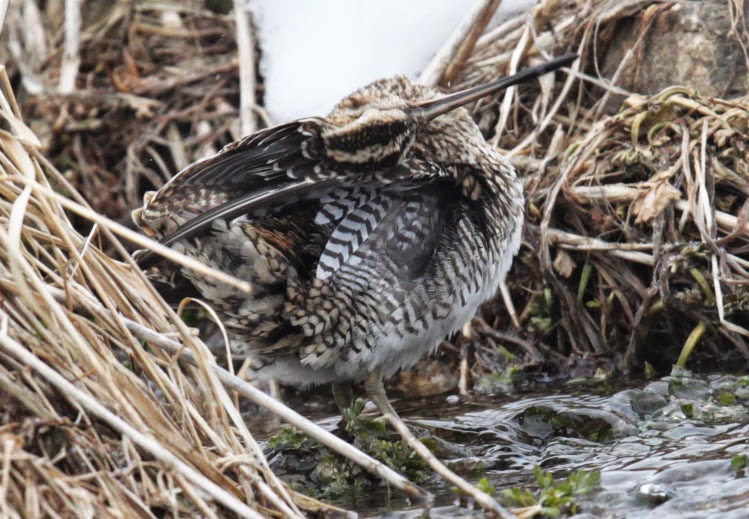 A view of the axillars. The white bars being significantly wider than the black bars is another indication of just how white the underwing coverts probably are. Again it looks promising for Common Snipe. On Wilson's Snipe the barring is typically near equal width. 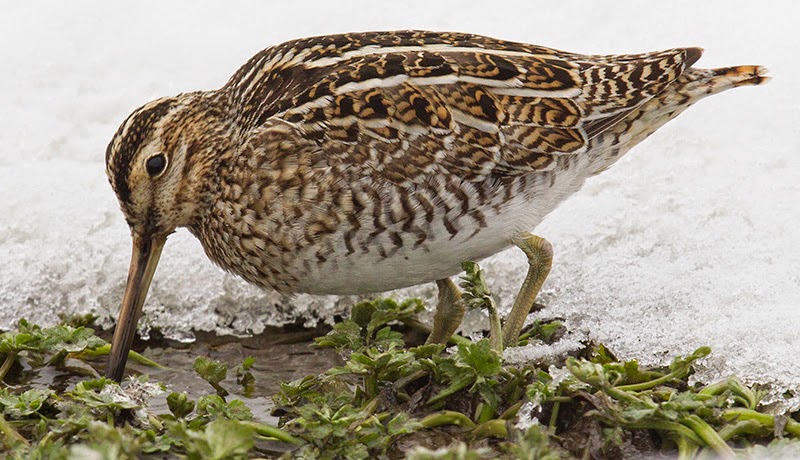 Is this a Common Snipe?  I think it is but still remains to be proved with a good photo of the underwing. The issue of identification of Common vs Wilson's Snipe is still in its infancy. Even when we do know all there is to know it is always going to be near impossible to be sure on a standing bird. Identifications will require details on underwings and outer tail feathers, features that snipe are reluctant to reveal.