Eider watching out of desperation birding becomes a pleasurable past time for late winter birding on the Avalon Peninsula, Newfoundland.  It boils down to getting good looks at male King Eiders. Sometimes you see a few drakes and in a good year you see more than you could carry away in your arms.  Seeing eiders up close requires an effort of concealment because eiders in Newfoundland and Labrador view mankind as their biggest enemy.  When you get the eiders to come close there is lots to see. You can age the males and females but it is more interesting to assign the birds to borealis or dresserii.  Nearly all are borealis and there are some showing shared bloodlines between borealis and dresseri. Pure dresseri seem to be rare.  That is another forum for another discussion. Today, 21 February 2015, at Cape Spear I was stopped dead in my tracks by an eider with a brilliant carrot-orange bill.  I knew this bill colour was a flagship for the western race of Common Eider called v-nigrum.

Attached are some photos of the bird. As per usual environmental conditions were far from perfect.  I spent five hours at Cape Spear hiding in a hole in the rocks to get these photos which are cropped and in some cases slightly sharpened but otherwise not manipulated.

Opinion::: through the scope I saw a blank white underside to the chin while it preened. This view happened several times yet too far away to try for a photo.  If it had a black triangle on the underside of the chin then it was not bold.

Below are the photos. If this in not a v-nigrum then it is an example that all out of range claims must consider. 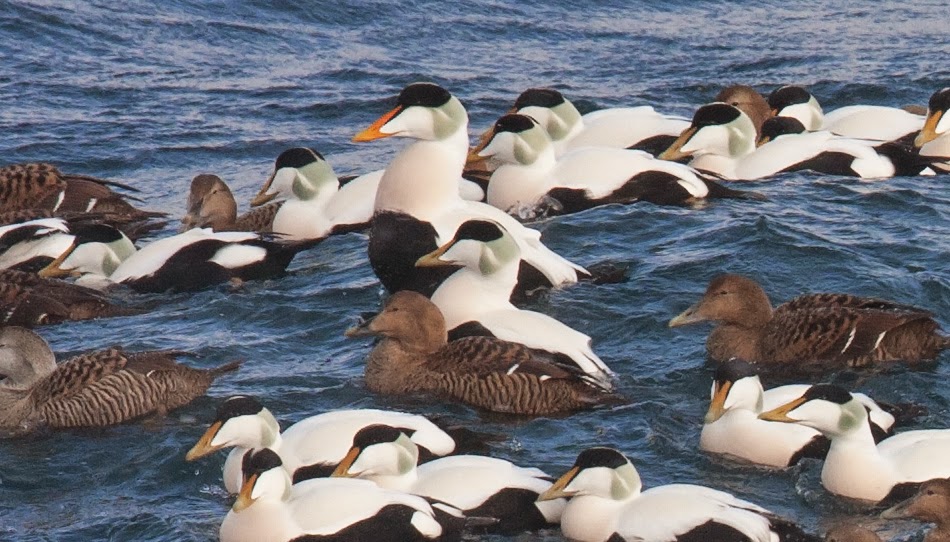 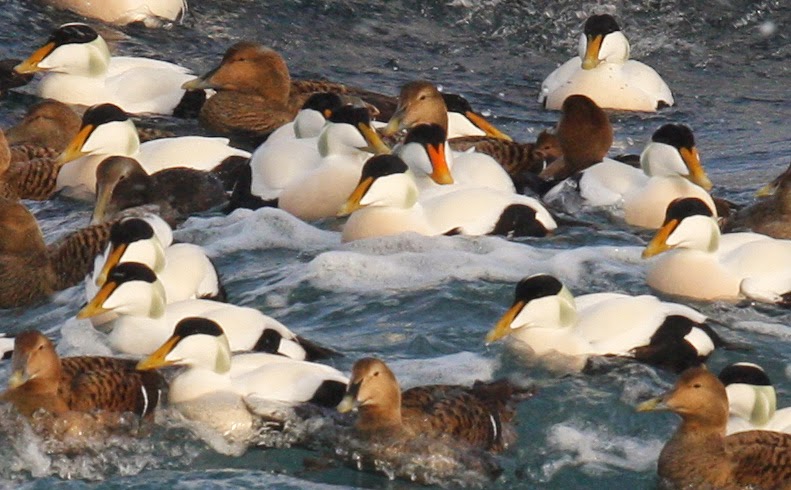 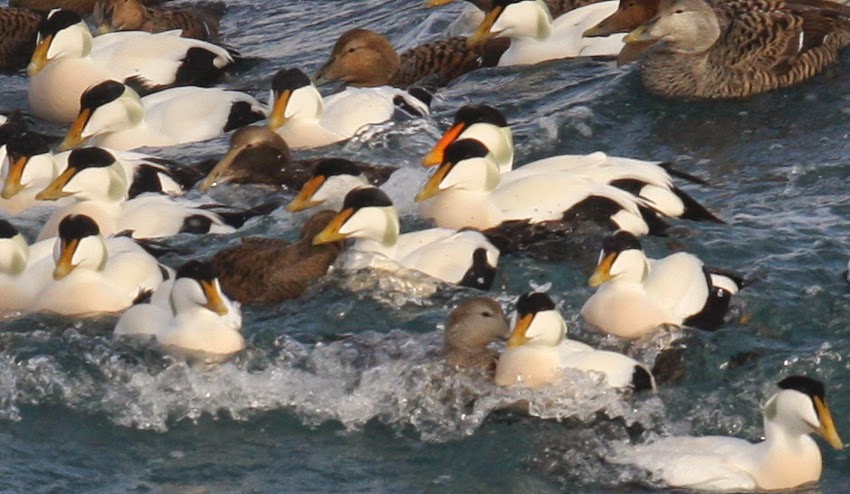 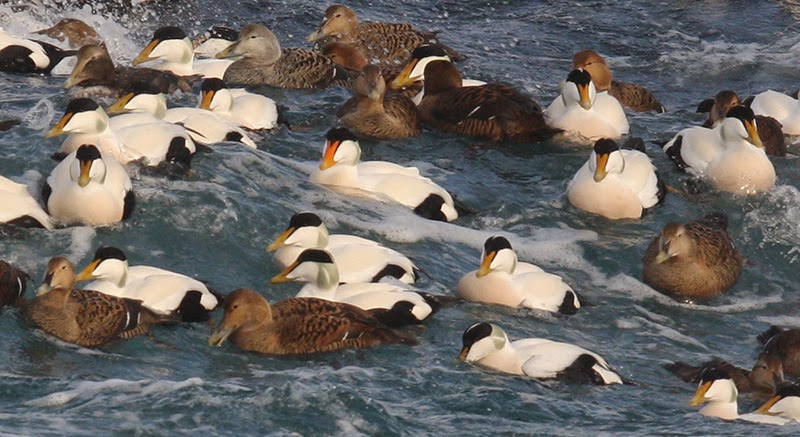 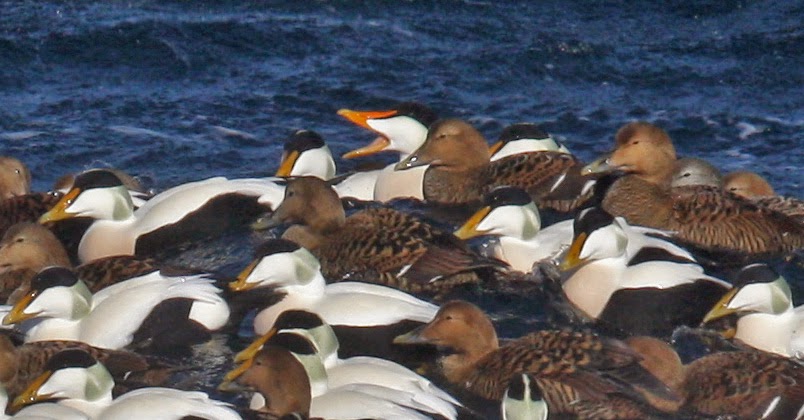 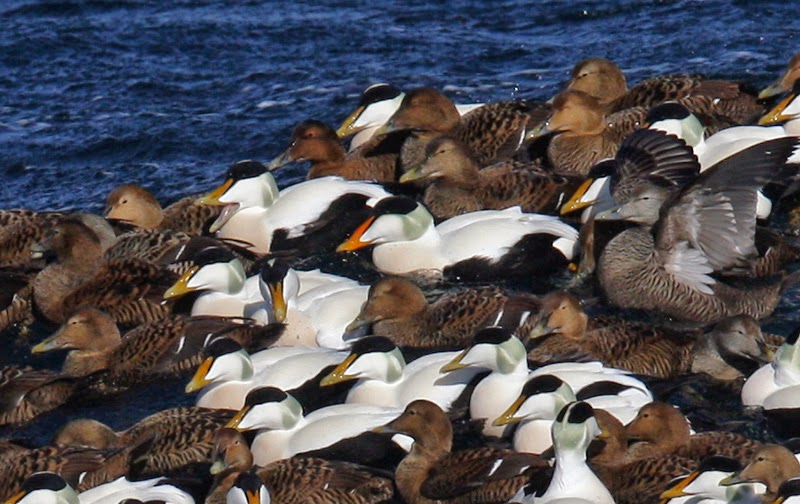 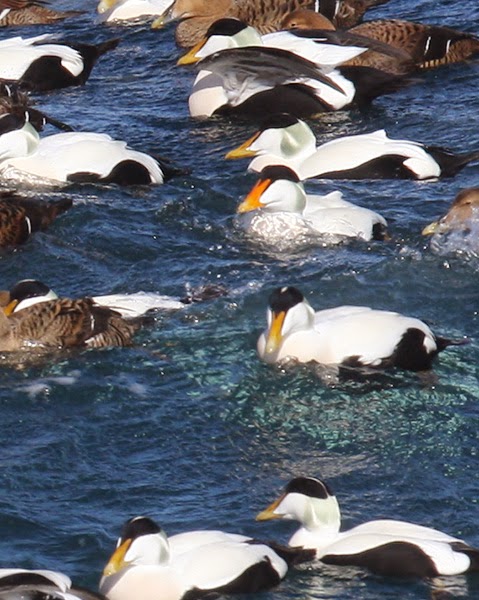 ADDENDUM and then some...
Martin Garner of Europe has a keen interest in Common Eider subspecies including being on the scene of the Western Palearctic's first v-nigrum in Norway
http://birdingfrontiers.com/2014/02/19/pacific-eider-in-norway-a-new-western-palearctic-bird/  His thoughts on the subspecific identification of the yesterday's bird at Cape Spear are a shortcut to anyone's research. Below are some of his comments:

I don’t think this is v-nigrum. Thought it must be a first glance but appears to completely lack the wacky head character. Specifically v nigrum should have deep curvature to base of black cap- horizontal on this bird with forehead bump- very typical of borealis. There is not enough green under black cap.  I don’t think the basal lobes feathering intruding into bill base are big and aft enough the bare skin frontal process should be short-looking for v nigrum.  So either it is an extreme coloured borealis (not impossible) or that v-nigrum you had few years back got cheeky with the locals??

So it could be a hybrid v-nigrum x borealis, or maybe there is a cline in features from the western Arctic to borealis in the eastern Arctic.  Apparently v-nigrum is sometimes found among wintering Common Eiders (borealis) off western Greenland so there is opportunity to get tied up with a borealis. The message this bird shouts out is that the shocking orange colour of the bill is not a stamp of approval for v-nigrum.

This being said there is still a good record of v-nigram for Cape Spear and as far as I know it is the only confirmed record of this subspecies for Atlantic coast from Labrador to Florida. It was March 2005. This bird has it all including the black "V" under the throat and curved black cap.  The bird is pictured below. 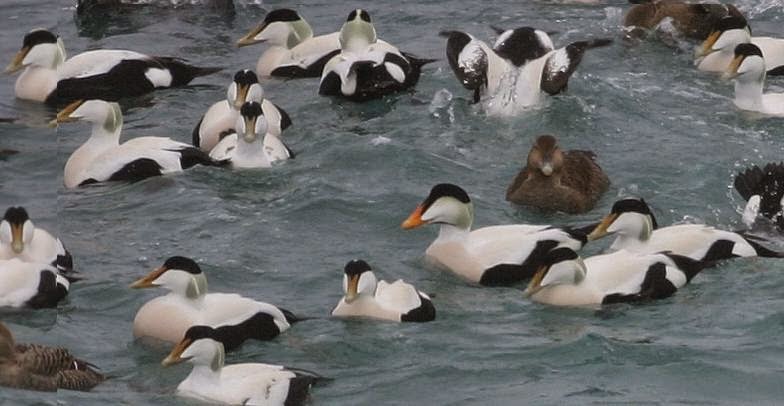