Tame Fulmars by a Nunavut Shore

Round two of marine mammal surveys at Pond Inlet, Baffin Island, Nunavut, Canada took place in late August.  Before and after aerial surveying Wayne Renaud and I scoped over Eclipse Sound from a slope by the town museum and culture center.  There were many kittiwakes to look through hoping to find the Big R Gull but no luck yet. One Sabine's was as good as it got. For a Newfoundland birder the 5-20 Thayer's Gulls per day was a treat. Nice through the scope but too far for useful photos.  On the last afternoon a bunch of fulmars were attracted to something on the shoreline. While common in Eclipse Sound and not wary of land like they are in Newfoundland, we hadn't seen them so close as this.

I walked down to the shoreline and realized the fulmars were taking turns pulling on a piece of fat tied to a piece of fishing line tied to shore.  Not sure of the purpose of this but at least there was no hook on the line. The fulmars were exceptionally tame. Sitting on the rocky shoreline, some birds swam up to me looking for handouts.  You never see this behavior in Newfoundland where you are lucky to see a few from shore during a storm.

The low light was bright. The whites were difficult to capture digitally but the birds were so close snaps had to be taken. 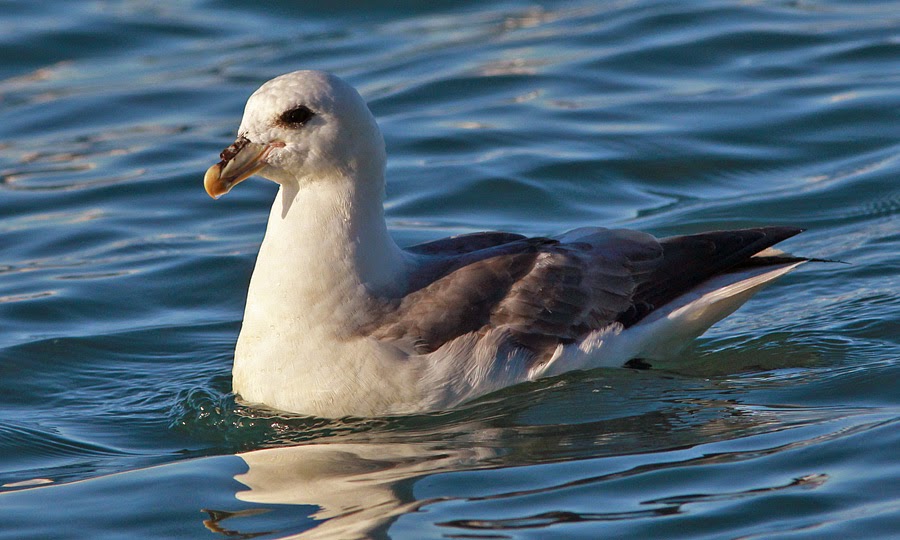 This Northern Fulmar and others swam within a few meters of me sitting on the shoreline looking at me wondering where the food handouts were. 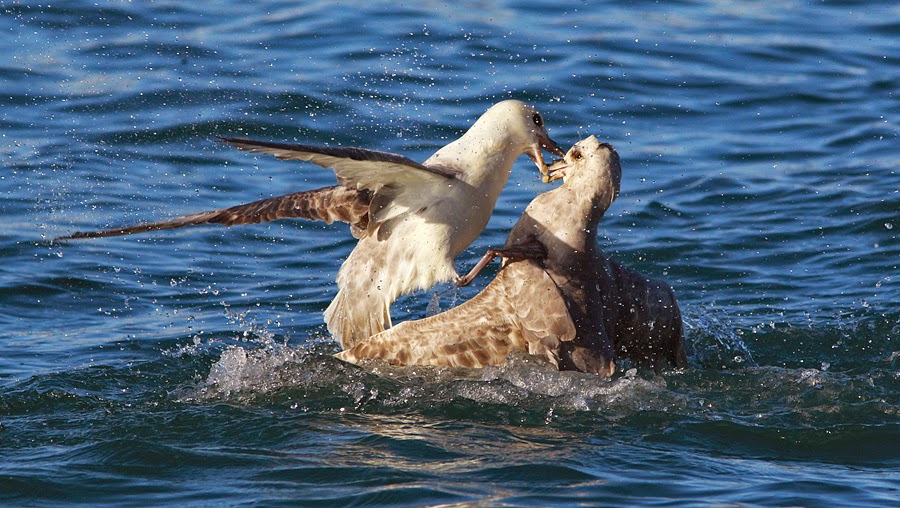 A couple dozen fulmars were attracted to shore by a chunk of fat tied to a fishing line.  What the reason for this was, I don't know. There was much squabbling over the one little piece of fat. Fulmars express themselves both in love and war with that strongly hooked bill.

This is the piece of fat all the fighting was about. 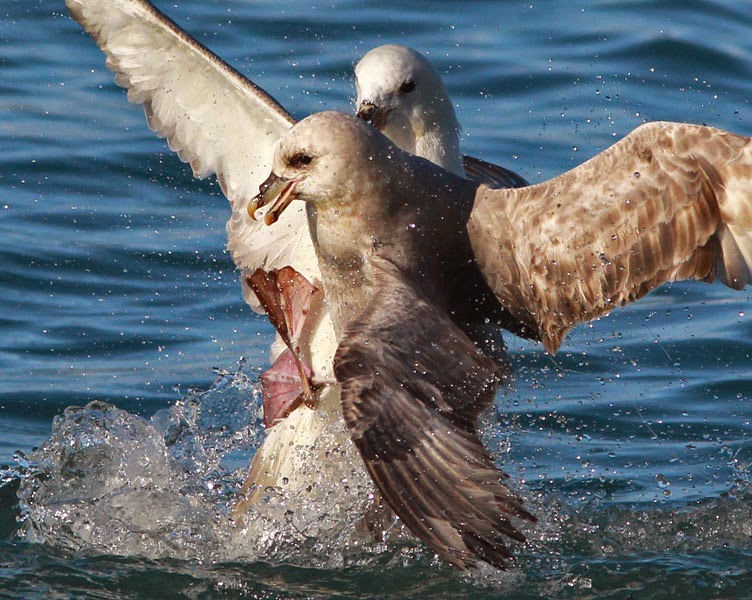 About 10-15% were dark morphs.  Surprisingly most of the birds had black coloured nostrils.  Over the years at sea I have been taking photos of many fulmar looking at bill colours. I decided there was no pattern of distribution to the highly variable bill colours.  After seeing the high percentage of black billed fulmars in one location I may have rethink what I thought I knew.

Remember these photos were all taken while sitting on the same rock on the shoreline. 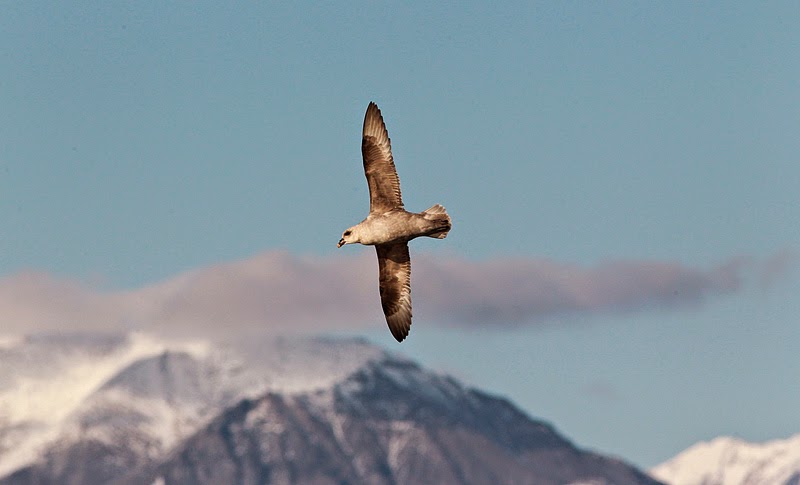 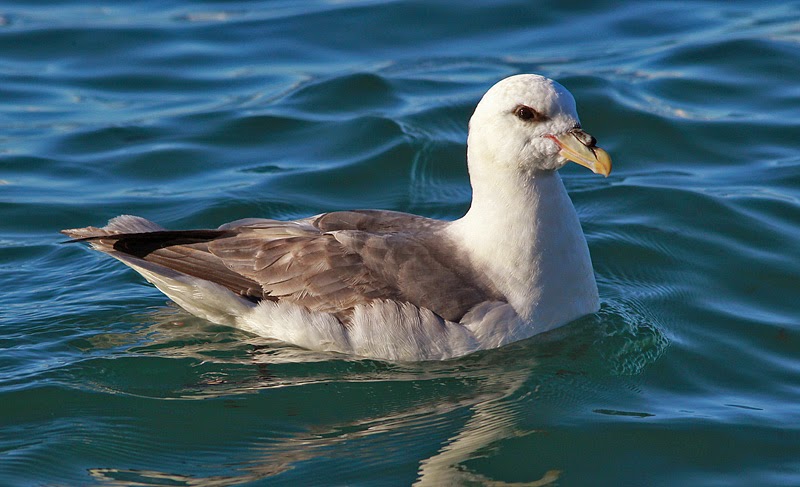 Waiting, still waiting for a chunk of blubber. Maybe bread would have worked. 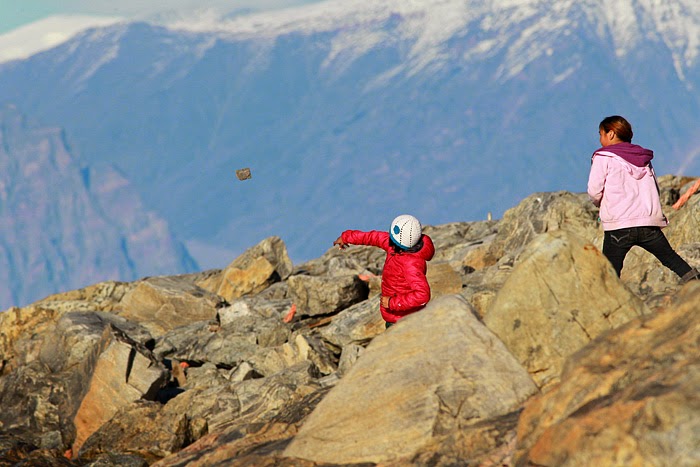 Kids were throwing rocks at the fulmars farther down the shoreline. 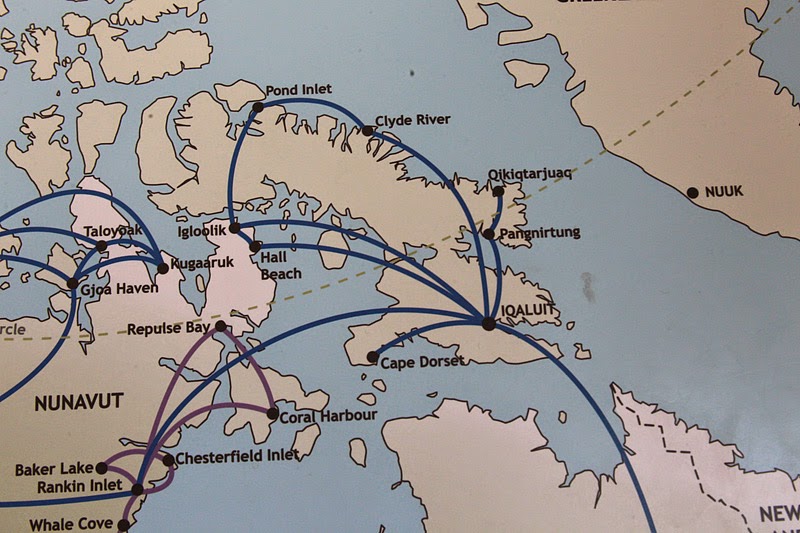 A picture of Baffin Island showing the location of Pond Inlet. We are at 72 degrees North. 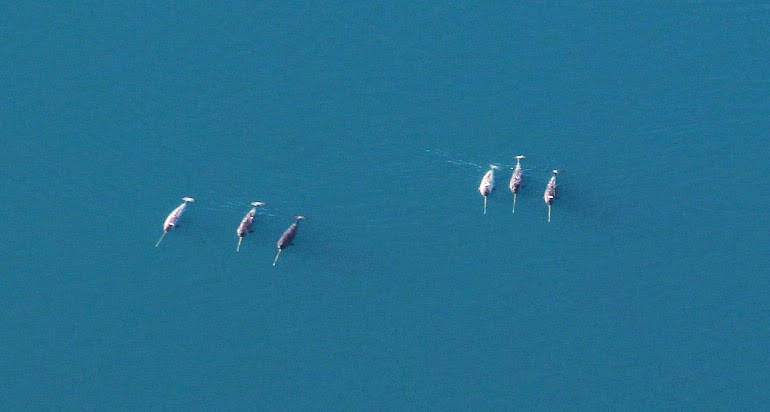 Most of the day was taken up by work which was centered around counting these things. A tough job but someone has to do it.

Post Script; After viewing the photos on this post on my home and office computer I am disappointed with the published result. The fulmars came out warmer than real life.  The problem was using a portable laptop in a hotel room in Iqaluit, NU yesterday.  A slight tilt of the screen changes everything. The particular laptop I use for office field work strongly emphasizes blue shades. My attempts to make it look right on the work laptop made the birds look far too warm for the average computer. Oh well, instead of trying to fix it, I'll look ahead to making the next posting better. That could be soon with the next 72 hours devoted to Avalon birding.