On Sunday 8 December Paulette King found a strange bird dead in her Clarenville back yard. Being the size of chicken but iridescent purple and green with long spidery yellow toes she knew she had something exotic. Through her friend Lena who knew someone who knew someone an email eventually reached me with the following photos attached asking if I could help identify it. 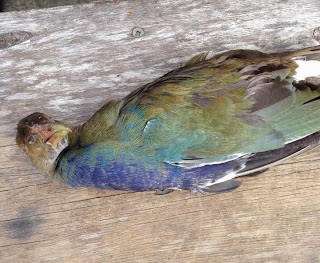 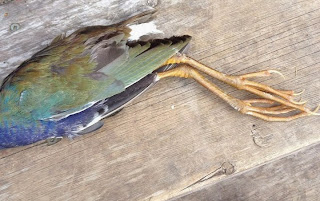 The front and back half of Purple Gallniule photographed with a Smart Phone. It was found freshly dead in the backyard of Paulette King in Clarenville on 8 Dec 2013.
Up to this point no birders have seen a free wild Purple Gallinule in the province of Newfoundland and Labrador. There are probably a dozen records for the province and most of them are December/January when cold fronts sweep over the southeast US freezing out Purple Gallinules.  When forced to move and it seems that some of them get caught up with a large Low pressure area and go with the flow of strong southerly winds  They go with the flow until they get tired and drop into the sea or keep going until they get to Newfoundland. After they get here they probably wish they died first. December/January records are usually in weird places like fishing boats offshore, a hedge in a backyard or a garage. There were two very large and powerful Low pressure areas with strong south winds during the week before the gallinule's appearance.


I have seen two live but uncountable Purple Gallinules in Newfoundland. The first was in Pierre Ryan's bathroom in the late 1980s. Pierre works for CWS.  It landed on a government resreach vessel around Christmas time.  When it was brought ashore, Pierre received it and kept in his bathroom  for a couple of days before it entered a better rehab situation.

On 30 Dec 2005 I was out making the birding rounds in St. John's on an unseasonable warm and sunny day after the passage of a deep Low pressure area. I got a call from the receptionist at the CWS office saying someone had just brought in a Purple Gallinule and there is no one  to take it. Can you come for it?  As it turned out a motorist had seen it running around Forest Road where I had already been that morning. He thought it needed help so he caught it and brought it into the CWS office.

I went to the CWS office and got the bird and decided to release it at Long Pond marsh. Being an unseasonably warm autumn the marsh was still unfrozen. It seemed like the best situation available for a Purple Gallinule in Newfoundland. I called a few friends to witness the release. It took to the marsh like it had never left.  Within a minute it slipped into the privacy of the grass and reeds. That night winter returned with a 40 cm of snow and cold north winds. 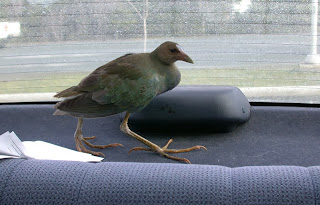 The Purple Gallinule in the back window of my car enroute to Long Pond marsh for release on 30 Dec 2005. 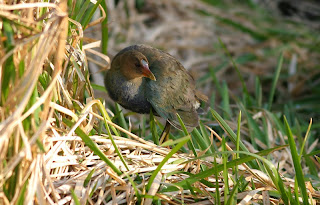 Posted by Bruce Mactavish at 16:34