On Saturday 7 December Ken Knowles, John Wells and I counted 91 Snowy Owls on the Cape Pine road and adjacent St Shotts area. The next day at Cape Race about 20 km to the east I counted 206 Snowy Owls. This adds up to 297 owls when you add in four more I saw near Cappahayden it turns into a 301 Snowy Owl weekend.
This mega Snowy Owl influx into southeastern Newfoundland started  at Cape Race. Weekend counts go like this - 3 on 15 Nov; 42 on 23 Nov, 138 on 1 Dec and 206 on 8 Dec.  Snowy Owls appeared in other eastern extremities like Cape Spear with a maximum of 12 and Cape Freels with a maximum of 6. There were numerous sightings of singles here and there in eastern Newfoundland as well but there was a paucity of records from western Newfoundland.
Snowy Owls were also appearing far offshore on ships and oil platforms. At Cape Race Snowy Owls were seen flying in off the ocean as well as flying high, fast and far south into the abyss. One made it to Bermuda. Surprising none have been reported from the Azores yet.

Meanwhile the rest of Atlantic Canada and the eastern United States was also enjoying one of the biggest inflixes of Snowy Owls in living memory (some birders have not lived that long!).  But none of the counts from these areas touched what was happening at the southeast corner of Newfoundland.
Where did the owls come from and why?  I won't go much into the classic explainations for Snowy Owl irruptions in the south right now but below is some information about the possible source of the Snowy Owls that I got today,
First I found out where Snowy Owls were in low to normal numbers in the Canadian Arctic (Rankin Inlet on western shore of Hudson Bay, Igoolik on the Melville Peninsula and northern Baffin Island including Bylot Island - information thanks to Alastair Franke, University of Alberta).   Greenland was also ruled out as a source where David Bortemann in communication with biolgists working around Greenland reported normal or low numbers of Snowy Owls during the summer of 2013.  In the end several sources pointed to Northern Quebec as having a big lemming year and a boom year for Snowy Owls.  I don't have many details yet but this mind boggling picture below is probably enough to answer the question about the location of the source of the current Snowy Owl influx in eastern North America. 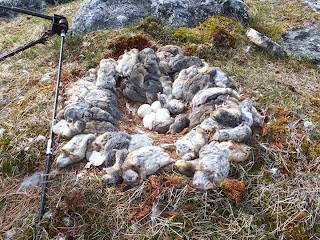 A Snowy Owl nest in northern Quebec in 2013 with 70 lemmings and 8 voles brought to the nest even before the eggs have hatched. (photo by J.F. Therrien, lifted from Arctic Raptors Facebook page)


What follows are some Snowy Owl pictures from the December 7/8 weekend at Cape Pine and Cape Race. One intriguing feature brought to my attention by David Bortemann was the little ear tufts shown by most of the owls.  Yes we all know Snowy Owls have little ear tufts that you sometimes see but the ear tufts were visible on most the owls. Was it becuase the owls were so skinny and with no fat between the ears the skin was pulled tight and the ear tufts became erect???? Yah that is reading a lot into it but the fact is that most of these owls up close are showing ear tufts.You don't see it often on the multitudes of internet Snowy Owls.

Below are just a few Snowy Owl photos from the 301 Snowy Owl weekend at Cape Pine and Cape Race. Note the little ear tufts on every bird and compare this with other images found on the internet. 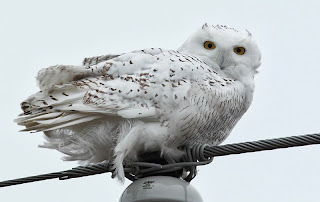 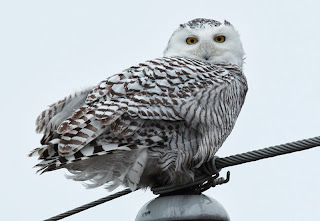 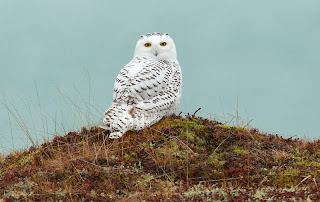 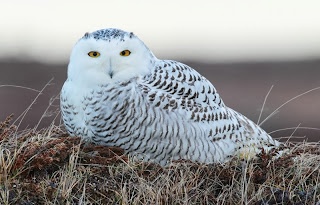