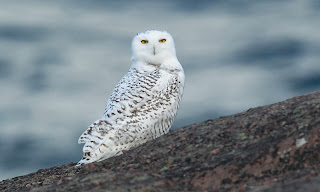 The Snowy Owl at Cape Spear on Thursday.
Word of EIGHTEEN Snowy Owls on the Cape Race road today (Richard Thomas, Tony Power) has fueled speculations that this could be a really big Snowy Owl year. The kind that happens every 10-15 years. There are lots of factors pointing to Saturday being an even bigger, maybe much bigger day.  For one thing the winds will be light to moderate NW over night. This should concentrate them at Cape Race the same way the wind concentrates hawks during autumn migration.  For the last two days the Avalon Peninsula has been stuck in the eye of a winter storm that has nailed parts of eastern NF with snow and powerful North winds. Not sure if Snowy Owls would fly through that kind of weather but one thing for sure is they won't be going offshore where a lot of them end up during such influxes. As the storm weakens and pulls away over night there will be NW to West winds across the island. Snowy Owls grounded by the weather in western NF for the last 48 hours will be given a chance to move tonight. They don't know where they are going other than south.  A mass movement over night could focus a lot of them at Cape Race tomorrow. Not only that there should be reports from other places like Cape Spear and within the city of St. John's.

Plan of action for myself? I am very much looking forward to being on Cape Race road as the sun rises on Saturday morning with Cape Race junkies Ken Knowles and John Wells.