The VIRGINIA'S WARBLER in Newfoundland - A true story.

Vagrant hunters in Newfoundland are aware of what excellent birds stray into northeastern North America as they are potential finds for us at the end of the road. When Dave Brown called me at 08:55 Thursday 14 Nov 2013 I was just warming up to a computer screen in an office. No words were wasted as he conveyed to me he was glimpsing a grayish warbler with bright yellow undertail coverts behind an apple tree. We both knew what he was talking about without spelling it out.  I screamed across town getting there in 15 minutes flat. By now Dave had seen more of the bird and was sure enough about the identity of the bird to sound the general alarm that there was a VIRGINIA’S WARBLER on the dirt track behind the Country Ribbon chicken processing plant in Pleasantville. The rest is history but not an easy one.


It is 19 Nov as I type. The bird has been very difficult to see and the most challenging long staying Newfoundland rarity ever to photograph. Birding the hillside of brush, fields and weeds checking out the flocks of juncos and chickadees is futile.  It was soon realized that a leafy apple tree growing against the cinder block wall of the chicken processing plant was a semi-regular part of its daily routine. The apple tree became the worship site of birders for hours upon hours waiting for a sighting of the Virginia's Warbler or a lucky angle for a photograph. 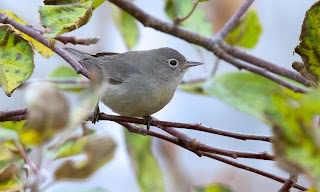 Perfectly gray and boring for a warbler, the yellow wrap around rump patch is concealed in this and most views. The gray Nashville Warbler-like appearance excites rare warbler hunters in eastern North America.. 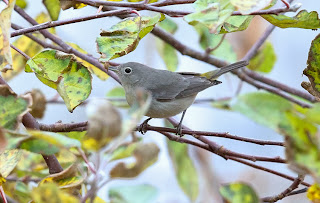 Many hours were spent standing by the famous apple tree with the camera, yet I ended up with combined time of maybe 12 whole seconds of  viewing the bird down the barrel of a telephoto lense.  The bird was usually buried behind a maze of gnarly branches. 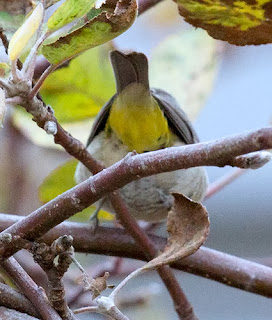 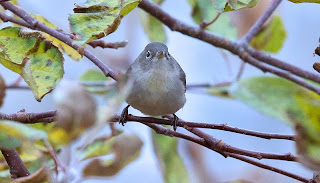 A hint of the yellow in the centre of the breast is just visible on this view of the bird but there was never time to notice this detail in life observations. 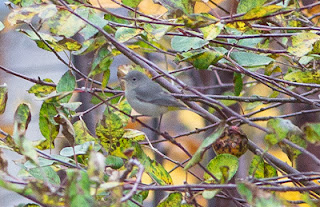 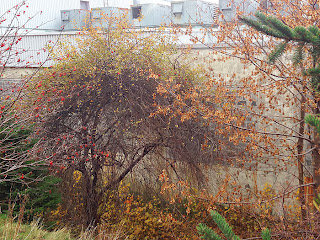 Posted by Bruce Mactavish at 18:45