On 25 Sept 2013 Dave Brown and I relocated a Yellow-throated Vireo found five days earlier by Dave and Jared Clarke in an alder lined gravel pit at Bear Cove, Avalon Peninsula, NF.  A Yellow-throated Vireo looks stunning in the Newfoundland alders. It is a less than annual semi-regular fall vagrant.  The bird was travelling with a Warbling Vireo (also rare, a few per autumn) and a Red-eyed Vireo.  We were getting quite a few looks at the bird.  Photo opts were above average for this usually briefly seen species.  However, the photographing conditions were abysmal - dark heavy overcast, drizzle and fog.  Even setting the camera at ISO 2000 I was getting only 1/160 second shutter speed. But that was all it took when hand holding a 300f4 lens. Distances were also rather great.  The result are some heavily cropped, highly grainy shots that with a little Photoshop love came out as OK record shots of  the beautiful Yellow-throated Vireo in Newfoundland. 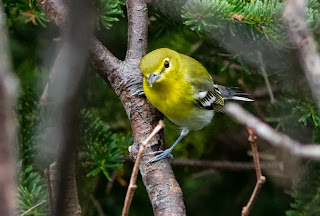 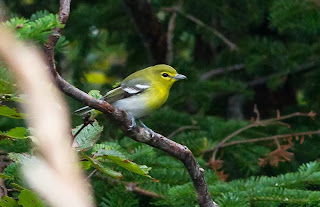 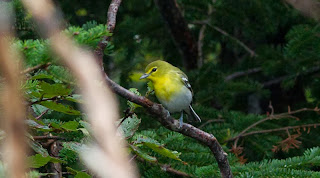 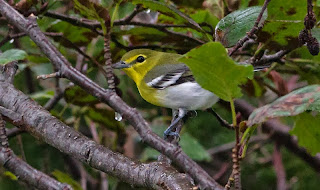 Posted by Bruce Mactavish at 08:05