After 14 days in Nunavut in late winter and basically deprived of birds I am looking forward to going back south to Newfoundland where there are birds.  Even ordinary birds like starlings and crows will look interesting for a few moments. In the last two weeks I've seen two species - ravens are common around the communities and Black Guillemots (little white dots) , a few from a survey airplane. The weather systems over the North Atlantic for the past week or more have looked fantastic for carrying birds from Europe to Newfoundland. It is on the early side but we've had Euro Oystercatcher as early as April 3 and Euro Golden Plover as early as April 8.  Looking at spring arrivals in Iceland for late March there are some interesting possibilities for this time of year - Greylag Goose and Whooper Swan being up there on the dream list.  Hoping to get a few days off work to look around for Icelandic vagrants. 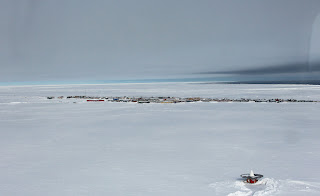 Looking east at the community of Hall Beach located at the NW corner of Foxe Basin while taking off from airstrip in a Twin Otter.  Foxe Basin is the body of water between the west side of Baffin Island and the mainland.  All the area behind the town is saltwater (mainly ice covered) and in the foreground the flat level terrain streches forever into the western horizon on the other side of me.  March 29, 2013. 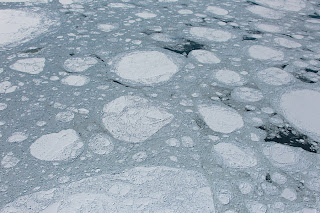 Foxe Basin on March 30, 2013.  Parts of the Basin are strongly tidal with continually moving ice where there are always small areas of open water harbouring a few Black Guillemots even in the depth of winter but as far as I could tell no other birds.

Posted by Bruce Mactavish at 08:01