October is an exciting month to be birding on the Avalon Peninsula, Newfoundland. Being at the end of the road for vagrants flying west they have to stop here or face endless Atlantic Ocean. Weather systems are all important for making it happen. The shortage of SW winds in September and October had a negative impact on the number of vagrants, especially southern warblers.  However, the show went on. Vagrants did happen. And there was a significant fast moving weather system  with  powerful far reaching SW winds that did bring a mini wave of goodies 2-5 Oct.  A couple of clear nights with calm winds took care of most of those birds. We presume they try to correct their navigational error and attempt to go back to where they should be on that date in time. In chronological order here are some highlights by photos. 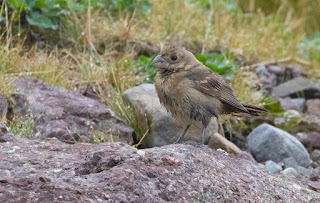 This wet Blue Grosbeak at Cape Spear on 2 Oct was the first sign that something had happened after a 1 October weather system. It stayed and week and was viewed by all. 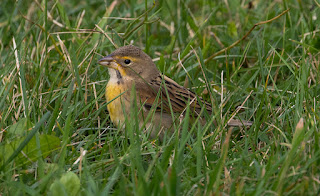 Dickcissels are a part of every fall on the Avalon Peninsula. This one was at Cape Race on 4 Oct. 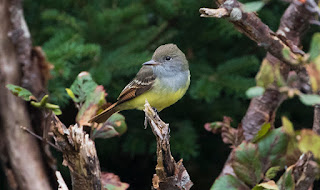 The species of the month was Great Crested Flycatcher. One on 4 October at Cappahayden turned into THREE the next day. It occurs about once every three or four years in the province.  I had seen only two previously and those being late 1980s and early 1990s. It was the headliner of the early October event. 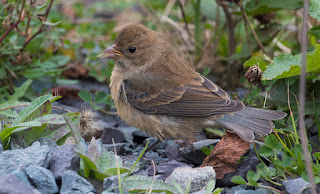 A few Indigo Buntings are a standard part of each October.  This tame bird was on Bear Cover Point road on 5 October. 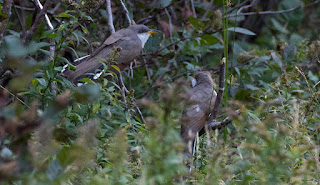 A handful of Yellow-billed Cuckoos were part of the early October event. Seeing two together was an unusual event on Bear Cover Point road on 5 October. 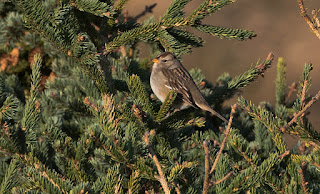 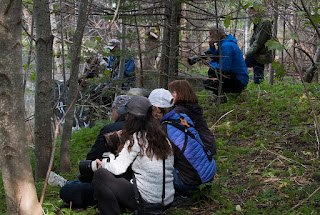 A group of patient birders waiting for a rare male Black-throated Blue Warbler to show itself at Kelly's Brook in St John's. 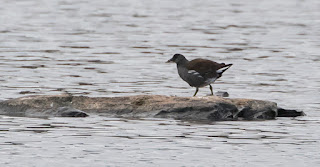 Common Gallinule is a pretty rare bird in the province. This bird showed up at Mundy Pond, St John's a week after a long staying individual at Virginia Lake (5 km away) disappeared.  Coincidence?  Probably not. 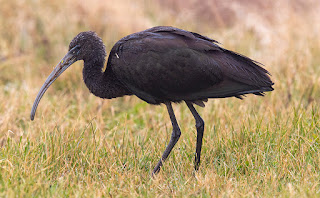 Somewhere between three and five different Glossy Ibis circuited the Avalon Peninsula during October. This one was at Cape Race on 17 October. 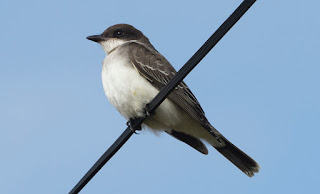 A kingbird on the 23rd October at Renews had to be a record late Eastern Kingbird. Of all the other possible kingbirds out there straying around eastern North America at the time! 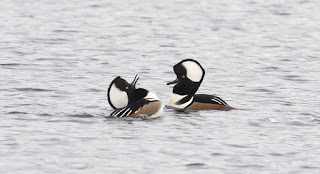 Hooded Merganser is not rare but scarce.  Most Avalon birds are females. These two males attracted a lot of attention while feeding at Kenny's Pond St. John's. 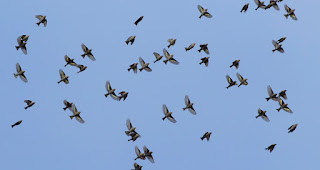 Pine Siskin migrating on the coast of the Avalon were but part of a massive eastern North American event. 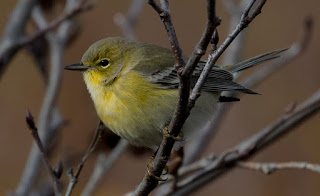 A Pine Warbler on 31 October at Renews was only the second individual of the autumn up to that point.
It is 3 November as I type.  I might be waiting for a certain epic event to unfold on American TV! What ever happens in THAT event it won't affect the vagrants that await us during November when the really rare ones can happen.
Posted by Bruce Mactavish at 16:02