Alison Mews knows how to destroy a days work at the office.  It was close to 10:30 am when she sent a text with a picture. How much can go through one's mind in a full second? It would be interesting to have brain scan when news of FORK-TAILED FLYCATCHER that you could see has just been found. Alison was on a non-birding holiday with husband Paul and some friends to Bonavista.  Just because it is a non birding holiday it doesn't mean you turn off the birding radar while you pretend to be a civilian for a while. Even the non-birders in the group thought the FORK-TAILED FLYCATCHER was a pretty snazzy bird.

Ken Knowles was ready and could meet me in the office parking lot in 30 minutes. We were gone on the 640 km round trip 45 minutes after hearing about the bird.

It was not a shoe-in.  There were tense moments when we found out the wind had changed from a hot SW wind to a cool and foggy north wind just before we got there. I talked to a lady who worked in the tourist trade at the famous Bonavista lighthouse. She said it was there just an hour ago on the fence. It would fly up and catch a fly and then come back to the fence.  We expanded around search zone after scouring the lighthouse buildings. I ran into Brenda Taylor (Jon Joys other half) guiding a couple of tourists.  She had good news. The flycatcher was down the road by that patch of tree when she came back from lunch.  THAT IS WHERE WE FOUND It!!!  For the next 90 minutes we followed the bird around.  It ended up going back to the fence behind the right most building where Alison first saw it. 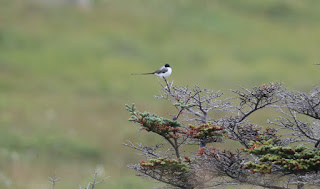 The first shot. Just in case it vanished never to be seen again in the next second I took a long shot when we first located the Fork-tailed Flycatcher. 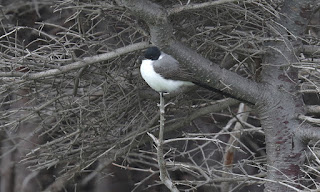 It sat for a while here in the complete shelter from the wind before getting active and began feeding again. 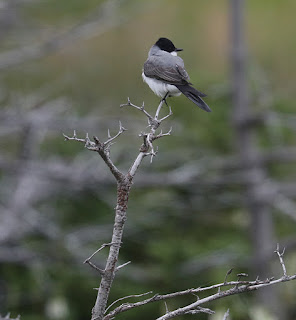 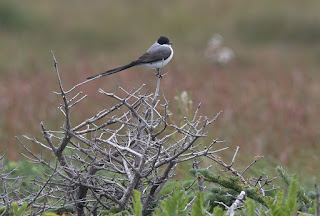 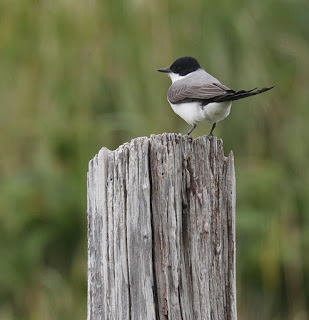 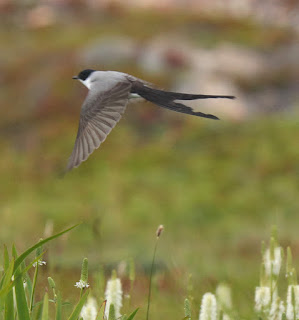 The bird moved around a good bit. It was interesting to watch its big swooping undulating flight as it moved from perch to perch. It really is a fast flier. 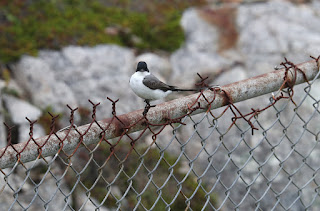 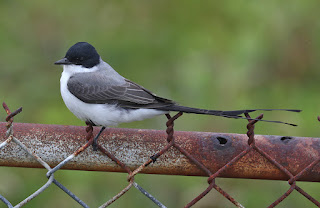 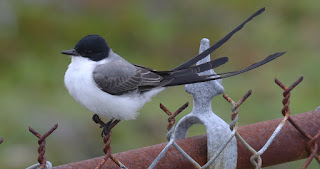 The bird must be an adult because it seems to be holding worn outer tail feathers while growing in a new tail.  Yellow crown feathers were sometimes visible when the wind ruffled its thick feathered head but I didn't read anything in the literature that this would indicate the sex of this bird. 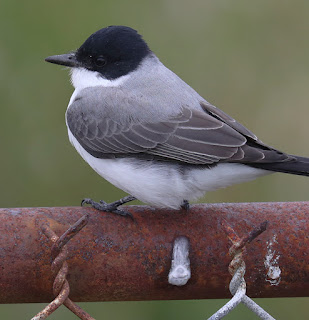 It let loose a couple times indicating it was feeding well.  Even the most elegant have to go. 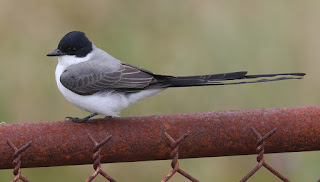 How do you make a rusty  chain link fence look good. Just add one Fork-tailed Flycatcher.

Posted by Bruce Mactavish at 19:05