One Last Kick at the Avalon Shearwaters

I heard there were still big numbers of birds and whales feeding in the Witless Bay Ecological Reserve. Not just the local breeding puffins, murres, kittiwakes but also shearwaters.  The shearwaters do not always come into Witless Bay area to feed on the capelin but this was a different kind of year. On a whim I decided I needed one last crack at photographing shearwaters. The weather was going to be near perfect with very light winds and an overcast sky on Wednesday morning.  I called the Molly Bawn Whale and Puffin tours at Mobile. They had space. They have a nice small boat that makes you feel intimate with the birds and whales.

There were masses of birds and whales. It was a spectacle of life. No one could not be in awe of the sheer volume of life and activity. There were large numbers of Common Murres and Atlantic Puffins on the water resting in rafts or diving for capelin. Humpback whales were everywhere.  And the shearwaters? They were present in the low hundreds mostly resting in small rafts or singly. Today Greats outnumbered Sootys. And there were a few Manx.

Great Shearwaters living around the eastern side of the Avalon Peninsula have been well fed this summer. 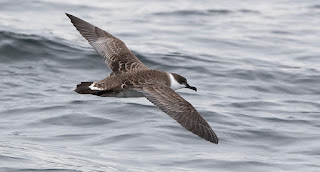 The adults are completing their wing and tail moults and looking more like full shearwaters compared to their mid summer grunge look. 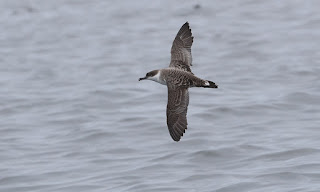 This one will be looking complete in a week or so. 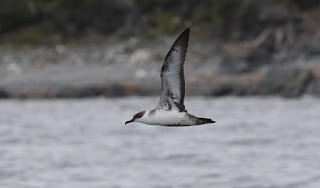 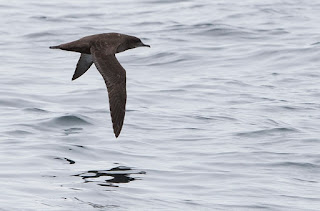 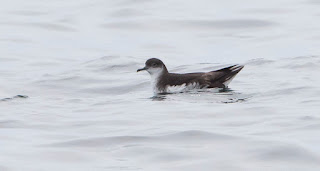 There were several sightings of Manx Shearwater. Typically when first detected they were already flying away or never came close at all. This was a large crop. 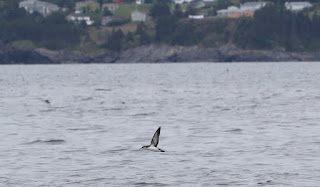 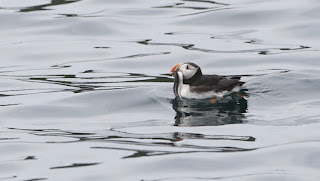 There were many opportunities for photos of the puffins.  Some of the boat participants (from Florida & New York)  were seeing them for the first time.

Hiding and not hiding behind a wave. 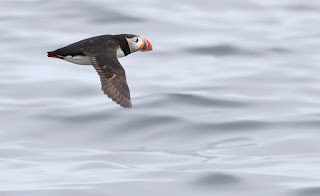 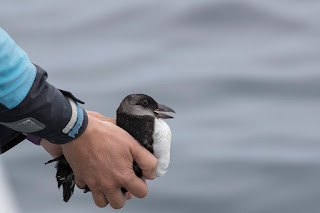 The juvenile puffins have been fledging for the last week during the night.  They are programmed to fly alone out to sea under the cover of darkness.  Some are attracted to the street lights in Witless Bay and Bay Bulls and crash land on roads and lawns. An organized puffin patrols rescues the stranded bird during the night.  Some of them were giving to our tour boat to be released out to sea. 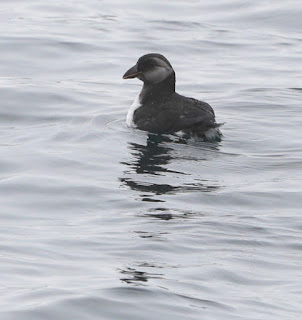 Once taken out of the rehab boxed and handled by humans they quickly regain their dignity once on the water and start swimming out to sea. They are vulnerable to Great Black-backed Gull predation at this age. This is why despite the thousands of juvenile puffins fledging every night during mid August you do not seeing any around the nesting islands during day light. They have flown due east in the darkness and by dawn are well out to sea away from their natal islands. 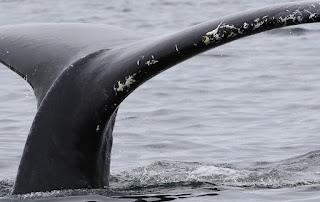 Even for those saturated with seeing whales this summer the experience on the Molly Bawn was exceptional. When they turned off the engine with whales and birds all around, the huge sounds of the blows were all the more impressive.
Posted by Bruce Mactavish at 05:48