This afternoon, co-worker Tony Lang and I on work assignment to Marystown, Burin Peninsula found ourselves distracted by shorebirding at nearby (only 30 km beyond Marystown) Frenchmens Cove.  I was pleased to see my first Semipalmated Plovers of the season and plus a good dose of adult Least Sandpipers and the usual Greater Yellowlegs, one Lesser Legs and a semi rare Willet. Across the heat shimmering sand flats I had my eye on a Semi Plover of considerable interest.  For sure all I could see through the distorted air a heavy breast band and I thought I was seeing a long distinct white line on the head behind the eye.  These two features are Step One on the way toward a possible Common Ringed Plover.

We moved in with  our scopes.  Views were pretty good through the scopes but all photos were somewhat distant and affected by heat distortion over the sand.  The distinct head markings contrasting distinctly from adjacent feathering was in favour of Common Ringed Plover. The dark areas on the head of Semipalmated Plovers tend to blend with adjacent areas of different colour.

The orbital ring colour is an important distinction between the two cousin plovers.  Scope views of eye were microscopic at up to 50X.  There was a dim white-ish colour to the orbital ring on the lower side of the eye but nothing on the upper side of the orbital ring. I think this still sits inside the Common Ringed Plover comfort zone as some adult males in high breeding plumage have a complete narrow yellow orbital ring. Usually the area around the eye looked dark even in the bright light while the yellow orbital of the half dozen Semipalmated Plovers were clearly outlined in yellow.

As you look through these photos processed on a poor laptop in a Marystown hotel, note the details around the head plus the wide breast band. The light created strong contrast and dulled the subtle brown colours of the back.  It should be noted that theRinged Plover was a shade heavier than the other plovers.


24 hours later. Saw the bird again today. A shorter encounter but less harsh light made for nice scope views. Only photos today were some flight shots which show some detail on wing stripe being wider than Semipalmated Plover as it should be.  It looked excellent for Common Ringed Plover today. It felt right. It is solid.   Photos added to the end of this posting.. 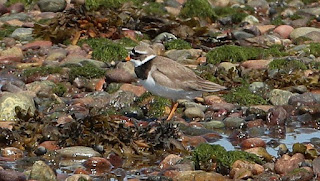 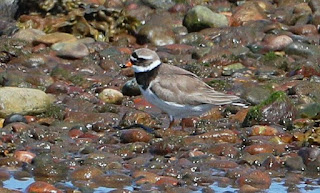 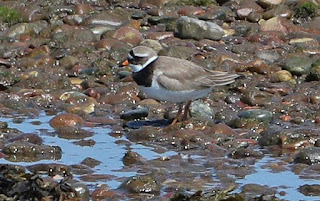 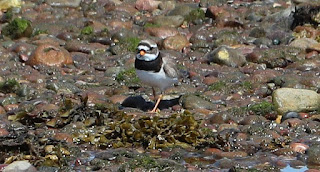 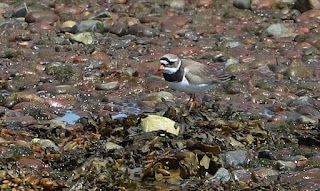 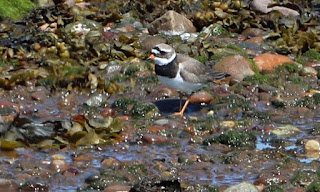 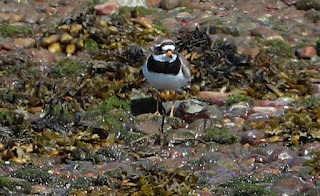 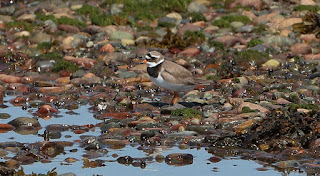 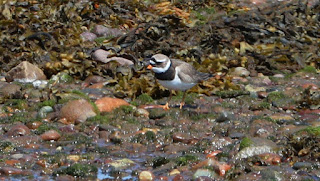 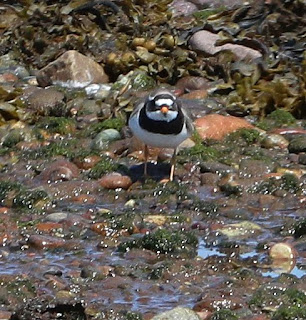 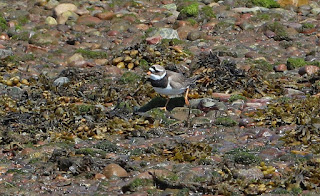 Flight shots. July 11, 2017  Common Ringed Plovers have a more extensive white wing stripe than Semipalmated Plover. The lighting and angle of wing makes comparison tricky.  Comparing the size of the area in white on each individual primary feather reveals the larger amount of white on the Common Ringed Plover (in the lead).  The wider white bar on secondaries is at least suggestive in these photos. 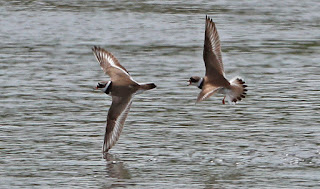 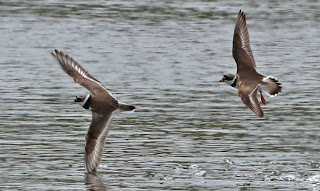 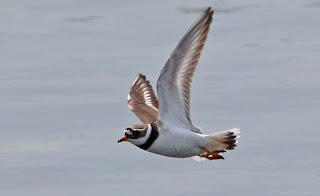 Posted by Bruce Mactavish at 18:55