27 Years (to the hour) between HERMIT WARBLERS.

Newfoundland should not even have HERMIT WARBLER on it's list. The first was at Blackhead, Avalon Peninsula 11-13 Nov 1989 was thought of as a once in a life time, or once ever for all time, occurrence.  I remember the day clearly as I was birding on Waterford Bridge Road when John Pratt found me in his car and said to me " I think you want to be a Blackhead right now".  John Wells had just found the unthinkable Hermit Warbler.  The rest was history. This was before computers, well before email, well before digital photography - yet we managed to get full frame slide images of that bird nailing the proof to the cross for eternity.  It was a pure Hermit with an all gray back and no yellow or streaking on breast.

Every November 11 I reminisce about that day in 1989. It was only one of the great birds that we have for the 11 November holiday - the other significant species being a WOOD SANDPIER at Renews 11-13 Nov about 1996?  As fate would have it on 11 Nov 2016 I was again looking for lingering mega waifs on Waterford Bridge road when Lancy Cheng texted me (imagine what we would have thought of being texted in 1989!) saying that he and Andrea Dicks had seen a Spotted Sandpiper at Mobile.  This was seriously late for Spotted Sandpiper. I recalled the Wood Sandpiper. There was no obvious weather system to explain its occurrence. Could this be a Common Sandpiper?  Without hesitation my new objective was to get to Mobile NOW. Went home for the scope and extra photo gear.  Got to the scene in under 50 minutes from Lancy's call.  I spotted the bird way the hell down the shore well beyond the end of the road.  I found a trail that lead part along the coast. Hanging by one arm from a tree on a steep slippery slope managed some not bad photos. The overall feel was Spotted Sandpiper and it has since been confirmed by Europeans as Spotted Sandpiper. Still this an exceptionally late and perfectly healthy looking Spotted Sandpiper.

On the way back down the trail toward the car I came across a flock of chickadees and juncos. This is what we clue into in the fall for lingering warbler waifs.  Bang a Warbler flew in. High in a Larch.  White underneath. White tail spots.  Two thick white wing bars. Then I saw the black eye centred in a light bulb of yellow. IT WAS A HERMIT WARBLER.....

The alarms were sent from iPhone in the woods.  It was not seen again that day. Next day. After a struggle it was refound on nearby Cod Seine Road by Andrea Dicks.  In the end some 15 people saw it in that area. It took hours for most people get their glimpse.  Photo opts were near impossible. But it was indeed a Hermit Warbler. John Wells, Ken Knowles, Chris Brown and myself were the only people present that had also seen the 1989 bird.

Attached are the barely record shots of the bird which seems to be a male. The back was gray. No stripes or yellow on breast so not a hybrid with Townsend's Warbler. But speaking of the devil.  There was a Townsend's Warbler in a back yard on Gander Crescent, St John's since 10 Nov. Well not present since then, seen once per day since then.  I lucked into seeing the bird at 3 pm today. So my day list of warblers being just two species was Hermit and Townsend's.  I tried for a hat trick of western warblers looking in the Graveyard down my street where the last Black-throated Gray Warbler in Newfoundland was seen in Dec 1991.

Maybe tomorrow. There is a good buzz in the air. 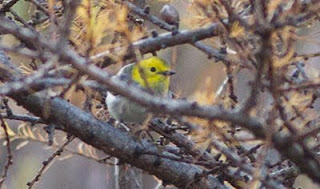 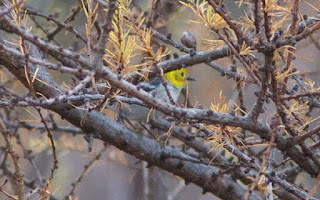 Photo hints at the gray back and  wing bars more prominent than cousin Black-throated Green or Townsend's Warblers. 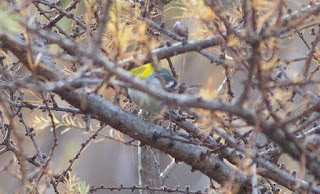 Lack of stripes or yellow wash on breast and more clues about the gray back colour are shown in this photo.  Not much in the way of photos but they confirm the species. Personally I enjoyed few seconds of superb views of the whole bird mostly unobstructed by branches. The intensity of the yellow-green face was impressive. Everyone remarked on that.  It was a stonker. 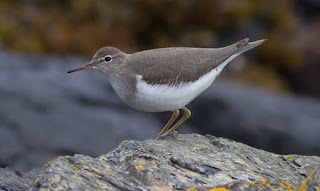 The extraordinarily late Spotted Sandpiper that resulted in the Hermit Warbler being revealed to the world. 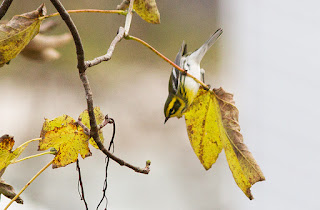 Townsend's Warblers are but a year-bird in Newfoundland. This bird represents the 20th or so provincial record - 2nd in Autumn 2016. 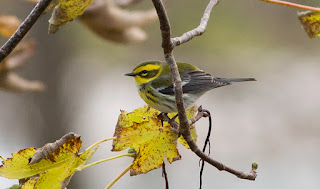 Would not be surprised if another one of these was found tomorrow.

Posted by Bruce Mactavish at 18:00