On 18 August I checked the gulls on the ball fields at QV Lake looking for Yellow-legged Gulls as they regularly arrive during the third week of August. I actually saw very suspicious looking bird but due to bright sunlight and gulls being flushed by a dog walker and shortage of time on the way to work I left it. Wasn't sure of the shade and actual colour of mantle. I didn't get a photo. There weren't any gulls on the fields next morning before work and... well it didn't matter anymore because later the same morning was the discovery of the White-winged Tern which changed everyone's focus for days!

Alvan Buckley making the rounds on Sunday 23 Aug independently discovered the same bird. He sent around a few photos confirming this.  It did look like a good candidate for YLGU.  On Monday morning there were gulls present at the ball fields but not the gull of interest. Tuesday morning (today), Alvan located the gull in the ball fields.  Got some pictures and texted me.  I got there at 08:40. found the bird right away among the 300+ gulls present. Started taking pictures through chain fence.  A grounds-man was about to do some work on the field so I got out of the car ready for a flight shot.  Oddly the gulls didn't even fly at first.  Eventually only half the birds flew up but went to just the next field.  Dull foggy conditions meant slow shutter speeds, bad for flight shots. However, the bird looks right on for a YELLOW-LEGGED GULL. It is difficult to convey the little details that add up to right feeling you get when you have a genuine YLGU especially when these details are subdued during heavy moult.  A pale  Lesser Black-backed Gull or a hybrid LBBGx HERG are the ID challengers.  I won't even try to go through all the details now. The bird is a mess now but will gradually start looking better. Typically August arrivals linger and are regularly seen until at least November and if lucky it will overwinter.

Attached are some snaps from this morning. Take them as you will. Expect better pictures over the coming weeks or months. 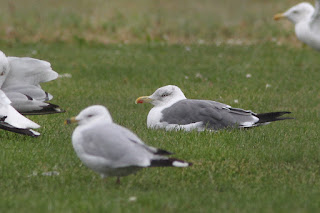 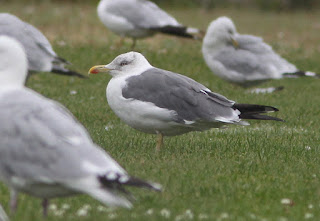 Head streaking restricted to forward part of head with a mainly white nape is classic YLGU. most of the HERGs don't have any head streaking yet. 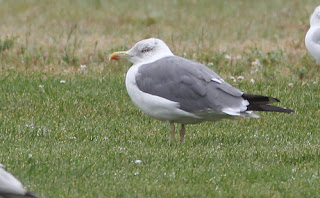 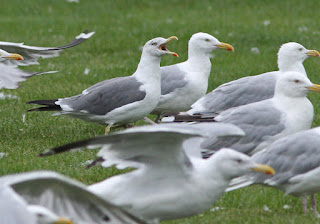 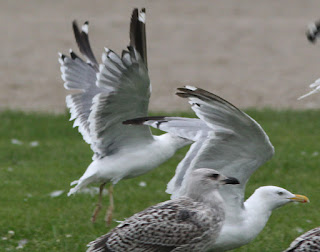 (YLGU in the back) Just two unmoulted primaries. The majority of HERGs (in front) with several old primaries at this time. 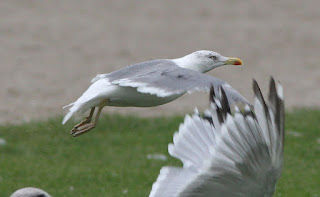 Out stretched head and neck shows the mean/tough look of a YLGU that is often lacking when the bird is relaxed. 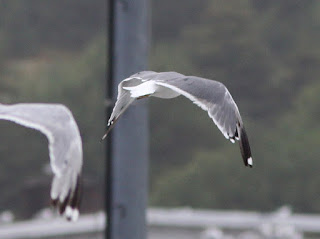 An indication of how the  black wingtip pattern will look like when finished moulting - sharply demarcated from rest of wing from below and above.