The coffee I bought on the way into work was left on the office desk unopened for four hours all because of a phone call.  At 09:10 Paul Linegar phoned all out of breath.  White-winged Black Tern at the Manuels yacht club he breathed.  His excitement was real but how could he be so certain since in the post breeding plumages of White-winged Tern are very similar to Black Tern which is also rare, not even of annual occurrence in Newfoundland? He said he was using an old Petersen guide he found on the boat he was on as he left the yacht club with a friend.  I asked a few questions about head details from what I could remember on the finer points required to clinch the identity of a fall White-winged Tern.  As the phone connection broke up he conceded that maybe he was not sure of the head details.

I didn't want to sound off a false alarm on a White-winged Term to the public domain so I phoned a Ken Knowles and a John Wells and told them about a tern, maybe a Black Tern but Paul thought it was White-winged Tern.  Twenty minutes later I was on the scene looking for a Black Tern.  Not much to see but a few Common Terns and gulls on the gravel bar.  Ken, John and Anne Hughes arrived. We looked around seeing nothing. Then a small group of tern flushed from way down the beach.  I saw one with a black body, so it seemed. Then it reared up and I saw the BLACK UNDER WING COVERTS. John saw it too. It was instantaneous euphoria that changed the rest of the day for every birder on the northeast Avalon.  Paul had forgotten to mention the bird was still in breeding plumage!  It was a stunning near full breeding plumage WHITE-WINGED TERN, First for Newfoundland. 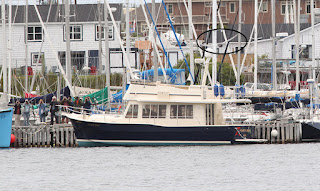 The first responders to the scene of the WHITE-WINGED TERN getting their first looks in flight from the  Manuels yacht club. 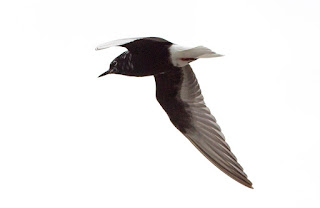 The WHITE-WINGED TERN left the yacht club flying directly over my head.  Note the patented black under wing coverts. They are whitish on a Black Tern. The white flecking around the head and neck show that it was starting to loose the breeding plumage. I am pretty sure the date is late for a North American  Black Tern to be in mostly breeding plumage. Wonder if it is an unusually late date for a WHITE-WINGED TERN in this plumage? 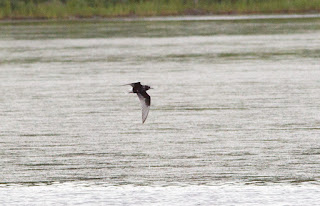 Eventually we figured out the WHITE-WINGED TERN was feeding just two minutes north of the yacht club at Chamberlain's Pond.  It would feed on flies on the surface of the pond for 10-30 minutes then head back to the gravel bar at the yacht club to rest and preen. The bird was still not close and the background of houses and trees distracted the AF systems on the cameras. Below are a few keepers out of hundreds of misses.  Even these are big crops. The photos are never good enough to satisfy a rare bird photographer. But hey, this bird is a keeper no matter the photo quality. Could have easily gone a life time without seeing a WHITE-WINGED TERN in Newfoundland.  It was a very beautiful bird with the rarity status and overall sum of quality approaching the value of the April 2014 Ross's Gull at Torbay. Maybe tomorrow for the million in one photo. 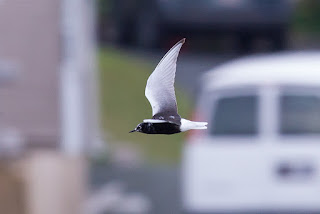 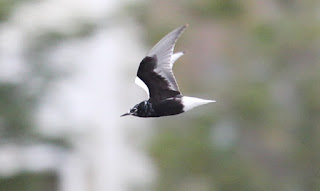 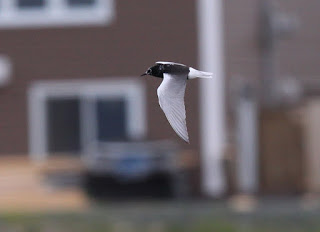 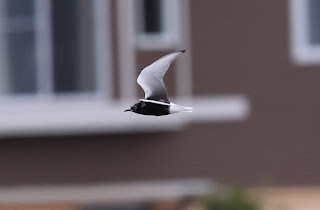