On 8 August 2015 as John Wells, Ken Knowles and I were cruising through the community of St. Mary's checking out the usual birding points and were surprised to see three Barn Swallows flying overhead on Road X.  August is a poor month for Barn Swallow records. Most Newfoundland records occur during the spring and fall migration periods, May-June and Sept-Oct. We carried on with our day.  A weekend later on 16 Aug I found myself on the same Road X in St. Mary's with those swallows still flying overhead. Lingering Barn Swallows in August rang every alarm bell. There were now five Barn Swallows, three with full adult long tails and two with short tails like one-year old or perhaps juveniles. Against the bright white sky it was difficult to see details of the plumage. Impatiently I walked over to the closest building which as it turned out was not being used and BINGO there was a Barn Swallow nest over the door light shade. There were the arses of two nearly fledged young pointing in my direction.  I didn't want to cause a premature flush of the young birds so hung back.  I got the camera out of the car and got theses snaps. 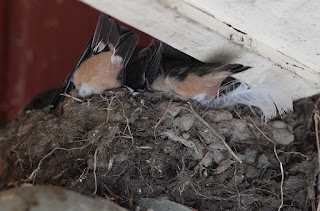 The arses of two not yet fledged Barn Swallows on a nest at St. Mary's is quite a rare sighting in the province of Newfoundland and Labrador. 16 August 2015 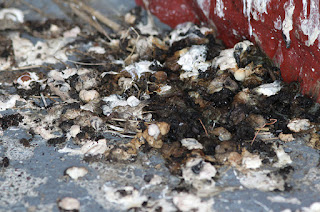 On a family outing aboard one of the Witless Bay Ecological Reserves tour boats on 15 August I noted an encouraging abundance of nearly fledged kittiwakes on the cliffs.  Hopefully the parent birds were still able to find a food supply good enough to finish off the rearing of the young even after the spawning capelin moved offshore. 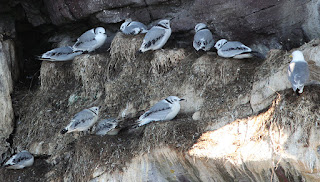 Lots of nearly fledged kittiwakes sat on the nests at Gull Island. Witless Bay Ecological Reserve on the latish date of 15 August. 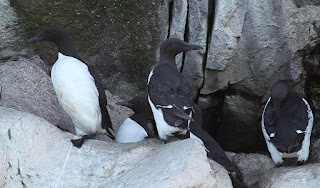 There were plenty of Common Murres standing around doing 'nothing'. 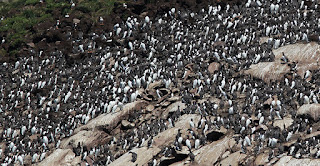 I could hear the familiar cries of young murres from within this mass of murres on Gull Island but could not see any of the fluff balls.  Seems late in the summer for this many murres to still be massed on the breeding site. Not sure if there is a significance to this or if it is my ignorance of the breeding chronology of Gull Island Common Murres.

Posted by Bruce Mactavish at 17:43