Rain Rain and not an Ivory Gull in Sight.

The Ivory Gull dreams have been put on hold for the time being. There was the one adult a Quidi Vidi Lake on Feb 27 found by Lisa de Leon and a 1st winter found by Ian Jones at Topsail Beach, Conception Bay and seen by only two others (Jared Clarke & Dave Fifield) despite a dozen people looking for it. The winds in the forecast petered out to light although still from the NE.  Lots of rain for today and the next three days  as three Low pressure areas blocked from going farther east by a High pressure zone anchored south of Iceland merge into a weakening and confused mess. The general NE airflow will continue and keep the ice concentrated along the eastern shoreline of Newfoundland. It will take stronger winds before we see the ice down to the Avalon.

Consolation for the photography minded has been a confiding adult Peregrine Falcon that has made home the tall poplar type trees on the north side of Quidi Vidi Lake for the last week.  Instead of a cliff, it is using the trees for a place to pluck starlings and rest during the rain.   Don't want to miss this unusual opportunity to photograph this beautiful bird. On Friday I was there with my little 300 f4 lens.  Got these shots.  Hoping to show the bird a 500 mm lens before the weekend is up. 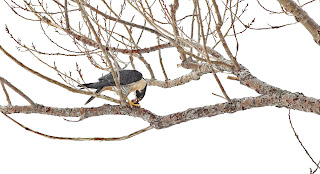 The Peregrine Falcon eating a starling in its favoured tree on the north side of Quidi Vidi Lake on March 1. 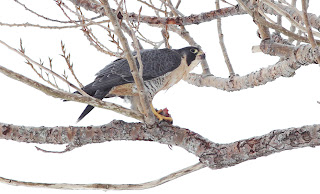 The Peregrine taking a look around at the crows between bites of tender fresh caught St. John's starling. 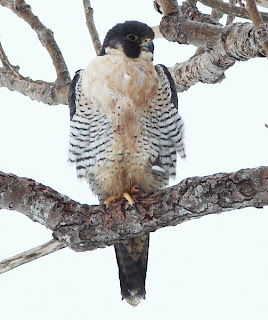 Content while digesting starling the Peregrine feels safe even with the steady vehicle traffic on The Boulevard and people walking on the QV Lake trail.  This a big crop.
Posted by Bruce Mactavish at 12:43