Currently I am sitting in a 'hotel' room in Cape Dorset, Baffin Island. Cape Dorset is a community of <500 people at the southwest corner of Baffin Island. I am here for work doing aerial surveys for marine mammals in Foxe Basin. I was also here (based in Iqaluit & Cape Dorset) for three weeks in March 2012. It is still winter on Baffin Island in March with temperatures well below freezing all the time. All the snow that has fallen since fall the previous year is still on the ground in March on Baffin Island. From a birding point of view there are very few birds to see in southern Baffin Island in late winter. In a combined total of 27 days spent here from 2012/2013 during March based out of Iqaluit and Cape Dorset I have seen basically nothing but Common Ravens. These birds are common within the communities where they feed at dumps. But you don't see them when flying over land to our survey areas.

There is one exception to the raven-only rule. I did see one single Common Redpoll in late March 2012 flying over the buildings in Iqaluit. It indeed did look large and dark brown even with the in flight only view. Before coming to Baffin Island in March I'd hoped to see redpolls expecting them to be the big pale Hoaries and the big dark Commons. But once here I realized the place is completely inhospitable to any birds. Even ptarmigan are on the missing list. Hunters here say they are present but rarely see them in winter and don't consider them something to hunt.  I can not imagine Gyrfalcons, Snowy Owls or redpolls living here in winter.  Walking around Iqaluit and Cape Dorset I see no tips of willows or any grass sticking up through the snow.  Hill tops reveal bare rock with small amounts of lichen and nothing else. It is the same everywhere along the south coast of Baffin Island much of which I have seen from the air.  Maybe there are some lusher areas farther north on Baffin Island where redpolls and Gyrs might be able to eek out a living but it is difficult to imagine.
I am thinking practially all the redpolls that breed in Baffin Island have to leave for winter.  Gyrfalcons and Snowy Owl probably have to leave the land but they can live out on the ice where there are Dovekies, guillemots and murres to eat. The ice edges and open water areas between Baffin Island and Greenland potentially supports a good population of Gys in winter. Dovekie should be numerous somewhere out there in winter.  Many Gyrs certainly feed around the eastern edge of the ice off Labrador and northern Newfoundland where seabirds, especially Dovekie are likely to be common. 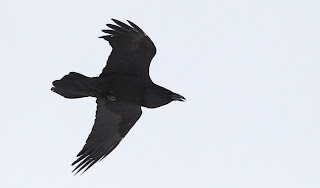 ﻿
Common Raven is the only bird expected around the communities of southern Baffin Island. They are common around the dumps where this bird was headed at Iqaluit on March 20, 2013 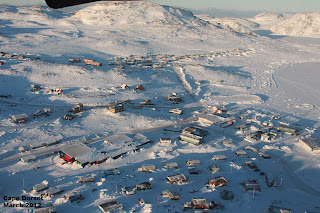 A aerial view of Cape Dorset, Baffin Island in late March 2012. The community is a raven oasis in an birdless Arctic landscape.
Posted by Bruce Mactavish at 18:11