On 10 Jan 2013 Alan Wormington of Ontario sent me some photos of a possible Tufted Duck from Hillman Marsh (near Pt Pelee).  My initial impressions were a duck not right for Tufted Duck (TUDU) and suspected it was Lesser Scaup x TUDU hybrid.  However, it got me wanting to know more about first year male TUDUs.  We have about 5 dozen Tufted Ducks wintering in St. John's and they are often easy to view well.  Today, 12th January, I did look at some TUDUs in town. At Burtons Pond, 47 of the 60-ish TUDU known to be in town were confined to a small pool water.  It was like shooting fish in a barrel.  The ducks were covered with water droplets from the heavy drizzle/light rain at the time.  After looking a little closer at our TUDUs I was 100% convinced the Ontario bird was not a TUDU and was probably a hybrid TUDUx Lesser Scaup. 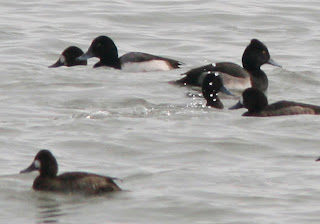 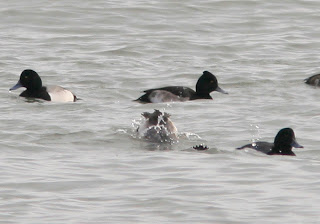 Two shots of the Ontario probable Lesser Scaup x Tufted Duck hybrid. The peaked head with a blunt crest lacking isolated strands of a new crest typically present on a Tufted Duck with an under developed crest is all evidence against pure TUDU. The brown wash on the flanks means it is not in full breeding plumage but on this bird not sure if it is a sub adult or adult. The solid blackish back means it has to be related to a TUDU or on the very outside chance Ring-necked Duck (not really a candidate because of crest and bill markings). 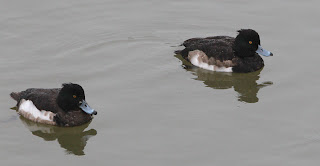 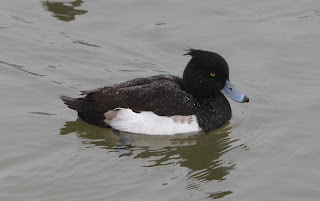 The above four photos are male TUDUs that are aged as 1st winters based on rudimentary crest and dirty white flanks.  Note subdued crests are limited to short loose strands with no prominent bump. Also note typical flat crowns. In the last photo the subadult is surrounded by three typical adult males with white flanks and with full crests that blown partially or completely from view.﻿ 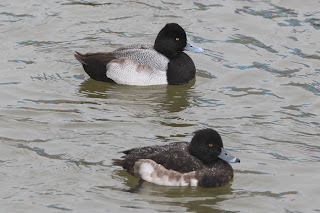 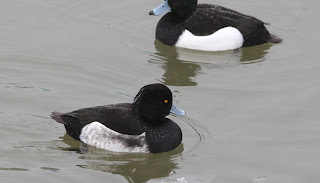 A male Tufted Duck. Probably an adult based on long crest that is somewhat matted against back of neck.  The brown washed sides probably means it was late moulting from summer eclipse into adult winter/breeding plumage. Adult male TUDUs in full breeding plumage have blacker backs then adults males in eclipse plumage and subadults. 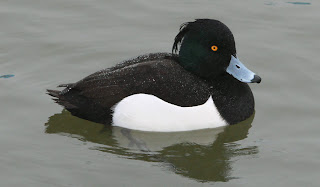 
Below is a female duck that had been with the Tufted Ducks all fall.  Others have noticed the unusual amount of white around the base of the bill and have already suggested a hybrid scaupxTUDU.  I have not really given this bird a good look until today thinking it was probably just a young female or  TUDU. It is late for immature TUDUs to be showing so much white at the base of the bill and this bird shows more white than any other TUDU I've seen.  The bird deserves more study but I am thinking the bold white around bill and apparently larger bill is leaning in favour of this being a scaupx TUDU hybrid.  The white ring around bill, I don't think it is significant enough to consider involvement with a Ring-necked Duck. I am betting female Lesser Scaup x TUDU at the moment but it is a weak bet.   Even the rear of he head looks too peak to be a pure Tufted Duck. 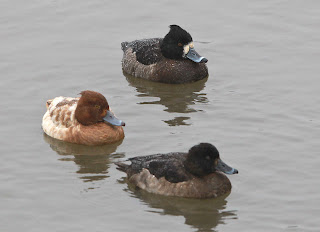 The possible hybrid TUDU is at the back. In front is the often observed leucistic female TUDU and a female (probable 1st winter) with hardly the beginnings of a crest.﻿ 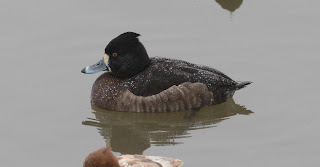 Profile of a potential scaup x TUDU hybrid.  Note high rear crown.  White around bill not so obvious from the side.﻿ 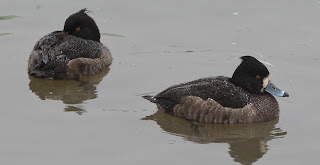 Strongly peaked crown and bold white ring around bill is just a little off the norm for female TUDU.  The female TUDU in background with weak crest might be a subadult.  ﻿

The possible hybrid duck  is in the upper left of photo with standard female TUDUs on right half of the frame.  Besides the obvious lack of white feathering around the base of the bill and only a vaguely pale zone inside black bill tip, all the birds have a similar shape.  The bill and head on the possible hybrid appear larger then the other ducks.﻿ 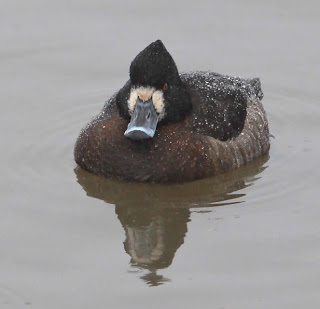 For those intimately familiar with TUDU there is something just a little off about this bird.﻿