The Yellow-breasted Chat that has been living at a couple of bird feeders on Roche Street in east St. John's has been viewed by more people than any other chat in Newfoundland. More people got this individual for their first Yellow-breasted Chat than other Newfoundland chat.  It has survived a two week period where the temperatures never reached the freezing point.  For a couple of consecutive days the high temperature was only -7C.  It survived nights of -13C.  Eve Roberts and Deanne Peters of Roche Street have been keepers of the chat providing it with a constant food source of suet, peanut butter, seed etc.  Didn't hear if it was seen today but it was looking strong yesterday (29 Jan) when I went to view it. It was only my second sighting out of 8 visits.  It keeps its chat attribute of staying out of sight whenever possible.  Attached are photos from 29 Jan. 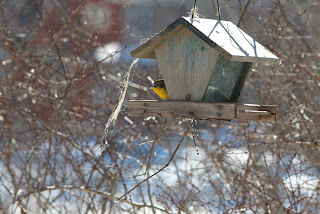 The Yellow-breasted Chat sampling a bit of white millet in this feeder. 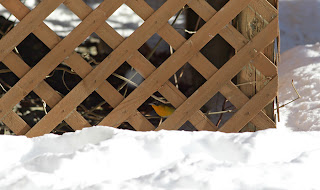 The chat has protection from hawks and cats behind the lattice around a back deck at both houses where it visits feeders. 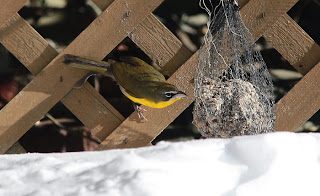 At this location all it had to do was partially emerge out of the cover and fill up on a special peanut butter, crushed nuts, ground raisin and suet mixture. 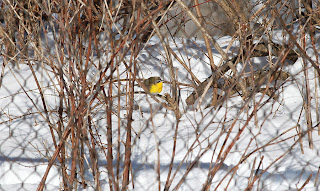 Here it is after it slipped away unnoticed to a bush in backyard five houses up the road.  It may have thought it was difficult to see in the depth of a shrub  Or maybe it was absorbing some sunlight on this day when the high temperature was only -7C.  It shone up like a light bulb in the bright January sun. 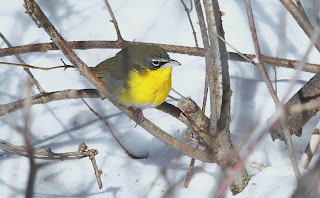 I walked up closer as it sat there behind a chain link fence.  In life the brilliant breast is almost orange in the centre.   The Yellow-breasted Chat is pure tropical in appearance.


In 2011 a chat in St. John's and another on the Burin Peninsula survived until mid February.  We are all pulling for this chat to be the first to get through the entire winter. Then what? It will have to migrate south in spring to find more of its own kind.  Pine Warbler and Yellow-rumped Warbler are the only two other species of warbler known to have successfully overwintered in the province.  An early April Orange-crowned Warbler in Renews a few years back was thought to have been more likely an over winterer than an early spring overshoot.

An impressive large and fast moving storm system will hit Newfoundland over the next 36 hours.  The far reaching southerly winds will be direct from Florida to Newfoundland for a while on Thursday.  A storm like this in April might bring us egrets and Indigo Buntings.  In mid winter there is not much migrating. HOWEVER!  There are a number of mid winter records of Purple Gallinule in Newfoundland and elsewhere in Atlantic Canada.  There are also records of mid winter influxes of Killdeer.  Something interesting could happen out of this.  Hah - for that matter,  geo-locater carrying Bermuda Petrels have been tracked coming into and leaving Newfoundland waters in late winter at such a high rate of travel they were thought to have been travelling around on tail winds produced in the intense Low pressure areas not near as crazy as the one about to descend on us. Dream on. 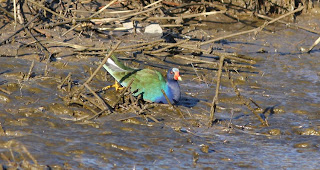 One of these Purple Gallinules would look pretty good in your driveway after the warm southerly blast on Thursday.  Call me if it happens!

Posted by Bruce Mactavish at 16:15