FIELDFARE in Reidville (near Deer Lake)

Word got out today about a FIELDFARE photographed on 19 Jan 2013 at Reidville in western Newfoundland near Deer Lake.  Gerard & Charlene Butler have seen the bird three times feeding in their apple tree since mid December.  Obviously this is no where near a stake out bird.  There are apparently a good number of other apple and fruiting trees in the overall area.  The home owners are going to bait their trees with sliced apples. We are waiting for the good news.


It has probably been ten years since there has been a Newfoundland Fieldfare.  It used to be more numerous then Redwing - by far. Now the status of the two species has been reversed.  Way back in Dec 1986/Jan 1987 up to four Fieldfares were seen together among the masses of robin flocks in St. John's. We don't know how many were present during that event. Those were the good old days.  Absence makes the lust grow stronger. Fingers crossed that the habits of this bird will be discovered and we can drive the 7 hours to Reidville. 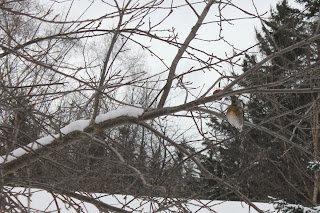 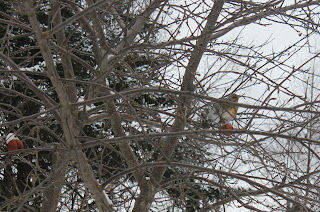 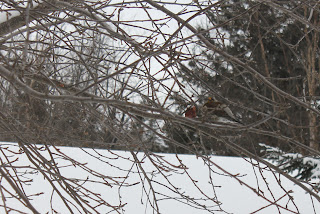 These killer photographs of a FIELDFARE were taken in Reidville, Newfoundland on 19 Jan 2013 by Gerard and Charlene Butler.
Posted by Bruce Mactavish at 10:45