With much anticipation I slept on & off through the night getting up hours before daylight to reach Cape Spear a birding destination only a 15 minute drive from home. A week of powerful northerly winds capped off with 36 hours of far reaching and intense NE wind drove the pack ice to the Avalon Peninsula in a way we have not seen for years.  Was it too late in the season for Ivory Gull?  In the past 30 year I can think of three times there have been Ivory Gull events on the Avalon in April. What about polar bear?  It used to happen more often than Ivory Gull in April yet while having seen all the April Ivory Gulls, I'd never seen a bear on the Avalon Peninsula.

The ice pack reached the Avalon on Friday. It was still off shore by sunset but overnight the 80-100 km.hr NE winds were sure to jam it against the shore.  I got to Cape Spear at 0700 Saturday morning. The driving snow was relatively light but it was full of ice pellets=ice bullets in the wind. I was prepared with full winter whiteout gear suitable for Baffin Island in January (who needs spring anyway!?) including professional grade snowmobile goggles. I decided to leave the scope in the trunk of the car because of the poor visibility and the tripod and scope catches a lot of air which is critical with these kinds of winds.

I always forget how strong a 100 km/hr wind is. You can hardly walk in it. Cape Spear being shaped like an airplane wing seems to exaggerate the force of the wind. I just managed to keep on my feet rounding the tip of the Cape to get to my shelter.

Perfect.  It was ice to my horizon (about 500 m), but seemed to be ice well beyond that. The ice was flowing south at break neck speed. Seals starting appearing to my left and disappearing to the my right. They were all this years young Harp Seals. Some still shedding the white coats of newborns.  These young seals, now on their own, were still not feeding themselves but relying on the fat given to them by their mothers. They were on the ice for the ride.  With the patchy white fluff of juvenile pelage the name given to them by sealers is raggedy jackets. Still very young, the bones are soft and make a juicy snack for a polar bear.  So tender and smooth you hardly have to chew the rich, savory flavourful dark meat.... (at least that what the polar bears tell me).  The new brightly furred seals having shed their white fluff are called beaters. I think because they have to beat their way back north once the ice melts and they get their 'swimming legs'.  These seals are gonna have a long swim to get back north when the ice melts this spring.

Birds were ordinary.  There was a fair passage of gulls flying toward St. John's for a feed.  Flocks of kittiwakes, probably local breeders, were also flying north.  I looked for black legs and inky black eye balls passing by in the snow but no such luck. I waited 2 hours and 15 minutes but no Ivory Gull today. That doesn't mean there aren't some around and  tomorrow is another day.

The highlight for me was getting a few snaps of raggedy jackets. I am not sure that I'd ever seen them in that state of 'moult'. It probably is present for only a couple weeks per years.  Below are some photos of the seals as they passed Cape Spear..... 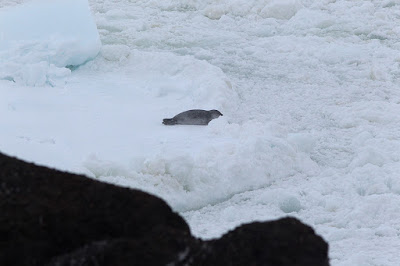 This young Harp Seal was one of 35 or so that passed close by the rocks at Cape Spear riding the pack ice driven by the Storm Force north winds and Labrador Current. 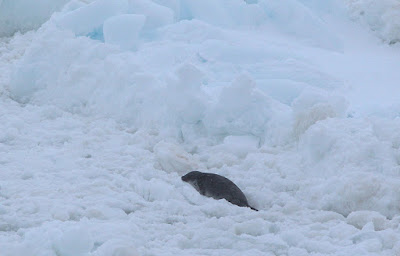 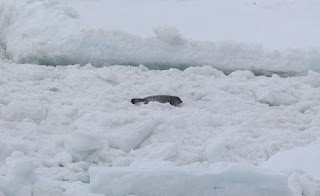 Small seals among big ice.  There is no place they'd rather be except maybe not so far south today. 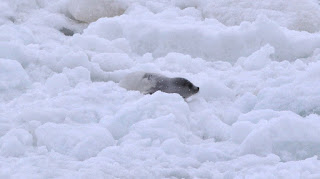 Like a snake shedding its skin the white coat Harp Seals acquire dark grey with scattered dark splotches. During this stage of its fur moult it is called a raggedy jacket. 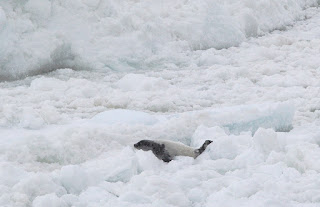 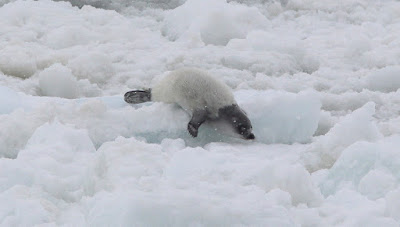 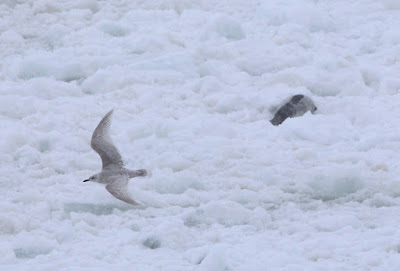 An Iceland Gull working its way against the wind passes by the raggedy jacket travelling with the will of the ice. 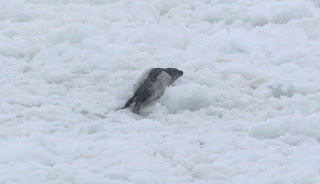 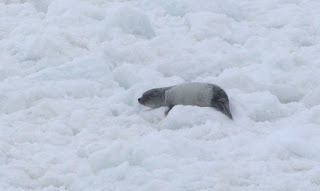 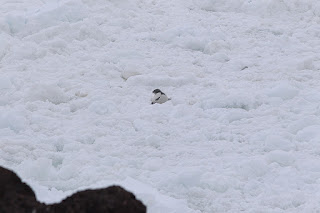 A reference point with the shoreline of Cape Spear and the raggedy jacket riding the ice southward. 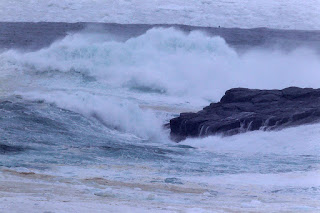 There were large rolling swells under the ice. Here at Flatrock the swells released from the pressure of the ice overhead explode in the open water around the Beamer at Flatrock. 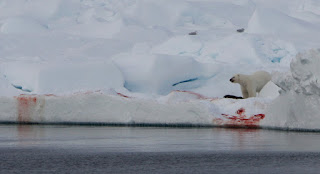 This scene I dreamed I could see at Cape Spear today but realistically was an extremely remote possibility.  This is a polar bear with a just killed hooded seal in NE Greenland - Sept 2010. 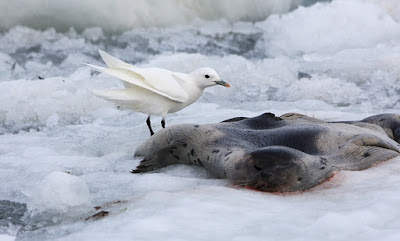 Posted by Bruce Mactavish at 16:57