Tis the Season of the Slaty backs.

On 23 November 2016 Lancy Cheng photographed an adult SLATY-BACKED GULL at Quidi Vidi Lake, St. John's, Newfoundland.  It was the first Slaty-backed Gull in St. John's in 4.8 years! And that after a stint of some seven consecutive winters from 2006 to 2012 with at least one Slaty-backed Gull to look for in the city. We are hoping Lancy's discovery will lead to another winter of Slaty-backed Gull watching and further inspire gull watching at The Lake.


This is how St. John's Slaty-backed Gull watching all started.  Way back on the 28th January 2006 two gull watchers with an appetite were scanning the gull flocks resting on the ice at The Lake (a.k.a. Quidi Vidi Lake, St. John's, Newfoundland).  I was standing by the penitentiary with a little bit of elevation so I could see all the gulls at the west end of the lake very well with a scope. There was plenty to look at and no where else to go on a Saturday morning so I stayed there for a good while soaking in the views.  Just as I was considering changing my point of view of the lake, a familiar little gray car pulled up on the snowy road below me.  It was Dave Brown, the other serious gull watcher on the lake that Saturday morning.

He got out of the car not even wearing his binoculars.  Right away I sensed something was up.  He scrambled up the snow bank to my perch and mumbled stuff only a gull watcher could interpret.

It was a perfect description of a Slaty-backed Gull, Our Ultimate Dream, but seen all too briefly before the gulls all flushed from his position by the Virginia River outlet, that Dave was not sure what he had seen was for real. Some of the gulls had flown down my way. What? I responded. You said it flew down this way. Well could this be the bird here that was suddenly now in my field of view swimming in the limited bit of open water!?"

It was a gull with a dark slate bluish-gray back a little different than the shade of gray of a hybrid or pure Lesser Black backed Gull. The head streaking was a beautiful smokey gray pattern in character with other Pacific Coast gulls namely the Mew Gull, Glaucous-winged Gull as well as Slaty-backed. The white band formed by the folded tertials looked quite wide, yes it was indeed beautifully wide and so white. The white tips to the primaries were substantial but not overly impressive. The bill size did not impress us.  This had to be a Slaty-backed Gull but we needed to see the colour of those legs to send in the catalyst to crystalize the impressions.  When it got up on the ice to preen and we saw the brilliant bubble-gum pink legs we were completely satisfied that we were looking at a bona fide SLATY-BACKED GULL.  At last!!!

The rest is history, an interesting and on going history. This began a seven consecutive winters (2006 to 2012) of Newfoundland Slaty-backed Gulls involving as many as 14 different individuals.  All were adult except for one 3rd winter bird. Birds were individually identified by wing tip patterns, winter head streaking and general size. Only one bird was thought to be a returning individual which was present for three winter 2006/2007 to 2008/2009.

Below is a list of all Slaty-backed Gulls observed on the island of Newfoundland. It should be noted that Vernon Buckle surprised us all by photographing an adult Slaty-backed Gull on the Labrador side of the Strait of Belle Isle at Forteau on 11 April 2016.

The Complete List of Slaty-backed Gulls for Insular Newfoundland ; compiled by Jared Clarke*

* Jared and I shared many of the initial discoveries and many intimate encounters with the St. John's Slaty-backed Gulls. This was back in the good old days when we could birdwatch freely at the St. John's dump all day every Sunday of the winter season. 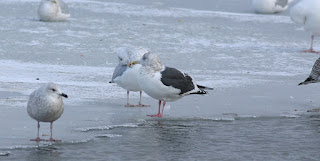 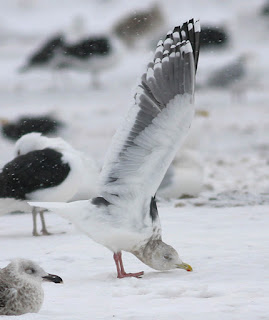 The same bird the next day when observed at the St. John's dump with the 'string of pearls' captured on both the upper side and underside.  This was back in the day when the Canon 10D and the 400 mm f5.6 lenses was the ultimate birder/photo combination. 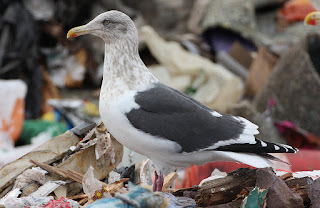 January 13, 2008. A large billed bird. Everyone's idea of a standard Slaty-backed Gull but in fact it was the most 'honking' sized individual of them all. 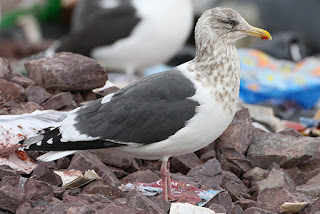 January 13, 2008.  This is a small billed Slaty-backed Gull. It was present all winter with the above bird, though never actually seen close enough to acknowledge each others presence. This bird was thought to be present for three consecutive winters - the only returning individual as far as we could tell. 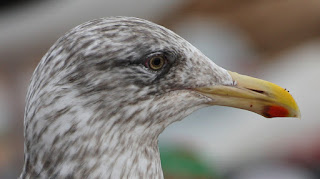 Some birds had clear staring eyes while this one had dark speckling in the iris. Same individual as above.  The pink orbital ring being consistent and one of the clinchers (if needed) to separate from hybrid Lesser Black-backed and Herring Gulls which should have orbital rings in the range of yellow to red. 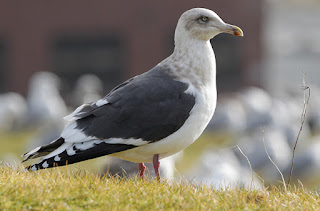 January 22, 2011.  A lightly streaked headed bird but note the streaking as is typical for SBGU includes the whole neck. You can't see it so well on this picture but the streaking on the breast usually rounds off to a neat rounded bib on the upper chest unlike LBBG or HERG or hybrids. 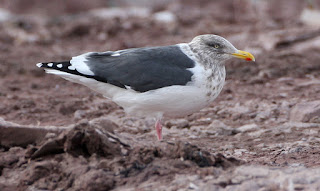 A heavily streaked Slaty-backed Gull arriving a month earlier than any other on 27 October 2008. Note the brightly coloured bill, especially the base, which like Glaucous Gulls becomes pinkish on adult Slaty-backed Gulls in winter. 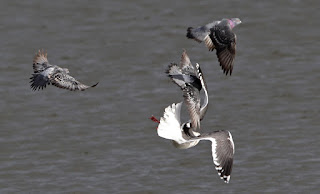 Life of leisure is no guarantee even for Siberian royalty in St. John's when an eagle flies over and every bird panics.   This pigeon sideswiped a Slaty-backed Gull during a mass exodus caused by a low flying Bald Eagle. The upper parts are somewhat over exposed in this photo. 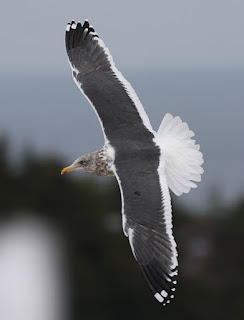 One of the standard wing patterns of Slaty-backed Gull. P8, the third outer most primary can be total dark like this with this bird or can show a 'pearl'. 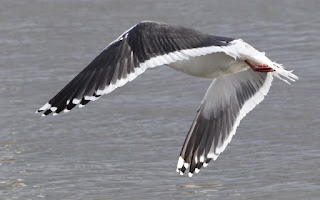 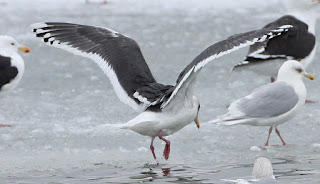 Posted by Bruce Mactavish at 15:27